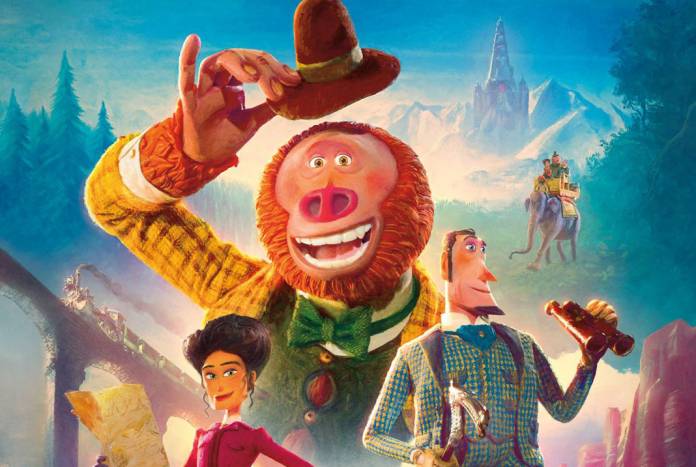 Missing Link is the latest film from Laika Studios (Coraline, Paranorman, The Box Trolls, Kubo and the Two Strings).

It tells the story of a lonely sasquatch, Mister Link (voiced by Zack Galifianakis), who asks famous adventurer Sir Lionel Frost (voiced by Hugh Jackman) to take him to live with his cousins, the Yeti. This will be a mutually beneficial arrangement that will fulfill both of their dreams: Link will be with others like him and Sir Lionel will get proof of a legend and will finally be able to join the exclusive Adventurers’ club. The only thing they need is a way to find Shangri-La. Enter Adelina Fortnight (voiced by Zoe Saldana), widow of an adventurer friend of Lionel’s who was an expert on Yetis. She is now in possession of her husband’s map to the fabled city.

Eventually, Adelina joins the quest to the Himalayas, not trusting selfish Lionel to adequately look out for Link. In addition to the usual obstacles for such a long journey, the trio is also faced with trouble in the form of thugs employed by Lord Piggot-Dunceby (voiced by Stephen Fry), head of the Adventurer’s club, who is determined to keep Lionel from succeeding and joining the club. The head of the thugs is the bounty hunter Willard Stenk (voiced by Timothy Olyphant) who would like to make a trophy out of Link.

It all comes to a head when they reach Shangri-La and meet the Yetis. The place isn’t quite the utopia they had heard of, and Lord Piggot-Dunceby is determined that they will never return from the city. Through all this, the trio learns some lessons about friendship and finding your place.

Missing Link features Laika’s signature stop-motion animation and a distinctive look. It blends realism in the water flowing down the scales of the Loch Ness Monster and the fantastic in the pointy triangle shape of Sir Lionel’s nose. It boasts a brighter, cheerier color scheme than some of the previous Laika films in order to match the optimism of its central character.

The movie isn’t Shakespeare. It has no deeper philosophical meaning or life-changing questions to ponder after you leave. Which may be why some critics (including the one in my local paper) don’t rate it too highly. It is a family-friendly feel-good movie in the true sense of the word. Its lighthearted humor and gentle themes of friendship and belonging will cheer you and leave you feeling just a little bit better about things.

Rating 3 out of 5 for family-friendly fun.