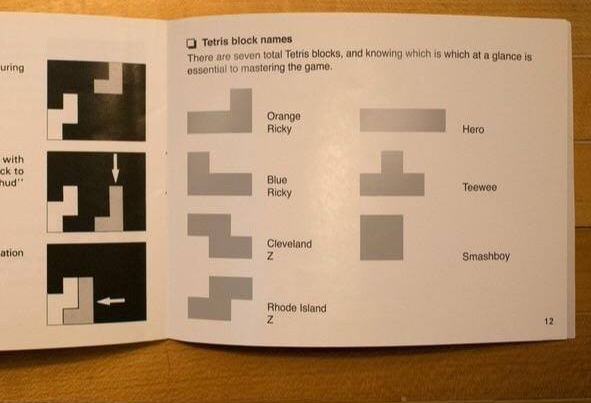 Did you know that the blocks in Tetris actually have names? Fascinating enough when you google “Tetris Block Names” it only shows that they are called tetrominos and are bricks consisting of an arrangement of four blocks.

There is no mention of the sweet little adorable names that were assigned by Nintendo.

Someone posted online a picture of the inside of the Tetris booklet that Nintendo had put out with the game. How could the world have forgotten that the bricks in Tetris had such beautiful names as Orange Ricky, Blue Ricky, Hero, Teewee, Cleveland Z, Rhode Island Z, and Smashboy.

I don’t think it will be possible for me to ever play the same way again. Especially now that I know that my favorite blocks name is Hero. Because it totally is the “hero” of the game, believe me if you set up the bricks right and leave a row open you get Tetris after Tetris. I don’t want to toot my own horn here but I can score pretty high on that new Tetris 99 game that just came out.

What do you think of the names of the blocks? Are they fitting to the design of the brick? Tell us in the comments!