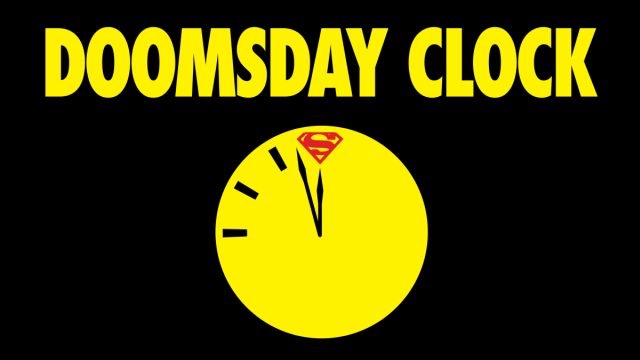 It’s been like three months since comic book stores have seen the latest chapter of DC’s Doomsday Clock hit their shelves. In the meantime we’ve welcomed a New Year, had the greatness of Tom Brady rammed down our throats, and finally got some footage from the final season of Game Of Thrones. Yeah… that’s pretty much 2019 so far.

Now that Doomsday Clock Issue #9 has been released I’m eager to continue my regular coverage. Words cannot express exactly how eager I am because back in December DC dropped what could have been the best issue of series which culminated in the meeting of Superman and Dr. Manhattan that we were promised during the epilogue of “The Button”. Unfortunately their encounter took place in Russia and threatened the harmony of metahumans with the world. 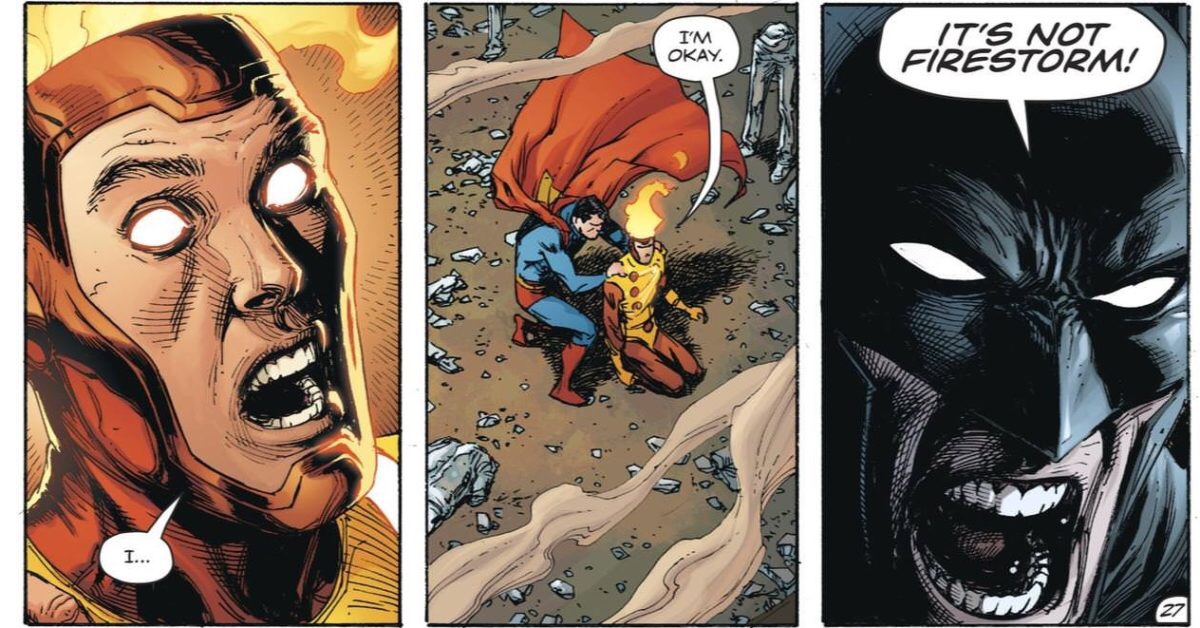 Sides have been chosen. Some view Superman as a hero who saved a fellow costumed hero though others view his actions as an attack. An event that could bring the Metahuman Arms Race to a superhero world war. Superman recovers from the incident inside the Hall Of Justice while protesters gather at the front door. Global tensions are on the rise, fear cripples society creating a veritable oil drum of chaos, waiting for somebody to strike the match that sets it all on fire.

Who better to start this fire than Ozymandias? While he only makes a brief appearance in Issue #9, entitled “Crisis”. It is clear that he is again masterminding a plan. We’re not entirely sure what the desired result is, but I guarantee it’ll be way more deadly than staging an alien invasion and Dr. Manhattan has unknowingly assumed the role as the catalyst. After the blue explosion in Russia, he retreats to the Red Planet to have one of his regular stand in silence and contemplate time sessions.

It must be Dr. Manhattan’s favorite thing to do though he still can’t see the future, leaving the fate of humanity in question. You turn the page to find about 90% of the DC Universe has boarded spaceships and are headed to Mars to confront him.

I’m not joking, literally 90% of DC comic protagonists are on these ships. If you’re wondering how deep the line up goes… Swamp Thing and Constantine decide to tag along for the trip. That deep. 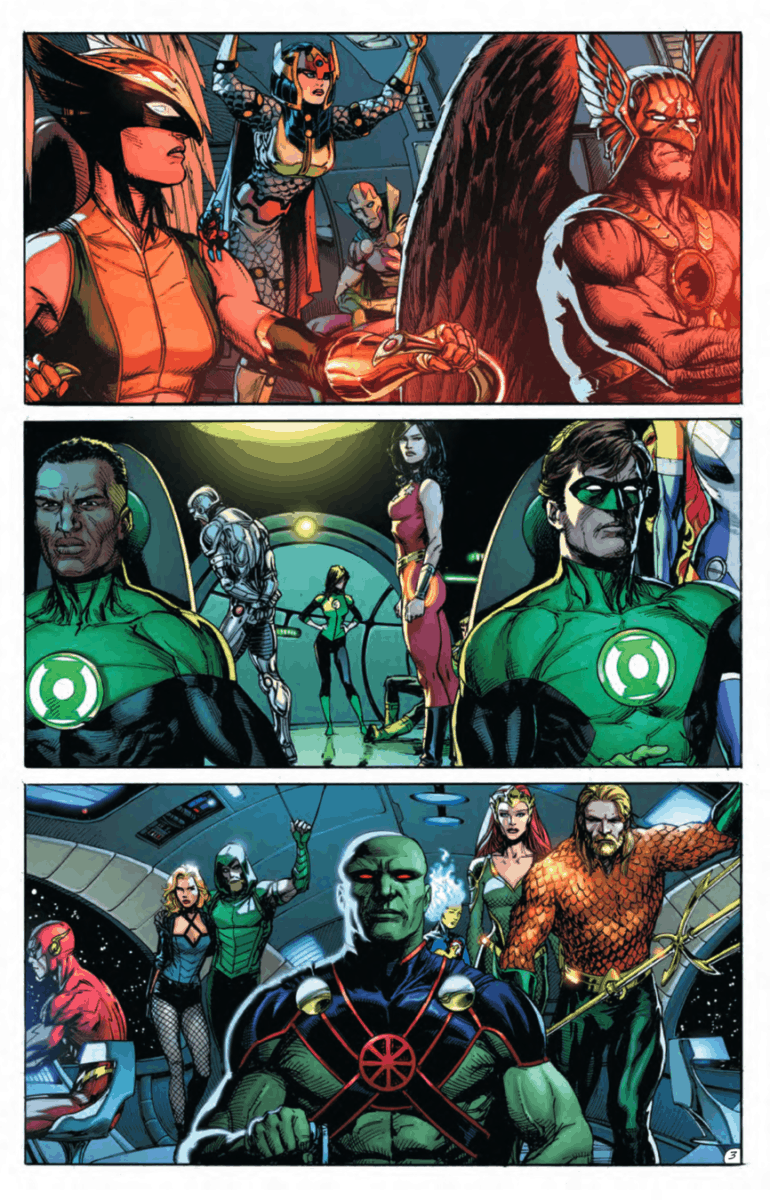 More on that in a second. Before we discuss this encounter, let me highlight a couple quick subplots Issue #9 addresses.

First, Batman is badly injured from the blast in the former Soviet Union. For most of the issue, he’s confined to his bed. But when he comes to, the Caped Crusader decides to warn the other heroes of the truth about what waits for them on Mars.

Superman is badly wounded from the blast as well. Lois keeps him company at the Hall Of Justice while he recovers. Lex Luthor shows up to reveal his involvement in sending Ms. Lane a package that contained footage of the “heroes that never were”. He claims it verifies the existence of a force undermining Superman and all of “creation” and Wally West might be the first victim.

An unmasked Rorschach makes a brief appearance and that’s about it.

If there’s anything to take away from the secondary stories it’s that the Watchmen, sans Rorschach are antagonists in Doomsday Clock. Also they’re such a threat that Lex Luthor has temporarily abandoned his evil genius ways to help the cause of civilization. I’m sure he’ll want land in return. 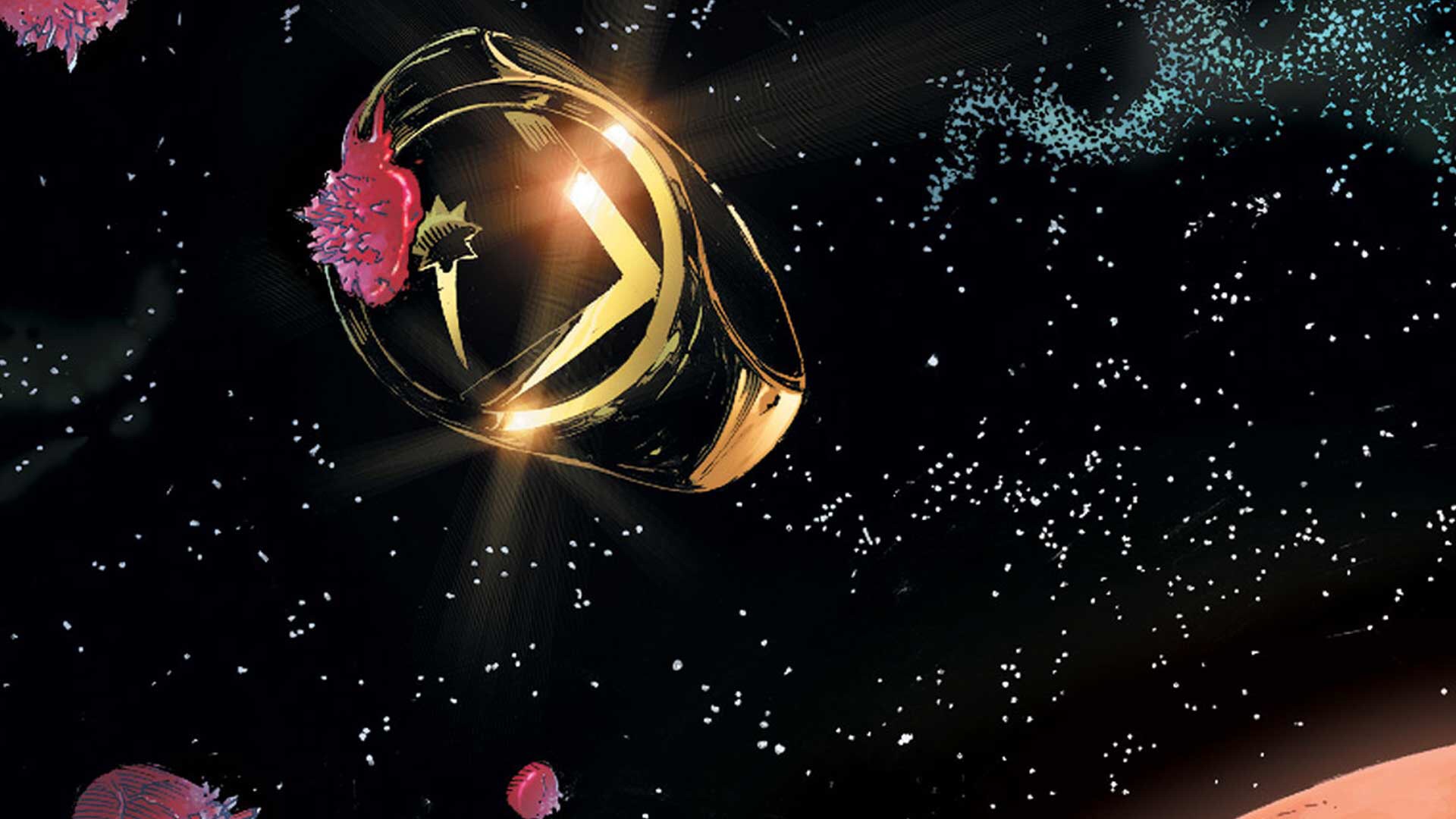 Now back to Mars… the DC heroes arrive and for a second it looks like they might actually stand a chance. Until one of the Green Lanterns throws the first punch. Then it’s pretty much all downhill from there. Dr. Manhattan takes on everyone, fairly easy I might add. Almost toying with each one as he establishes dominance. Even a Green Lantern ring proves to be as valuable as a cheap piece of jewelry. Flexing a power that’s too strong for close to a century of comic book icons to defeat.

It’s bad. And believe it or not but the end was completely given away by the issue’s cover. Second time in two issues a key plot point has been revealed before you even open it. 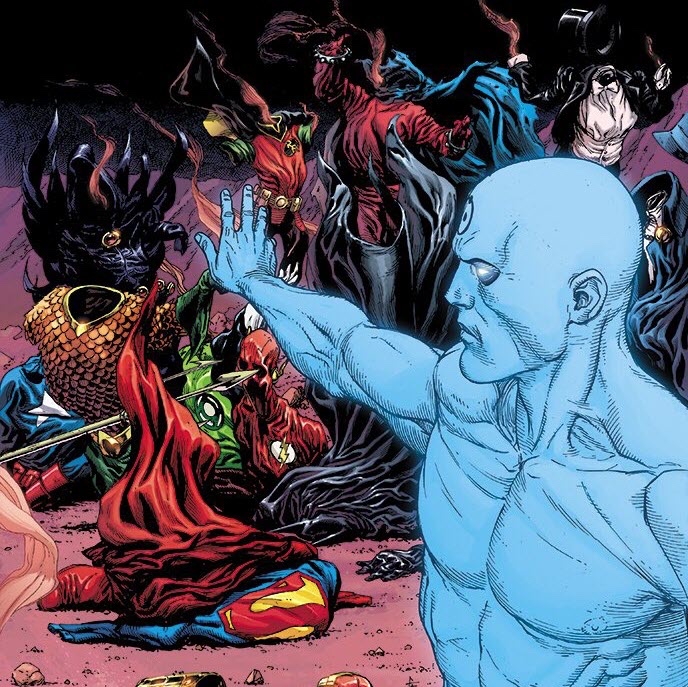 They really need to stop doing that.

I’ve never hesitated to compliment Gary Frank’s illustrations and for the temporary fall of the DC comic universe, the event couldn’t have been drawn better. Almost a surreal Salvador Dali or Beatles on drugs dance of death. 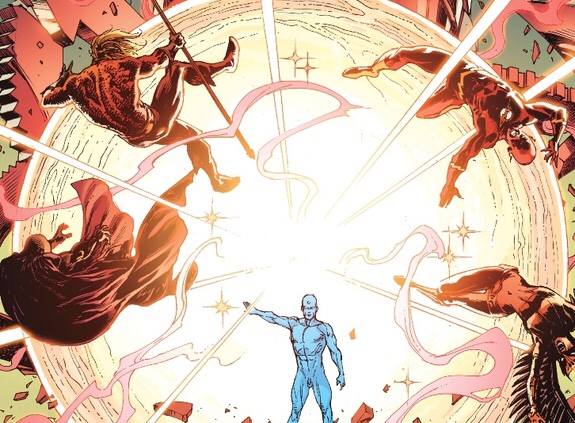 Now comes the part where I have to part where I have to make a statement. When it comes to to the temporary elimination of a bunch of characters. The superhero genre is walking a thin line of repetitiveness that’s impact is on notice. Obviously, Avengers: Infinity War and the twist at the end of Doomsday Clock Issue #9 leave the audience with an interesting twist. But in order for their respective universes to continue, they’re going to need their signature heroes. I’ll give Marvel and DC their one chance to “destroy then bring back” but if in ten years the genre is still reliant on snaps and deadly blue blasts, the entire superhero industry will have become its ultimate criticism… a lack of originality.

Marvel is not killing Black Panther on screen nor is DC sacrificing the Green Lantern to deepen the plot in print. So hopefully it’s out of everyone’s system. There’s only one franchise that should be ending the lives of its main characters out of nowhere and that’s Game Of Thrones.

Finally, the issue closes with Wonder Woman addressing the world, trying to ease their Metahuman concerns. Before she can get started, Giganta rips the roof off the building and Black Adam says he’s “making a move”.

I’m sure whatever he’s doing will set the stage for the final showdown.

What will the final showdown be? Who the hell will triumph as Doomsday Clock reaches the end? Right now your guess is as good as mine. With Dr. Manhattan becoming more of a central figure I’m under the impression anything can happen.

Remember… I’m in this until the bitter end. Though I hope everything wraps up before the HBO show premieres which would maybe maybe mean we’d get the graphic novel form of Doomsday Clock (with extra content fingers crossed) right in time for the holidays. I couldn’t think of a better Christmas gift for myself.

Hopefully we’ll continue our discussion again in two months. If there aren’t any delays.

What are your thoughts on the elimination of basically everyone good guy except for Batman and Superman? Let Nerdbot know in the comments!!