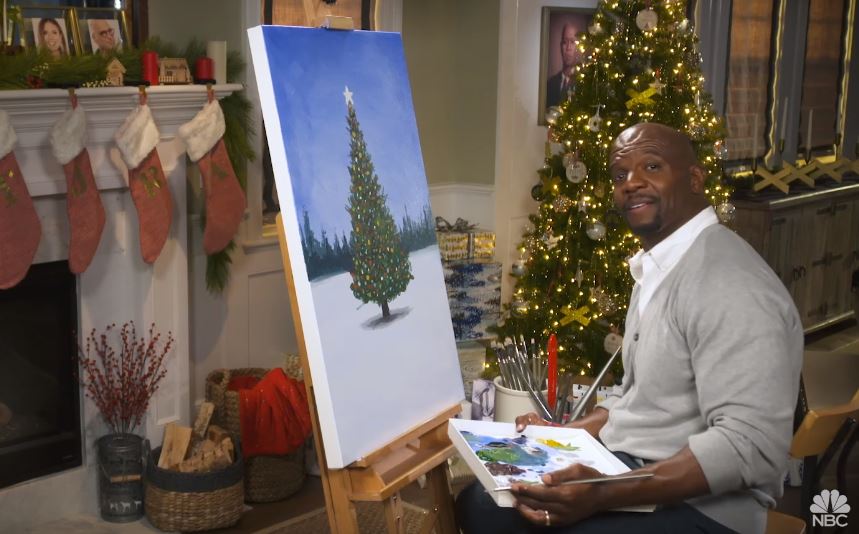 Earlier today NBC started a 24 hour live broadcast of Holiday entertainment. Part of the programming was Terry Crews painting in a Bob Ross fashion. In “A Very Terry Christmas” we were able to sit back relax and “Get Cozy with Terry Crews”.

If you wanted something chill to watch or turn your brain off to this is it. He is set up in the most relaxing atmosphere, Fire going and stockings hung and Christmas spirit escaping from every part of the screen. He talks to us throughout with his soothing voice and flashes his million dollar smile.

Fortunately if you missed this broadcast YouTube has it up and ready for your viewing pleasure.

Terry Crews is an American actor, Comedian, Artist, former NFL Superstar and activist. Really though is there anything Crews can’t do? You can catch his most recent work on Brooklyn Nine-Nine as Sergeant Terry Jeffords.

I cant wait to see if this painting will be hanging on the wall in the new season because I’m not sure but I think this may be canon to his character. Why else would a picture of Captain Holt be peering behind the Christmas Tree?!

What do you think of the broadcast? Are you into it? Tell us in the comments!