After 6 solo movies, two reboots, a Venom spinoff, and several aborted cinematic universes, what more could yet another Spider-Man movie provide for audiences? Well, don’t hang up the webs just yet, because this is one you have to see!

Spider-Man: Into the Spider-Verse marks the Marvel hero’s first ever animated movie. After the death of Peter Parker at the hands of the Kingpin, teen Miles Morales must learn how to use his newly acquired spider-powers to save the city from an inter-dimensional collapse. Along the way, he meets several Spider-Men from alternate universes who each help teach him what it means to be a hero. 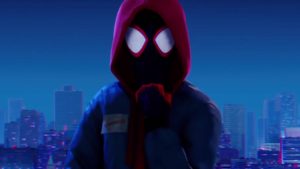 This film could have easily been a cheap cash grab. For the last ten years, Sony Pictures has struggled to keep their Spider-Man properties relevant in the wake of Marvel’s massively popular MCU. But with the producers behind The LEGO Movie on board, Into the Spider-Verse is one of the most honest and heartfelt superhero movies in years.

Miles, voiced by Shameik Moore, is a perfect protagonist, echoing the classic traits of a Spider-Man origin story while feeling completely unique. Miles’ transformation from a teen struggling with expectations to a superhero is well-developed and feels earned. It’s also nice to see the character finally getting a major spotlight after seven successful years in the comics. 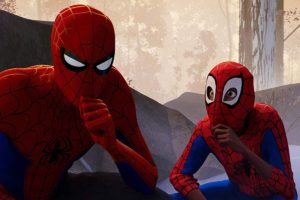 That’s not to say Peter Parker doesn’t make an impression, too. Jake Johnson’s turn as the original, albeit washed up, Spider-Man from another dimension is an immediate scene stealer. His schlubby “making it up as I go along” personality makes him a constant crack-up. As a New Girl fan, I was worried that Johnson’s distinctive voice would be a distraction, but he disappears into the role. From now on, it’s going to be this Spider-Man’s voice I hear when I read the comics. 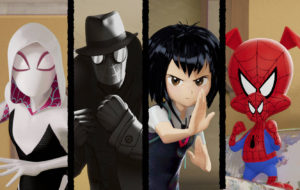 The other Spider-Men each make a decent impression, as well, but if you’ve seen the trailers, you’ve seen most of what they have to offer. Spider-Gwen gets the most to do and has some excellent fight scenes, but skipped the opportunity to address Peter Parker meeting an alternate version of one of his greatest (and dead) loves. Nicolas Cage provides some laughs as the melodramatic Spider-Noir, as does John Mulaney’s Spider-Ham. I didn’t care much for the anime-inspired Peni Parker and her SP//dr mecha, but the character’s been popular enough with fans. Even with all these spiders running around, though, the movie never forgets that Miles is the star.

While the story and characters are stellar, it’s the way the filmmakers manipulate the animated medium that make this movie a must-see. Into the Spider-Verse is an absolute feast for the eyes and ears. The movie presents a stunning vision of New York City, making it look like Spidey is swinging through a neon fantasy world. The climax in particular takes advantage of the medium, creating a setting you could never see in live-action. I couldn’t even begin to describe it. 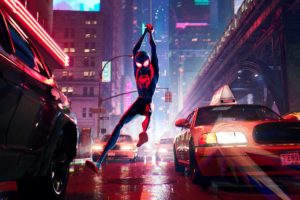 The music amps things up even more. Both the original songs and the score by Daniel Pemberton fit perfectly. Just wait for the moment when Pemberton’s theme merges with new song “What’s Up Danger” by Blackway and Black Caviar. If you don’t get goosebumps, you’re not paying close enough attention to the movie.

Into the Spider-Verse re-establishes what makes Spider-Man so special among superheroes. The heart, the humor, the kinetic feel of the action. Everything that people have loved about Spider-Man over the years is on display here in a completely fresh way. This movie isn’t the series settling into franchise fatigue. This is the start of something even greater than what came before.

What did you think of Spider-Man: Into the Spider-Verse? Let us know in the comments!