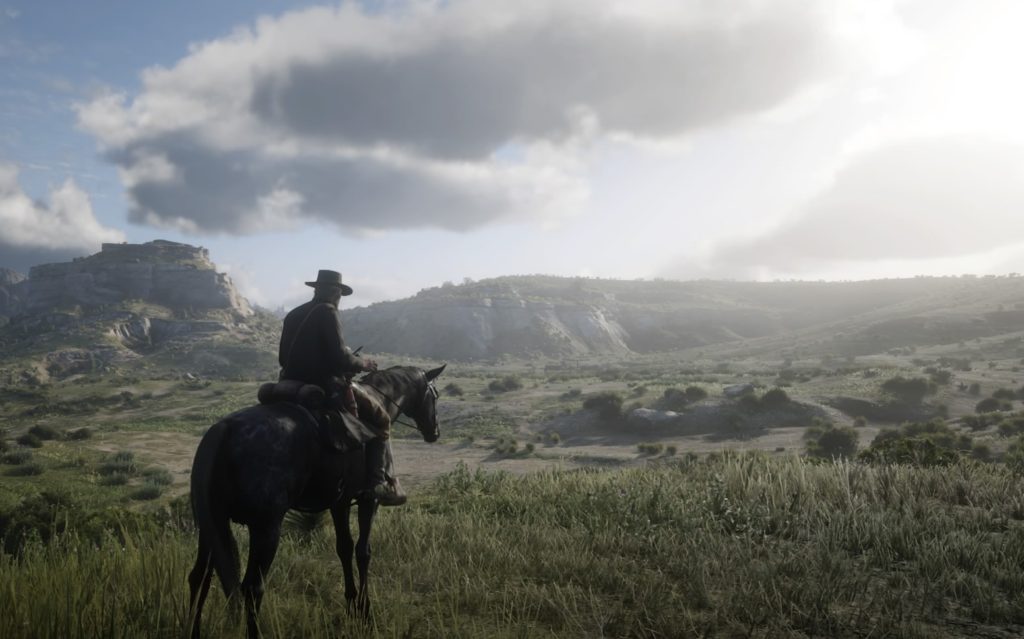 I woke up to a crisp morning, the clouds making their journey over the mountains to unknown lands. The campfire was already started when I made my way over to grab a cup of coffee. I took my time, enjoying little sips watching the birds dance with a lilting song above the trees. It would soon be time to mount up on Brego, my horse, and hunt for the day’s meals.

Did I just describe my latest camping trip? Well, no. Mostly because I couldn’t keep a damn fire going to save my life, which I discovered is directly tied to how much I feel like a man, but that’s a different story. I just described playing a video game. Yes, a video game that allows you to take slow sips of coffee while admiring the beautiful open sky and snow-tipped mountains.

Red Dead Redemption 2 has arrived eight years after the first allowed us to live all our Clint Eastwood fantasies. I could sit here and do a typical review or first impression article. I could go through the gorgeous graphics, the fluid game mechanics (especially the horse riding which has never felt better), or I could go on and on about the incredible open world. By now, let’s face it, you already read about all that stuff. As a storyteller myself, I want to hone in on what works so right for this game when it comes to getting our complete investment.

I talked about how I hoped this game would be like the first and create something that I couldn’t stop thinking about, and already it has done just that. The characters feel real, the world is more alive than any other game I’ve played, and all I want to do is live that rugged outlaw life day by day. That’s what this game does, it immerses you entirely in the life of someone else. It is through the little details that the story begins to unfold.

There will be some minor spoilers through the article, I will warn you. I haven’t gotten past the Chapter 2 segment of the game so you won’t have to worry about me spoiling some crazy stuff that happens at the end because I have no idea what is going to happen yet!

Red Dead Redemption 2 is the kind of game that sucks you in so completely that you don’t even realize that you are taking time out of your life to bathe a make-believe character in a virtual world. Sure, I’ll spam “X” to scrub my right arm. Then you go back to reality at some point and have to laugh at least a little bit. That’s what this game is going for though. It wants to take it’s time to make you feel like you are alive in this different world. You are an outlaw, scratching out a living with your fellow gang members and every single detail directs the story to make that feel as realistic as possible.

It’s the little things that have been making the biggest difference for me. I roam the heartlands of America, discovering abandoned towns with tragic stories and other outlaws bringing that tragedy somewhere new. Then I get back to camp just to see what’s new and pull out the journal Arthur, your character, has been keeping. It is full of little scribbles of drawings and notes about the places I’ve seen. I’m not just talking about the places that you can purposefully track in there either. There’s little doodles of the people you’ve helped, or hindered, and scenes of things that have happened that he has taken the time to jot down. It’s that little flare that makes Arthur seem real.

That’s the key, isn’t it? The characters need to feel like they aren’t following scripts and paths that have been constructed by a developer. They need to feel like they are actual people that you care about. This is challenging when I’m used to hearing the same lines over and over again, and the AI of an NPC wander through the same roads in town. How many times did we hear the “took an arrow to the knee” line in Skyrim?

I found myself starting the game excited to have John Marston back in action, even if it was alongside my new main character. Yet, it was the other members of the gang that began standing out almost instantly. Each one has a unique personality that makes them feel distinct from one another. There’s a beautiful blend of originality and western tropes that make them completely fresh. Arthur, in turn, has unique relationships with each of the members ranging from wishing to all that is good that Dutch, the gang’s leader, would have never picked that person up in the first place, to having a long history and good friendship from the early days of the gang, years prior.

One of my favorite relationships is with John Marston. Rockstar could have taken the easy route and made John and Arthur CBFF’s (Cowboy Best Friends Forever), but they took a different approach. At first, I thought Arthur just enjoyed teasing John, who seems to be the golden boy of the gang, but there’s a history there. John left the gang for a year, ditching the make-shift family that raised him, probably to try and raise his own family, but the details haven’t come out yet. Arthur is all about gang loyalty, bringing in food, medicine, and supplies constantly to keep the group running smoothly. Leaving it would be the ultimate betrayal, and John Marston was welcomed back with no consequences. Arthur can’t let it go. I can’t wait to see where that leads.

That level of thought to each character, especially Arthur, is what allows us to take that bold step into full immersion. It is, after all, a role-playing game. We are meant to step into another role entirely. I find myself really trying to see just how Arthur would approach everything he encounters. It would be easy just to shoot everything in your way, but this game allows for nuance, so why not indulge in it?

I came back to camp to drop off some poor bastard of a deer to supply the gang, and I was told about a letter that came in from Mary. This Mary was some old flame, that became clear immediately, and she wanted help, even though the story already starts talking about the husband she ended up with and the falling out she had with Arthur. What would Arthur do? (I should make little WWAD bracelets). Well, the past is the past, I didn’t go riding off immediately to take care of this.

This led me to helping Lenny, a fellow gang member, try to forget his troubles. He and another gang member, Micah, got into trouble in another town. Micah went murdering again and now stands to hang after a trail. Lenny is a younger member of the group and needed to get his mind off things. So Arthur takes him down to the saloon to drink away his worries. One hell of a night ensues, and it’s one of the more accurate depictions of getting completely plastered I’ve seen in a video game. Uh, not speaking from personal experience, of course.

Scenes stitch together with obvious gaps as Arthur begins to black out. There’s dancing and slapping each other for no reason, falling over in the mud, and thinking every person in the place is Lenny. It’s pretty amazing.

At some point though, Lenny asked why Arthur never got married to which Arthur shrugs off and says no one will have him. After recovering from the hangover, Arthur reflects on this. Or at least, that’s how I played it. It was time to go see that old flame and see what the hell was going on.

After a good bath, Arthur heads over to where Mary is staying. There’s some genuine reluctance and hurt in Arthur’s voice as he begrudgingly agrees to help her little brother. Once the brother is retrieved, there’s some heartfelt conversation about how he wishes that Arthur and Mary would get back together. Arthur was good to him, a father figure of sorts. It adds layers to the character.

In the end, though, Arthur is an outlaw for life. Things won’t change and time won’t take away what he’s done. Mary and her little brother catch the train as Arthur watches them go. He writes in his journal, sketching out a few doodles and reflects on how he can’t stop her from playing on his heart. Pretty deep for a man who just punched his way through a saloon and shot a guy for looking at him the wrong way.

That’s when I remembered Micah, sitting in a jail somewhere, waiting to hang. The family and life Arthur could have had was gone. It was, perhaps, foolish to think that things would change after all these years. The gang is Arthur’s family now, and even the black sheep of that family needs to be looked out for. So I rode off to save Micah from himself.

Wait…I was playing for how long? That’s just it. The storytelling comes from being able to really step into the shoes…boots of another person. It allows for that role-playing aspect to take center stage and it’s a beautiful mix of characterization, a living world, and the smallest of details.

I wanted a legacy and what I’m getting is another life.

Did RDR2 live up to your expectations? Let Nerdbot know in the comments!