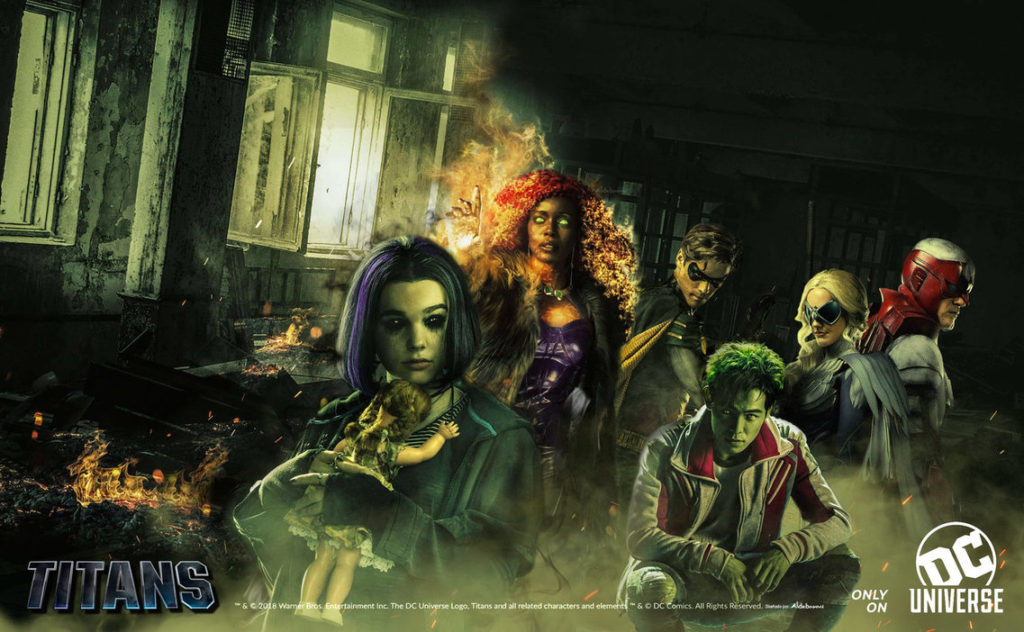 Like many other TV watching nerds, I was skeptical about DC Universe’s Titans series. I was made even more skeptical after attending San Diego Comic-Con, where Starfire’s gaudy fur coat and unflattering wig were on display at the DC Universe installation in the Gaslamp District. But apparently a well-paced superhero mystery ensemble set in a charmingly gritty DC Universe is enough to overcome one or two poor wardrobe choices. The first episode of Titans dropped on the DC Universe app Friday, October 12th, and already critics are raving over how well the live-action adaption of the Marv Wolfman/George Perez “New Teen Titans” series takes a modern approach to an 80s comic book.

Titans follows a group of uniquely gifted young adults as their stories collide with one another through a series of macabre events centered around a teen girl named Rachel Roth, AKA Raven (Teagan Croft, The Osiris Child). Batman’s former teen vigilante partner Dick Grayson, AKA Robin (Brenton Thwaites, Maleficent), is a young Detroit police detective struggling to find his place in a world where he no longer answers to his mentor. Grayson adamantly resists working alongside his peers, citing issues with the draconian nature of his “previous partner,” but eventually elects to bring his old Robin persona out of its yearlong retirement to once again enact street justice against those the system fails to punish. When Grayson encounters a transient Roth at his precinct, the strange girl (whom we learn early on has demonic powers) confesses to witnessing the decades-old murder of his trapeze artist parents in her cryptic dreams, also adding that a murderous group of strangers is pursuing her.

Later in the pilot episode we see glimpses of Kory Anders, AKA Koriand’r, AKA Starfire (Anna Diop, 24: Legacy), fleeing from another shadowy group of killers outside Vienna, Austria. Why is Starfire outside Vienna, Austria fleeing from armed thugs in a gaudy fur coat and unflattering wig? Even Starfire doesn’t know, as she is suffering from amnesia most likely brought on by a recent shootout. When she finally does use her powers she seems just as confused by them as the goons she uses them on. Much of what we see regarding Starfire adds to the general mystery of the show, but what we do know is that whatever her mission may be, it is also somehow linked to the demon girl with blue highlights — Raven. Gar Logan, AKA Beast Boy (Ryan Potter, Big Hero 6), also makes a brief appearance in the first episode.

While it is hard to judge an entire series based off of a pilot episode, Titans comes right out of the gate at full speed, not giving one red cent if you know anything about the ensemble of characters. Will having prior knowledge of the teen sidekicks give you a greater appreciation of the characters? Certainly. But not having any knowledge of the characters at all adds an extra layer to an already juicy mystery the show sets up in its very first episode. The characters are recognizable enough to their comic book counterparts to satisfy most fans (except for Starfire’s unflattering wig), yet fresh enough to have general audience appeal. Titans is also quite comfortable earning itself a hard R-rating for its use of gratuitous violence and occasional “F” bombs.

Am I excited for episode 2? Yes, but I would consider myself more curious than excited at this point. This show is taking risks with how it introduces you to these characters. Titans does not insult its audience’s intelligence with pages of spoken exposition, it EXPECTS you to be able to keep up with the plot and characters. Does the plot and the characters stay true to the 80s comics? It follows the spirit of the source material while creating its own modernized universe. One comic book hero noticeably absent from the show is Vic Stone, AKA Cyborg, but you can thank DC’s 2011 “New 52” reboot for taking him off the team and moving him to the “Justice League” books. We will, however, see DC superheroes Hawk and Dove make a big appearance in episode 2. Based off of set photos, Hawk and Dove will follow the source material fairly accurately, with costumes on par in production quality as Grayson’s gritty Robin armor. Put frankly, this show is the personification of a moody teenager — it does what it wants to do and gives you the middle-finger if you have a problem with it. If the show can keep up the high energy mystique of its pilot, I will definitely follow it through to the end of this season.