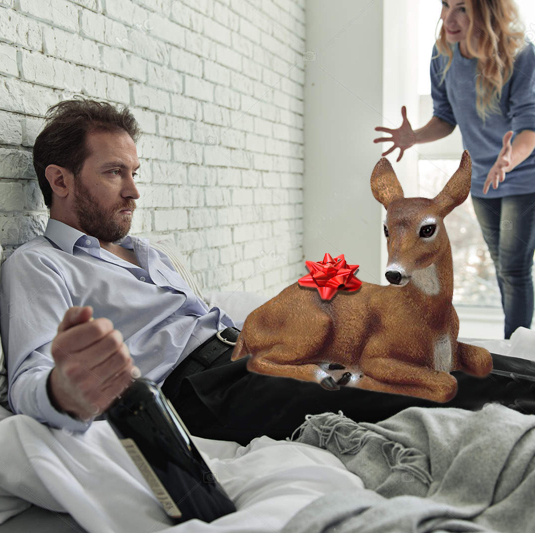 Depressed drunk man is lying on bed. He holding bottles of alcohol and listening to his wife. Angry lady is shouting
Nerd Culture

16 Gifts To Give Someone (If You Freakin’ Hate Them)

This is a “Nerd Voices” contributing piece from Nerdbot reader Aaron Russell. Aaron is giving the gift of laughter…usually…on Twitter. He also has a website devoted to his Photoshop hilarity.

There’s nothing worse than receiving a bad gift. That’s fact. “It’s the thought that counts” only works when the gifter is a kid or broke. And that moment when you have to look your assailant in the eye and pretend that what they gave you isn’t about to go in the trash? Awkward as hell. By giving terrible presents, not only are you now that person, but you’ve turned the giftee into a liar when they have to pretend they weren’t just given hell on earth to spare your feelings. See how much damage is being done? Today on Nerdbot, we asked our readers about the worst presents they’ve ever received and the answers made us wish we got more thoughts that counted instead of this garbage.

“My Mom gave me a K-5 grade school stationary set because she had brain cancer and forgot I was over 30.”

“This one friend only bought me gag gifts. Just something about me must say “corny ass garbage”. A soap pump shaped like a nose that dropped snot. And a painting of a ninja turtle dressed as Mona Lisa to go with my “cartoon trash”. My home is filled with legit cartoon cels and framed art prints!”

“At one of my stepdad’s family’s Christmas celebrations, I received three tackle boxes from three separate people. Three. And I didn’t fish.”

“My mom got a clown to perform for me once when I was a kid.”

“My mother, despite knowing the pale pigment of my skin, got me a mustard yellow sweater that a weird square split on one side that was supposed “flare out,” but it just looks like a reject sweater that wasn’t put together properly and it lets in the cold.”

“My loving grandma, god love’r, always used to give me tourist t-shirts – embroidered with like “Niagara Falls” or “Australia”. Points for effort but as a 14-year-old DESPERATELY trying to be cool, she missed the mark.”

“A box set of four Magic Tree House books from my aunt. I was sixteen when I received them.”

“A couple of kittens as an apology gift for being a jerk. We had no place to stay at the time and now I had 2 cats to take care of. I was pissed. And I LOVE cats.”

“I was 10 and asked for a Game Boy for Christmas. I’m guessing they interpreted it as I wanted a “Game, boy!”. I got a Mega Man 2 Tiger handheld game. It was like getting Putting Challenge instead of Bonestorm.”

“My dad’s mother is notoriously awful at gift giving. I’m about 9 and get a huge package from her out of the blue; it’s full of china animal figurines. She also gave me a Snoopy waffle iron for Christmas when I was 5.”

“My Mother in Law gave me a towel for my birthday a few years back. like legit a bath towel. She tried to play it off like it was a special towel. After the gift opening I excused myself to go to the bathroom and saw the matching set hanging.”

“Fresh cut grass perfume from my Aunt for Christmas. It smelt awful. Who would wear that?”

“My uncle and aunt are like the Dursleys when it comes to gift-giving. It’s like they go out of their way to give you something junky, just to let you know “we remember it’s a holiday, we just want to let you know how much we don’t care about you.” It’d be less offensive to get nothing. But the worst one they ever gave me was literal trash. It was a small, what would be transparent if it wasn’t Sun Stained, plastic box. I assume it might have been used as a jewelry box at one point, because there were holes in this box that looks like maybe tiny little drawers were once in there, but there weren’t now, it was also cracked and warped. it’s like, Happy Holidays and F*ck You!”

“I’m not joking in a secret Santa exchange where the gift was a $20 MINIMUM I got a poorly glued picture from a magazine glued to a piece of wood.”

“A book of inspirational Christian quotes from my grandparents on my father’s side. As someone who they knew isn’t a Christian it seemed inappropriate. I also tend to dislike most books directly designed to be inspirational, so that didn’t help either. Not wanting to be rude I hid it deep in a closet before quietly throwing it away. To this day it is the only book we have ever thrown away.”