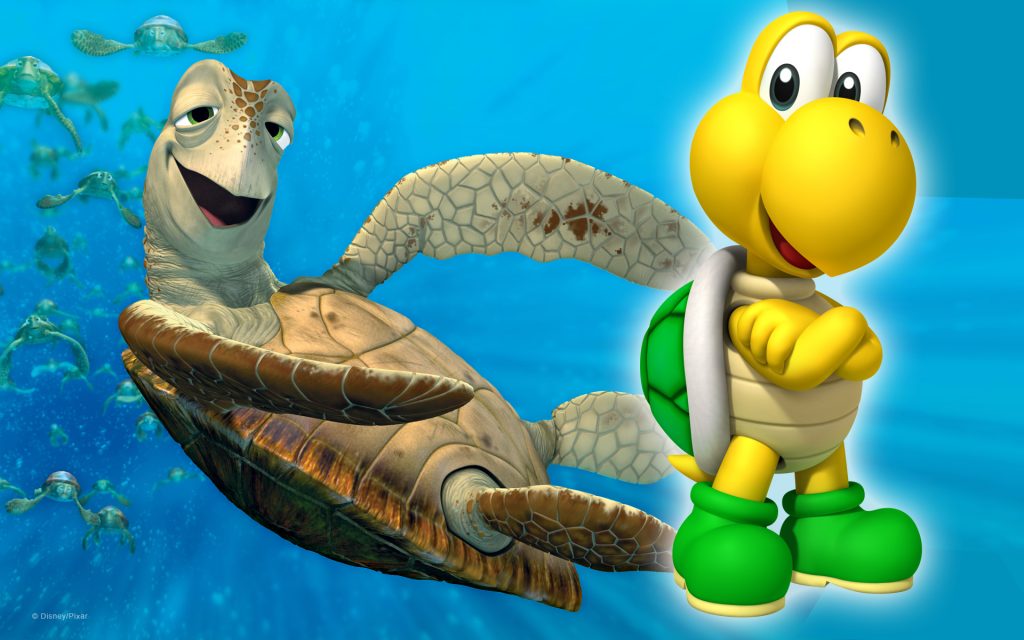 Turtles are the best animal. Period. No questions about it. Forget dogs. Forget cats. It’s all about turtles.

But if there’s one thing that understands my feelings on turtles, its pop culture. Over the years, turtles have been represented in movies and TV shows in a variety of shapes and sizes. And for your reading pleasure (and my personal gratification), I put them all into a ranked list. Let’s take a peek out of our shells and see what the top nine pop culture turtles are!

9. MORLA THE ANCIENT ONE 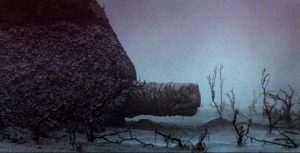 Rounding out the bottom of our list is Morla the Ancient One, from 1984’s The Never Ending Story. When the magical world Fantasia is about to be swallowed up by the Nothing, our hero Atreyu’s first stop is this gargantuan tortoise. Morla has the greatest knowledge of Fantasia’s history and inner workings, simply because she’s lived long enough to see it all!

So why does she hit the bottom of the list? Morla is a major downer, and a tad rude to boot. She lives alone under the mud, talking to herself and complaining about how nothing matters. And what is her solution to stop the Nothing? “Nope, you can’t do it. Give up.” She discourages Atreyu so much that he nearly drowns in the Swamps of Sadness before the first act ends. Definitely not the person to go to if you need a good pep talk. Still, she leaves a lasting impression, even if a depressing one. 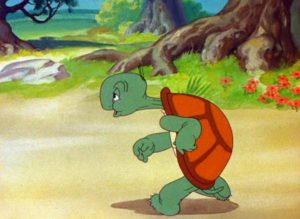 In the grand pantheon of Looney Tunes characters, Cecil is probably not the first one who comes to mind. This small-statured turtle only made three appearances in the classic cartoons, with a mixed bag of cameos in more recent years.

But Cecil has one big claim to fame. He’s one of the only characters to successfully outwit Bugs Bunny. When Bugs challenges him to a race over $10, Cecil calls up his identical cousins to help cheat the rascally rabbit out of the win. That’s right, he’s no slow-minded tortoise. Cecil’s a full-on con-artist! Every time he appears, he’s got some crafty trick up his sleeve to keep himself one slow-and-steady step ahead. 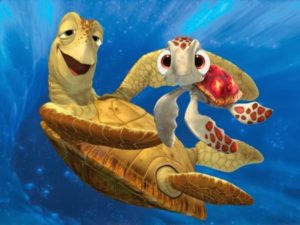 When Finding Nemo was coming out in 2003, you couldn’t turn on Nickelodeon without catching this sea turtle explaining how Marlin was like “whoah.” Crush, along with his son Squirt, are undersea surfer dudes cruising along the East Australian Current.

Not only are they instrumental in helping Marlin find his son, they give him an example of a father-son relationship based on independence and trust. A more positive turtle-based role model has never been seen. Plus, Squirt is just absolutely adorable. In speaking of adorable… 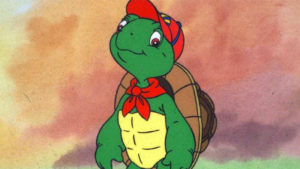 What makes Franklin special is that his stories are so slice-of-life. One episode, he’s trying to get out of playing golf with his dad. In another, he’s learning the hard truth behind the “finders-keepers” rule. These are normal conflicts kids face every day. Except that Franklin is a turtle with a bandana and a very chill theme song. 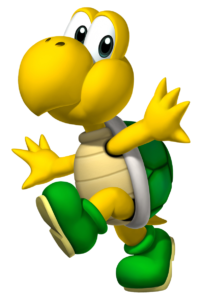 If you want to save a princess, you’ve got to break some shells. The Koopa Troopas are one of the most enduring enemies from Nintendo’s Super Mario franchise, appearing mere moments into the first game. They come in a variety of colors and types, too. My favorites are the Paratroopas with the angel wings.

Koopa Troopas have appeared in nearly every Mario game, and have even become playable in spin-offs like Mario Kart and Mario Party. They’re such a fan favorite, you almost feel bad stomping on them. At least, until their empty shells ricochet off the wall and kill you. They may be cute and happy-go-lucky, but they’re still the bad guys. 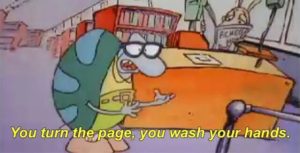 You go down the list, you wash your hands. Filburt Shellbach is Rocko and Heffer’s high-anxiety friend from Rocko’s Modern Life. He jumps from job to job, is quickly nauseated, can’t eat sugar without going on a vicious rampage, and is easily the most relatable turtle on this list. I know I’ve had my moments obsessively deciding which potato chips to eat and in what order. Who hasn’t? 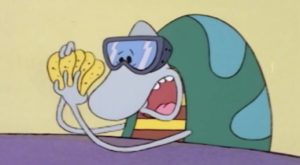 Filburt is the neurotic cynic so many of us grew up to be. But he’s also a character with growth. Over the course of the show, he went from a single turtle living by himself in a trailer to a loving husband and father of four. Not a bad progression for a wacky cartoon from the Ren & Stimpy era.

3. SQUIRTLE (AND HIS EVOLUTIONS) 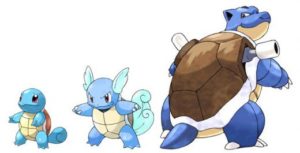 The original water type Poke’mon, Squirtle stands out for his simple yet alluring design. He’s also the starter who gains the most from his evolution. Wartortle is a bit of an awkward teen phase, but Blastoise is an absolute tank. Powerful and commanding, Blastoise is the one to beat. 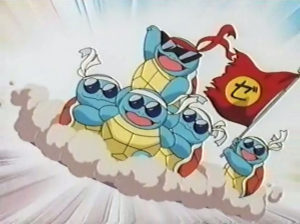 But that’s not to say Squirtle wasn’t tough to start with. When Ash and his friends first meet him, he’s leading a Squirtle gang, robbing travelers and rockin’ killer shades! This is one turtle with a ton of attitude!

How does a turtle get off it’s back after it falls over? If it’s a prehistoric dino-turtle, it pulls into its shell and takes off like a flying saucer! Gamera (sometimes Friend of All Children, sometimes Guardian of the Universe) was Daiei Film’s answer to Toho’s Godzilla. Gamera is best known for his jet-propelled flight, but he’s also capable of spitting fireballs. 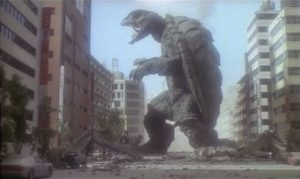 What started as a cheap imitation became a massive franchise in its own right, spawning tons of sequels and reboots. Gamera’s early outings are pretty silly, most of which have been riffed on Mystery Science Theater 3000, but his newer movies are some of the best respected films in the genre. Definitely worth checking out! 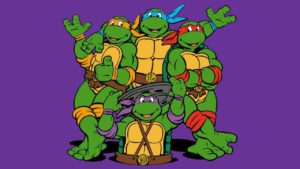 Come on, you knew this was coming. The Teenage Mutant Ninja Turtles are the ultimate turtle property, spanning comics, cartoons, live-action movies, and toys. Trained in the ninja arts by Master Splinter, the Turtles (Leo, Mikey, Donnie, and Raph) face off against Shredder, the Foot Clan, and the alien Krang. When they’re not doing that, they’re eating pizza and being totally radical!

TMNT has been an institution since the mid-80s. It’s led to several imitations, such as Biker Mice From Mars and Street Sharks. But they all lacked what TMNT had: a spark of true creativity…and turtles.

What’s your favorite turtle from the pop culture zeitgeist? Let us know in the comments!