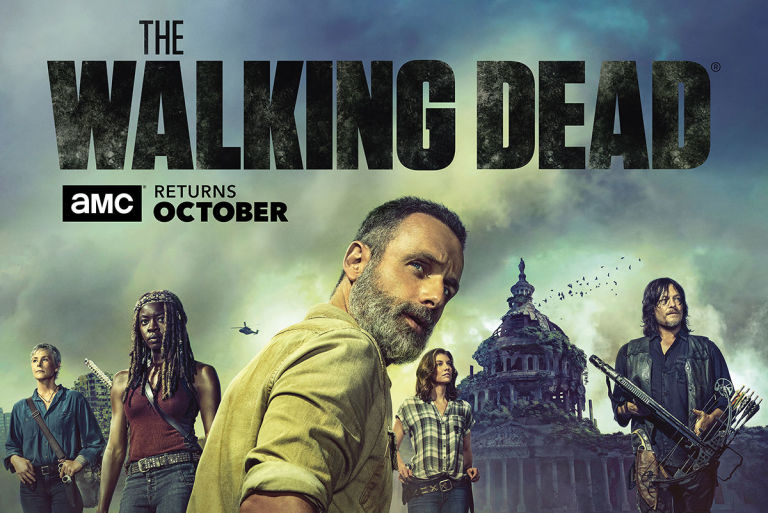 No Cure for The Walking Dead

Congratulations, The Walking Dead, you’ve finally confirmed the “news” that Andrew Lincoln will not be returning after Season 9. The news that has been rumored, leaked and reported for months. Hmmm, I wonder how old Rick will exit the show. Alien abduction? He gets the old Skrillex cover band together and decides to tour the country? I see Rick as a secret dub-step fan. Or are you simply looking for a ratings spike when all of your strayed flock begrudgingly tune back in for Rick Death Watch 2018?

Look, let’s face it, WD, you’ve been playing this game for a while and, well it’s gotten pretty old. I say this as someone who used to love you. They say imitation is the sincerest form of flattery, if that’s true, you are mighty in love with yourself. Since season two, your M.O. has been finding a settlement, utterly destroying it and moving on to the next impenetrable utopia. No –don’t speak. Don’t tell me that your reasons for burning down a community occasionally varies. Who made the Grimes Gang judge, jury and executioner? So what if Herschel wants to keep a zombie petting zoo in his barn? My neighbor has like forty cats stored in her apartment, it would be considered impolite if I was to free them all and burn down the building.  Why couldn’t they leave Woodbury alone? They had rummage sales and lemonade, what’s a little zombie gladiatorial matches? Sure, the Governor collected pickled zombie heads like Funko Pop, but I’ve seen weirder stuff on Etsy.  Everything was fine until you meddling kids showed up and started snooping around.

Ah, but you interrupt, Terminus! They had to destroy Terminus! Sorry, they lucked into Terminus being filled with cannibals. Or else they would have staged a coup to fight the use of generic fabric softener. By the way, how does one so quickly broach the idea of turning an entire community into cannibals? That’s kind of an awkward thing to bring up at the town meeting. “Hey guys, Todd here. Hunting and farming sounds hard. How about luring people in with miles and miles of cryptic signs, hoping they trust them and then, I dunno, butchering and eating them? Of course, we would torture them a little and provide some window for escape, that’s a given.” Remember, the timeline we’re going on here is probably a year or so after civilization collapsed, and they seemed pretty organized. How early into the game did Todd bring this up? Who was the first guy to cough, shuffle his feet and vote “Yea”?

Then there was Alexandria.  No one was a cannibal, no one had jarred heads displayed like Precious Moments tchotchkes on their living room. Hell, they had committees and crudités. The Grimes Gang shambles in like a bunch of troglodytes, grumbling about how “soft” the citizens are, even after they are given mini-mansions and begged to bathe. “You poor babies! Here’s the keys to your four bedroom, two bath and some fresh towels. Use them. You smell like expensive cheese.”

This used to be an exciting show.  This used to be a show where anything could happen, main characters could die and there was a gore and tension as yet unseen on network TV. This used to be a show that one made an appointment to watch, an oddity in the era of streaming and DVR. There was drama above, “How do we kill this guy?”, comedy and above all, a couple likable characters (I cannot believe that I am saying this but –I miss Lori. I know, I know, but I’d trade Lori any day for some of the one-note zombie bait that has wandered through the show, waiting to get their showcase on Talking Dead). Then, certain fan favorites became untouchable. Darryl rides an enormous chopper with the muffler practically dragging behind it and is as safe as kittens. It became so that that it was easier to predict the death of a minor character (suddenly thrust into a brief character arch to at the very least teach us their name) than the city bus schedule. Michonne became a clingy girlfriend and Carl, somehow, got even more annoying.

Now as the show is waning and viewers are finding better ways to spend their Sunday nights, you start lobbing cheap stunts at us. “Glenn is dead –for real this time! See, we’re willing to reluctantly kill off a fan favorite! Did we mention the tiger? Yep, there’s a tiger now. And Carl –forget about him, gone!” Don’t try to tell me what did or did not happen in the comic –you’ve strayed away from that so many times that it’s like me trying to do an adaptation of The Grapes of Wrath, but when they get to California, Joad gets killed by a samurai, a pair of new, sexy Russian twin sisters discover adamantium and instead of grapes its cranberries. And the cranberries are actually mutants from space. Without any sort of wrath.

This announcement of Lincoln leaving, like Chandler Riggs before, is a ratings ploy. We all know Rick is going to die. He’s not going to decide to quit being a raspy voiced despot and proceed with his dream of touring the vineyards of France. It’s just a matter of when he dies, and how many episodes we’re willing to watch to see it take place.

The new season seems like it will be taking place in the future, perhaps affording the opportunity for a fresh start. The trailer looks exciting, but good editing and score can make a trailer for lunch in the office break room look like a Michael Bay movie (Fast cut of a  cheese sandwich being unwrapped -close up of coffee dripping -a door opens -cut to black! Lunch Coming Noon on Monday).

It also looks like more of the same infighting with settlements. I’m hesitant to give you another chance Walking Dead. You’ve made so many promises and it just seems you’re not willing to hold up your end of the bargain. Is killing off Rick a bold move or just your version of a mid-life crisis Corvette? Or rather, a used Miata with broken power windows and a Shaggy CD stuck in the stereo? Only time will tell, and I’m not sure how much we’re willing to give you.

Are you excited for Season 9 of The Walking Dead or did you lose interest long ago? Let Nerdbot know in the comments!