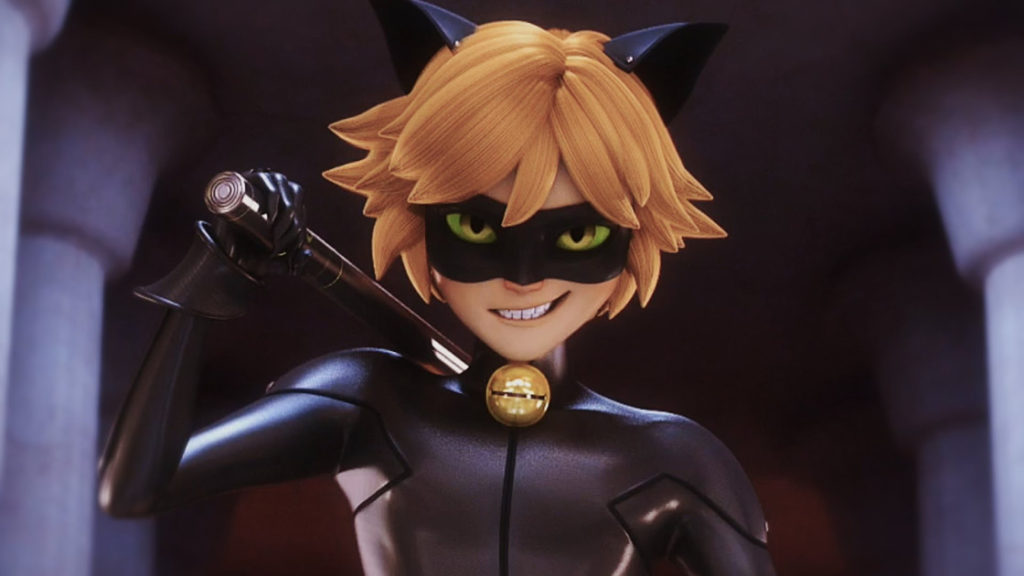 The gist of the show is simple: Marinette is a teenage girl with a crush on her classmate, Adrien. Marinette transforms into Ladybug, a superhero with a male partner called Cat Noir (stylized as Chat Noir among die-hards, thus we will address him as thus for the duration of the article). Chat Noir has romantic feelings for Ladybug. Neither know each other’s civilian form. Chat Noir’s civilian form is Adrien.

We have a premise.

Now, because it’s imperative for children to have strong female role models/see girls doing the same things males do, it’s completely understandable that the creator and showrunners chose to have the show following Marinette. Unfortunately, they made a mistake. Because she’s not the star of the show. The core story is hardly even about her. Truthfully, this is Adrien’s story. We need to see more Adrien because he is a somewhat tragic yet totally fascinating character. He is a flawed hero who should have the spotlight on him because he is so damaged.

What is Marinette’s story? Well, sadly, it’s not very complex. She’s a cookie-cutter “chosen one”. She’s a good girl, well-meaning and adorkably clumsy with a stable family. Her flaws only come through when she’s transformed. And yowza, are there a ton of those flaws that are overlooked. As Ladybug, Marinette is full of herself and blindly confident. She is stubborn, screams at people, and is very fond of the word “liar” when accusing people of ill-action. Whereas when Chat Noir is transformed, he is also overly confident and full of swagger. However, this behavior makes sense because as Adrien he is repressed. Chat Noir is his only chance to be himself with some sense of independence.

Need some evidence? Let’s take a look at some of Adrien’s life obstacles. He has an overbearing father who is literally the head villain of the show (Hawk Moth) and the villain in Adrien’s narrative. He constantly takes away Adrien’s freedom of self, of speech, and of socializing. He not only threatens Adrien with home schooling (which would make him lose his friends), but he makes Adrien do modeling and fencing and other activities (piano and Chinese language). There’s no give and take, it’s all power with Gabriel/aka/Hawk Moth.

When viewers first meet Adrien Agreste you might think this kid seems like he has it all together…but when you take a step back you begin to see how deeply flawed this character is. He has so many problems that he takes in stride which shows an enormous amount of strength. If he were anyone else, these issues could be paralyzing. The uncaring father and the missing mother alone could send him into a spiral of self-destruction, but he handles these things like a champ. A cute, quirky champ that the fans adore.

Plus, there’s a grip of girls in town who seem to think he’s the only piece of man-meat in town.

We’re not the only ones who see that Adrien is a sad boy, and while we would like to pretend that everything is ok with him there are some things that we can’t ignore. The thing about following a hero that is centric to the story is there are certain things I like to see. For example, since Adrien has all of this pushback surrounding him and he is repressed it would be great to see him break free of that. That kind of character development, similar to how Elsa in Frozen is locked away and then throws caution to the wind and sort of finds herself would be a great hook.

Not to mention his Mom looks just like Elsa, but we digress.

To reiterate an earlier point, it’s easy to see why creator Thomas Astruc focused more around Marinette and that was probably due to the fact that there are just not that many super hero shows where a girl is the star. That is very smart marketing on his end, and yes, that is what got us to watch the show initially. But would the show be better if what is happening to Adrien happened to Marinette. What if their situations were swapped? Would it make for a better story? Yes! So why not just focus the show around Adrien in the first place.

The mysterious absence of his mother is a real head scratcher. What happened to her? What did his father say to make him okay with her being gone? Is she only on vacation? Is she on a secret evil villain and is the real mastermind behind Hawk Moth’s evil escapades? It has been debated among fans, (mainly us writing this article), that his mother must be the puppeteer and Hawk Moth is her devotee, here to carry out her mission while she is away, which is still unclear. Or that he needs all the Miraculouses so that he can summon her because somewhere along the line something went terribly wrong. (We theorize it has something to do with that book Marinette stole with all the secret recipes in it).

Anyway, going back to Adrien. His mom is legitimately missing from his life, and he seems pretty fine with it. We don’t think she is dead and it is only briefly mentioned in the Christmas Special that this is his first year without his mom. The photo that we see next what so obviously must be the Peacock Miraculous is one of Adrien and his mother and he doesn’t look much different than he does today. So, this must all have happened recently. I know people who have lost their parents and believe me a year or less and it is still very much a fresh wound.

Does his Chat Noir suit being so similar to a bondage outfit have anything to do with how he is being presented to us? Let’s take a moment to break that one down. Bondage is the state of being a slave, and poor Adrien is a slave in so many aspects of his life. His home life for one where he has to walk on eggshells so that his dad doesn’t focus on him. He has to work, and for what? For his own spending money or to keep his family in good standing and still in the spotlight after his mother essentially disappeared? This is interesting if you think about all these things, when he is being most repressed he is just dressed normally. When he is finally able to be himself and let his “freak flag fly” he is dressed in bondage. It’s totally the opposite of what you would think but I think that this is on purpose to show that you really can never tell if a person is ok just based on how they look.

It starts off the show implying that he doesn’t have many friends, or real friends and I think he is looking for that in Ladybug because they have so much in common. But Ladybug seems to brush him off because in civilian form she is Marinette and Marinette likes Adrien. It’s kind of tragic in the sense that if they just knew about each other they could be so happy.

We don’t think this aspect of the show effects Marinette the same way it does Adrien. He seems to be relying on this much more heavily. It’s even addressed in the mermaid episode when Ladybug has to disappear yet again during the middle of the fight to go see Master Fu. Chat Noir is sick of being left out and he tells us so in this episode. It’s not until later we get some sort of resolution when Master Fu shows up at Adrien’s house to teach him Chinese that we get a sense of, “Ah, so the show knows that Adrien needs a little more than what he is being given.” This is where I first noticed the angst in him, and how every little thing has to be chipping away at him.

So, understanding all of this, let’s talk about Plagg.

We think Plagg may be the only thing that is keeping Adrien together. It seems like he has taken on the role of a tiny floaty therapist kwami for him. One that smells probably and eats a LOT of camembert. There is a lot of speculation that the kwami know who holds the other Miraculous and to which we say what the hell?! You mean Plagg knows Ladybug is Marinette and vice versa for Tikki? Can they not see that these two need to just get together and be honest with one another? How much better would Adrien feel knowing that the person he loved was someone he considered a friend? He has no one to confide in. When you feel like you can’t talk to anyone you start getting more and more depressed, and then the issue becomes that you can’t break yourself out of it.

We have a fan theory that Chloe and Adrien were really good friends once but since he acquired his kwami they have since then drifted apart. Which is nice to think that they once had that kind of connection but if you think about it, her dad is like the mayor, she is spoiled and could get any information she wanted from him. That might be some of her thinking when she continually throws herself at Adrien, who doesn’t seem too bothered by it hence fan theory, that the two of them could become a huge power couple in France together. We’re not sure if that’s the reason Adrien’s dad seems to have when he seems to encourage that relationship to happen or not but it is definitely a possibility.

The series is progressing and the tension is building. What occurrence will cause the first break? Because really, something’s gotta give here. Will Ladybug and Chat Noir learn of each other’s identities? Will Adrien learn Marinette is Ladybug and torture himself with that information, or try to date her? Or will show runners be super progressive and take new “hot rock band boy” Luca and make him do something cool? Hell, he’s been brought in to be romantic competition for a romance that has yet to happen yet. We would personally love to see Adrien and Luca but that’s just the love for “Boy’s love” showing through.

Oh sweet gods wouldn’t that be great though…