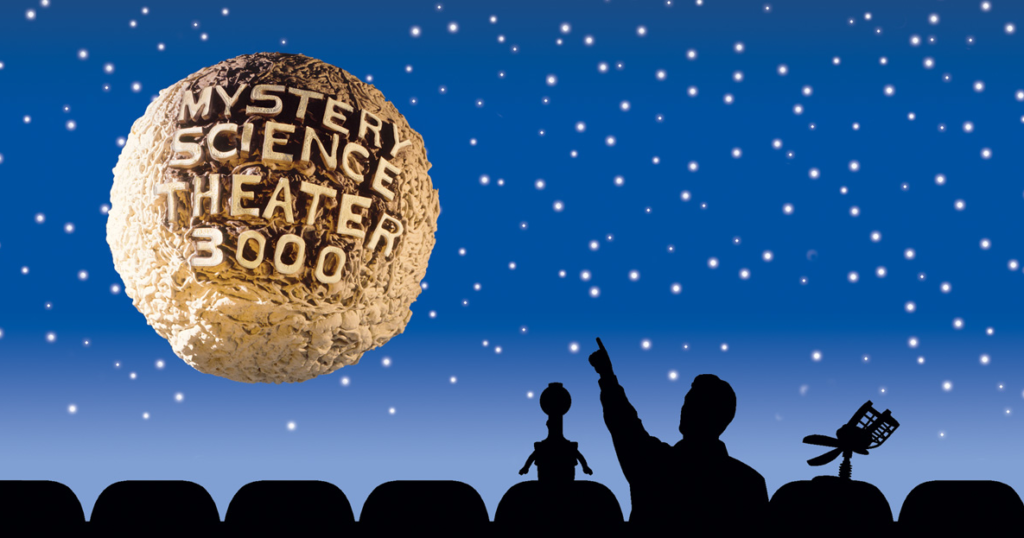 It’s that time of year again. Movie lovers are posting their top ten lists, making their Oscar predictions, and trying to sound cool because they saw that offbeat movie their favorite obscure film podcast mentioned once. In a time of such fond remembrance, it’s easy to forget the need to celebrate the terrible movies.

No human beings (or robots) celebrate bad movies as wholeheartedly as the creators, hosts, and writers of Mystery Science Theater 3000. Over the years they have seen some of the worst movies ever to be created and never gave up their quest to make fun of every last frame. What makes these movies so special, however, is their earnest attempts to be cinema classics.

In honor of award season, it’s time to take a look at the movies that actually come close. (Ok, they really don’t, but we will celebrate them nonetheless!)

*Disclaimer: I am far more knowledgeable in the post-Joel era of the show. Sorry Joel fans, I love him for creating this thing we all love but a) he had a superpower for picking the absolute cheesiest movies ever b) I gravitate to Mike’s cynicism, plain and simple.

I’m suddenly caught up wondering what this award would actually look like. A shrugging Oscar, maybe?

The Sword and the Dragon

Even in the middle of their riffing, the MST3K hosts have to admit that this movie is probably more expensive than all the others they have watched before it, combined. All that Soviet Union money had to go somewhere. Who knew that place would be expensive set design and a lot of horses I will assume lived long happy lives after this movie was filmed.

The Sword and the Dragon is the Soviet Lord of the Rings, some would say. Ok, I call it that sometimes. It features characters based on actual mythology, and according to IMDB, had 106,000 extras. Impressive no matter how goofy some of the scenes end up looking.

Remembering it was made in the 1950’s, some of the makeup and special effects are done really well for the time. The dragon doesn’t even look half bad. Again for the 50’s. This movie even shoots said dragon with a ballista way before it was cool.

On the other hand, it portrays a very Mongolian type war band in a way that only the 50’s could. Granted any country anywhere near Eastern Europe or Asia would have a tradition of not liking the people that absolutely owned them for a little bit of their history.

Then there’s the wind demon…

I Was A Teenage Werewolf

This movie is a bit of an enigma. The titular werewolf, that is also a teenager, is played by Michael Landon who went on to act in actual things. In some ways, it’s a cult classic, because how many times have you heard “I was a teenage…insert whatever you want here.” In other ways, it’s the epitome of cheesy monster movies.

What stands out is Michael Landon, honestly. He actually does a great job portraying a character who can’t control this anger rising in him. He would have made a good Anakin Skywalker, certainly better than what we got. Well, that’s not saying much, but still. And he would throw a lot of blue milk at walls. (Seriously, for whatever reason Michael Landon throws a lot of milk at walls to portray his anger.) Maybe it symbolizes something? Is he throwing his innocence away? Damn, that would be good, if I trusted the filmmakers were actually thinking that deeply.

The movie really falls apart when we get to see the werewolf. They should have utilized the, it’s scarier when you don’t see it, technique. A werewolf wearing a letterman jacket just doesn’t strike fear the way they wanted, especially when it’s not even ripped up or anything. Although, if I were a werewolf, I would appreciate it if my monster form fit into my jeans and shirt I happened to be wearing. That’s a lot of money wasted on new clothes every time the moon was out.

My favorite quirk is how the detective in the movie doesn’t know how normal people speak. I may not have lived through the 50’s, but I’m pretty sure no one actually criticized a teenager by using the term “jive talk” in real life. In fact, this is probably a filmmaking error of wanting to show reckless teenagers while forgetting that recklessness usually comes with alcohol attached.

But that homogenized 2 percent is close enough I guess.

If you want to get an agent for a book, you need to send a query letter to them in the hopes that it catches their eye. You need a compelling concept that you can be concise, yet excited about. So, if you said your story involved a group of people dying in a car crash and their souls were thrown from their bodies in the violence, only to be hunted by the angel of death, who takes them down to hell, and makes them into what they were being hunted by, then you probably have your own little table at Barnes & Noble.

Yet, Soultaker somehow takes this kick-ass concept and whizzes it right down its leg.

Once again, the concept of young folks partying is just not something that these movie writers can grasp. The main characters all go to some summer fest in the woods that ends around two in the afternoon. The driver of the doomed car gets randomly mad at his friend and goes slightly fast down an empty highway. (Michael Landon would have thrown milk and been done with it). Then, the angel of death is none other than Joe Estevez, the Sheen relative no one wanted.

They also do my favorite trope that never works. The movie keeps showing a clock, because apparently, no family members of the characters decide to wait longer than a day before pulling the plug on them in the hospital. The tension builds up to a moment, but then nothing bad happens, all while the movie insists on showing that clock over and over, long after the tension has died.

Also, the angel of death has a supervisor.

I was going to make fun of this movie for trying really hard to have an ambiguous and thought-provoking ending just like 2001: A Space Odyssey, which tonally, it seems to try and imitate. Then I realized that this movie came out in 1964, four years before 2001. Trailblazer y’all!

Could it possibly be anything like the contender for greatest movie of all time? No. Then you start to think about it, and there are some similarities. This is especially true of some of the special effect movie magic happening. In spite of a tiny budget, they pull off some neat little effects. (Not counting the matte painting background and worse than Star Trek set rock formations).

Some of the robots from the film are people in costume, disassembled and reassembled before our eyes all in one take. There’s no editing or break to hide the fact that they somehow pull these actors heads off and replace parts of these robots.

This is so cool to the filmmakers that they forget they should probably tell a story. There’s a lot of long shots that just show, oh hey look what we can do! This is too bad because the plot goes in some interesting directions, again, for a B-movie. There’s a lot of failure on our main characters parts, and it’s a fairly depressing resolution filled with a pinch of the trippy, wanting to be in a think-piece article, ending.

All delivered by actors who seem bored out of their minds.

Here it is! The most almost good movie that Mystery Science Theater ever watched. Well, according to one person’s opinion who has seen the majority of the show, but not every single episode.

Barely making out of the uncanny valley of the 1950’s, The Leech Woman started off the 60’s with, well, much of the same.

What I love about this movie, (dear God I just said that phrase about an MST3K movie), is that it comes so close to being such a statement about youth and the social construct of beauty. The main character is a very obviously in makeup middle-aged woman who is in a very 60’s unhealthy relationship. Although, it does seem to go out of its way to show that her almost ex-husband is absolutely terrible to her.

She wants to regain her youth to recapture her beauty. Unfortunately, the movie could have gone deeper with it and missed its opportunity to get all psychological on you. Of course, this is an MST3K movie, so there’s that.

Instead of diving into what could be a really fascinating woman, the movie promptly forgets that she has a tragic past and we get to see her start slaughtering men by the dozens to keep her youth. (Cuz magic). The movie ends with her being gunned down after trying to hide her kind of goofy murderous deeds.

And the end, I guess.

It almost felt like the movie really wanted to be a critical dive into cultural norms, then the writers wrote themselves into a corner filled with magic and ancient tribal rituals. Someone from the back of the room shouted “escalate it!” and our main character then went on her rampage.

“Should we edit this Steve?”

That could be a behind the scenes quote from any of these movies.

So remember, as you make your top ten lists, hold a special place in your hearts for all the adorable, terrifying, and downright earnest attempts to make good movies that went way off course.

Oh and be sure to celebrate the celebrators because we will be getting a season 2 of Mystery Science Theater 3000: The Return on Netflix!

How many MSTies do we have in our readership? What’s your favorite episode of Mystery Science Theater 3000? Let us know in the comments below!