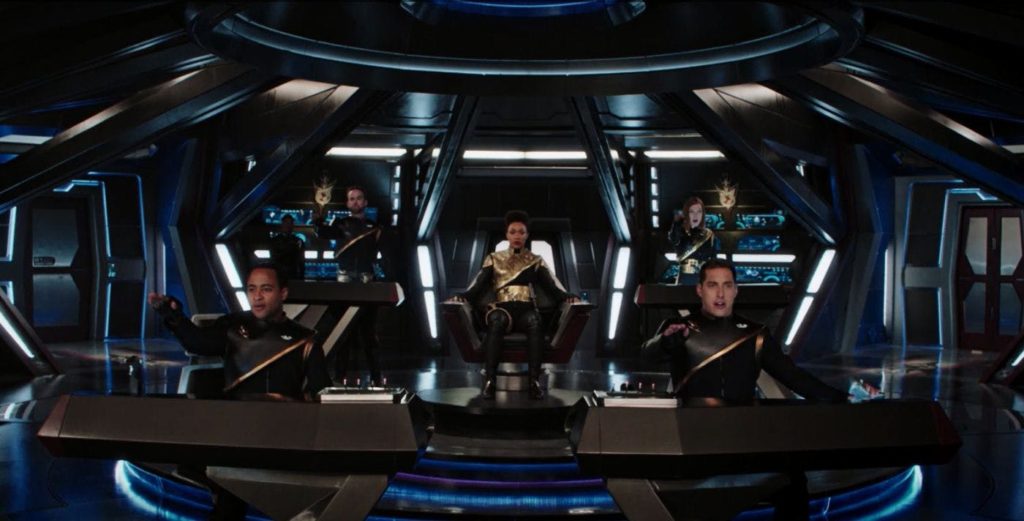 CBS All Access’ Star Trek: Discovery has pushed an entire storyline – three episodes, plus at least part of next week’s fourth – into the franchises Mirror Universe, a place usually kept to single or double episode stretches. In this universe, Spock has an infamous goatee, the Federation is unheard of, and the operations of ships like the ISS Enterprise (or ISS Discovery here), are run by totalitarian rule of an emperor. Screw something up, and they’ll beam you into outer space. Though, when I saw that on the January 14th Discovery episode, The Wolf Inside, I was hoping they were just going to energize the transporter, then leave the molecules disassembled. Maybe I deserve a spot as an evil captain.

For fifty years (the first episode in The Original Series’ “Mirror, Mirror“ aired in 1967), the Mirror Universe has certainly allowed Star Trek writers to explore interesting sides of their usually political and military duty-bound characters. That, or it is an excuse to go to 11 on the sci-fi sexy scale. Probably both. But if you look at Star Trek as the best of humanity, as creator Gene Roddenberry certainly envisioned, the Mirror Universe lets us explore the worst of it. It is this polar opposite of what we expect from our favorite characters that is so jarring.

It’s possible the idea itself could derive from real life military settings. The fact is that any one of us can be turned into our Mirror Universe’s self.

War is a Mirror Universe of Real Life

War is complicated. It is ugly. And it is a place where the light of good, blends in with the terrible darkness of bad. War is a play built around characters of extremes of complete righteousness and pure evil. Each polar opposite pulls all of the actors into the middle and it happens for any number of reasons.

The Worst of Ourselves

Take the example of Abu Ghraib. I have to doubt that any soldier would have walked in there with the assumption of committing any of the crimes they ended up doing. Personally, I have worked alongside the likes of Military Police and Intelligence. Many that I served with were, like myself, trained in the aftermath and lessons of the abuses that came to light in 2004. But, the sense of duty for country that has driven young men and women to join the military for almost 250 years was still the main driving force behind their ‘signing the blank check.’

The vast, vast, vast majority of those looking to join the military are doing it for a main reason of anything but looking to kill. College tuition, escape from previous surroundings, learning new skills, serving their country, upholding a family tradition… sure. But “kill, kill, kill?” Not so much.

So, if they came in looking to do good, but they still ended up committing these crimes in Abu Ghraib, how did they get there? It wasn’t a transporter accident, and it wasn’t a Captain messing with Spore Drive coordinates. An audience gets to recognize how vile the Mirror Universe is because of how immediate in contrast it is to our usual heroes. Real life is slow and methodical. You don’t notice that you put on 10 pounds over a year, and you don’t notice that your morals and ethics broke down until you see a photo of yourself giving a thumbs-up over a naked detainee on CBS News.

We are an Audience to War

For the observer, we are put in a place to watch a Mirror Universe’s empire or the news of torture. We see it in an instant, and we can make our judgments clearly and with certainty. Yet, as many have said before, that war is a fog; of decisions, actions, and ethics. Morals shift based on what we’ve seen and what we’ve done.

The path of this change gets played out a bit by Discovery’s Michael Burnham, played by Sonequa Martin-Green.

“Every moment is a test. Can you bury your heart? Can you hide your decency? Can you continue to pretend to be one of them, even as little by little, it kills the person you really are?… I’ve continued to study their ways, read all that I can. It’s gotten easier to pass [as one of them].”

At the time, she had only spent two days in her fictional Mirror Universe. Changed by the drastic actions she needs to take to try and get back to her home dimension.

One walks into war, with every moral and ethical compass pointing true North. It is near impossible to keep it there. You may not go bad, but you certainly feel at least ‘less good.’ You’ve seen the worst of life’s offerings, and it can’t help but change you. What you hope you do is not change so slowly, so certainly, towards ‘bad’ that you never see it until you end up on the news.

It is at that moment, you begin to realize you have flipped universes – and much like Discovery’s crew – getting home is much harder.

How do you like the Star Trek Mirror Universe? Let us know below in our comments section.