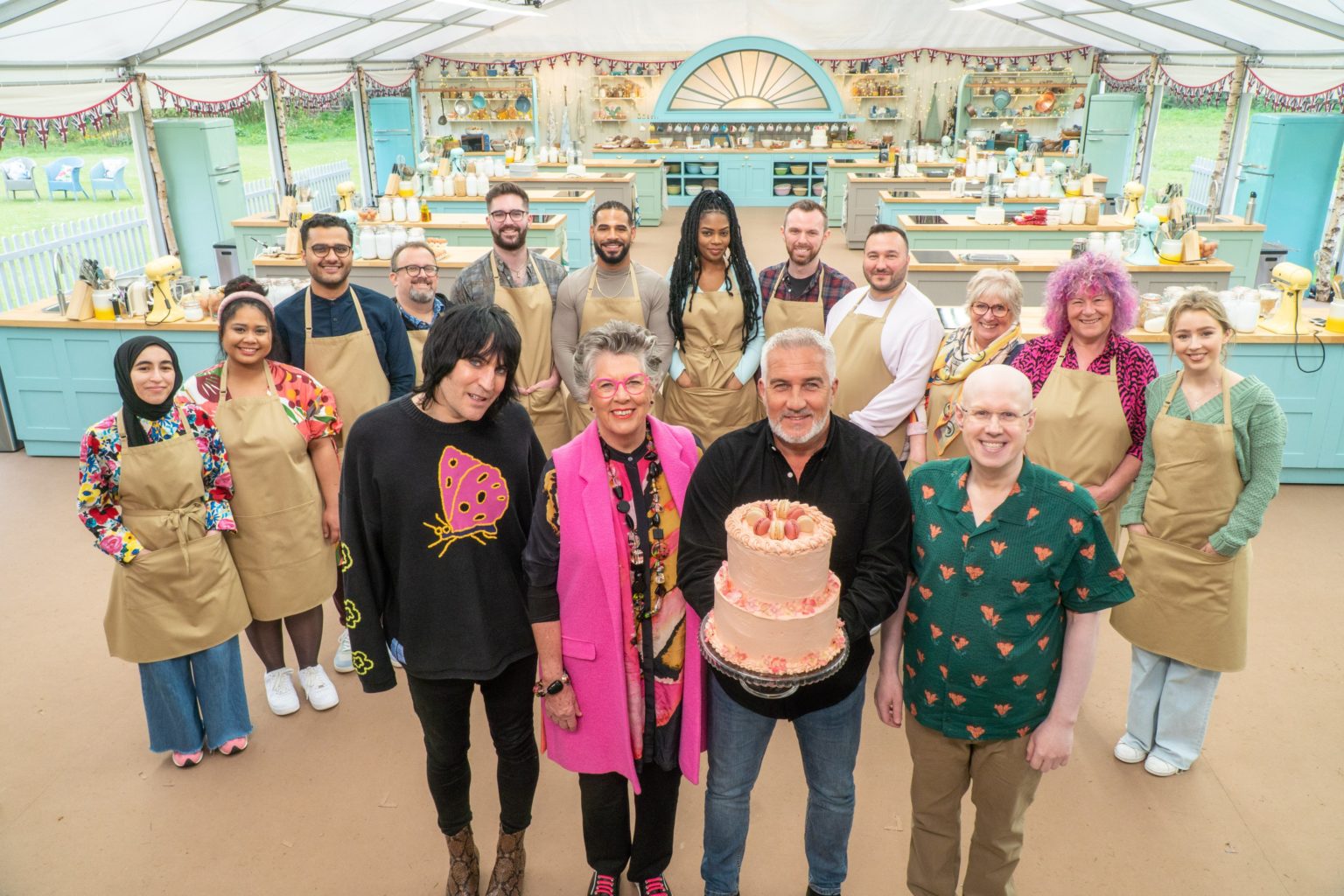 One of the great feel good series ever is returning this month, and it couldn’t come at a better time. While it’s not the original set of hosts, we’re very excited “The Great British Baking Show” is coming. The cast of bakers making their way to the big tent for collection 10 (technically series 13) has also been revealed.

Raised in Saudi Arabia to Pakistani parents, Abdul is the middle of three children — and the one who got into trouble for pulling apart the electronic devices around the house. All’s well that ends well, though, since Abdul is now an electronics engineer, dividing his time between London and Cambridge. A keen salsa dancer and a self-confessed space nerd, his interest in baking began when he and his graduate colleagues baked for each other to brighten up their daily coffee breaks. He applies his precision thinking to the chemistry of creating bakes. Matcha is among his favorite flavors.

Born and bred in the West Country, Carole lives on a Dorset hillside with her husband, Michael. Her segment on a local radio show is called “Compost Carole,” during which she shares her gardening know-how with listeners. Carole brings the artistry that she uses in her garden to her baking, creating colorful and eclectic bakes that are inspired by her passion for horticulture. She began her dedicated baking journey with a first birthday cake for her eldest granddaughter, Maisie. Since then, she has refined her skills, using YouTube to teach herself the finer techniques of decoration. Her favorite flavors are fruity and punchy.

The eldest of three children, Dawn lives with her partner, Trevor (the self-styled person who tidies up the kitchen after her!). She is a mother to three, stepmother to two and grandmother/step-grandmother to four. Describing herself as an artist in and out of the kitchen, Dawn loves the challenge of an illusion cake (the more impossible-sounding, the better), favoring whacky and intricate designs that allow her to express her creative talent. She prides herself on her steady hand and attention to detail, especially when it comes to the intricacy required for lace patterns on biscuits. Her favorite flavors are lemon, salted caramel and anything nutty.

Proud kilt-wearer James grew up in the east end of Glasgow and moved to England after university. He is a self-proclaimed board game geek and loves horror films from the ’70s and ’80s. As an avid music fan, his passion is reflected in his baking style, which is now significantly better than it was during his childhood when he was burning pancakes in his mother’s kitchen. James enjoys the technical side of baking, but he’s in his element when  baking on his own, with his signature “child-friendly horror” style and adorable decorations. His favorite flavors are anything autumnal, such as mixed spice, apples and caramel.

Janusz grew up in Poland and moved to the UK 10 years ago. He is now living on the southeast coast with his boyfriend, Simon, and their sausage dog, Nigel. Apart from baking, Janusz’s passions include internet culture, watching drag (he even bought his boyfriend a statue of Ru Paul) and collecting movie props. He was inspired to bake by his mother, who always baked on a Saturday, a tradition Janusz continued when he moved away to attend university. He describes his baking style as “cartoon-like, colorful and camp” and loves working Polish ingredients into British staples. His favorite flavors are ginger and chocolate.

Surrounded by family and much-loved animals, Kevin is devoted to his nearest and dearest. He spends as much time as possible with his wife, Rachel, and his sisters and their partners, laughing, eating and playing board games. A talented musician, who not only teaches but also performs, Kevin is principally a saxophonist but is accomplished at the flute, the piano and the clarinet too. He began baking when he was 17. Kevin’s ethos in the kitchen is to use the best, seasonal ingredients and to spend time refining technique — with these habits in hand, he believes the presentation will take care of itself. Kevin loves interesting combinations of fruits, herbs, nuts and spices.

Originally from Libya, Maisam has lived in the UK since she was 9. She speaks five languages (English, Arabic, Amazigh, Spanish and Turkish) and aims to make that seven by the time she turns 20. Maisam has a strong creative streak, spending her spare time photographing still lifes and the world around her. She has been baking since she was about 13 and loves the science required to get a bake right — often trying something multiple times until it is perfect. Her favorite flavors are inspired by her Mediterranean heritage — she loves the tang of olives, the sweetness of dates and the nuttiness of sesame seeds.

Swedish-born Maxy studied fine art and went on to achieve a master’s degree in architecture, pausing her final qualifications to raise her two daughters, Tyra and Talia. She has DIY-ed every corner of her flat — from laying the flooring and resurfacing the balcony to painting the walls and hanging her own artwork. She began baking five years ago, with the arrival of her first daughter. Maxy uses her strong artistic skills to create beautifully decorated celebration cakes. Her favorite flavors link to her Scandinavian upbringing — the sweet and delicate spice of cardamom along with saffron buns and cinnamon rolls.

Rebs spent her childhood in the countryside in Northern Ireland and loves everything to do with Irish culture — she can Irish dance and play the tin whistle. Her earliest baking memory is of being 3 years old and helping her mom in the kitchen, and of eating her granny’s renowned lemon meringue pies. More recently, she returned to baking as a way to unwind from the stress of a busy life in the tech world. Flavor is paramount for her, and she has more recently started to play around with Middle Eastern ingredients in a nod to her boyfriend, Jack’s Turkish family heritage.

Sandro was born in Angola but fled the Angolan war with his mom when he was 2, settling then in London. Passionate about fitness, Sandro is a keen boxer and has a background in ballet and breakdance too. When Sandro was 21, his father passed away and he turned to baking as a form of therapy. Now he lives and breathes it, and he is often found rustling up bakes in a relaxed vibe with the TV on or running virtual baking classes for children with autism. He likes to infuse his bakes with flavors from his Angolan heritage — the spice of paprika paired with tangy cheese and sweet bakes smothered in sticky dulce de leche.

Malaysian-born Syabira is one of seven children. She moved to the UK in 2013 to study for her Ph.D. and is now happily settled in London with her boyfriend, Bradley. She loves gaming and often spends evenings playing an online World War II simulation game, which she credits with teaching her about leadership in the real world. Syabira started baking relatively recently — in 2017 — with a red velvet cake, which reminded her of the treats she shared with her friends back home. She is all for giving Malaysian flavor twists to British classics: chicken rendang cornish pasties are a particular favorite.

One of three children, Will grew up just outside Bristol before leaving for university in Liverpool. Now he lives in London with his wife, three children and a cat called Tiggy. When he’s not hanging out with his kids, Will loves DIY and carpentry, which indulges his background in architecture, and cooking up new and exciting dishes in the kitchen. His passion for baking began when he was 2, when his mom would give him her pastry trimmings to turn into little jam tarts. Intrigued by the technical side of baking, Will is a particular fan of using yeast — and not just in bread! His favorite flavors are salted caramel and paprika (but not at the same time).