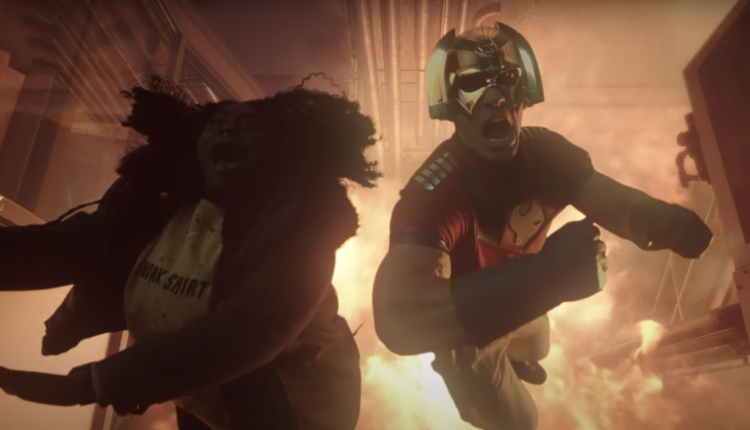 “Peacemaker” is a Violent, Laugh Out Loud Superhero Spin-off [Review]

The new year is kicking off big with television releases dominating the streaming space. We started the year with a fantastic 4th season of “Cobra Kai,” only to be followed by the much anticipated “Peacemaker” a few weeks later. A spinoff of James Gunn‘s “The Suicide Squad,” the series follows film standout Peacemaker (John Cena) in a whole new adventure independent of the crew in the film, but still deeply connected to its events.

I’ll be the first to admit that even thought I had a blast with the film, I was skeptical about the success of a spinoff. Not that Cena’s Peacemaker seemed incapable of carrying a show, just that it wasn’t really something I was clamoring for after the film’s credit rolled. The trailer looked promising, but we all know that trailers lie so I was still apprehensive to embark on this seemingly unnecessary continuation. Luckily, this show delivers on just about everything you could ever want from a Gunn spinoff. Funny, Violent, Irreverent, and wholly self aware, “Peacemaker” kicks down the door of superhero shows with a gun and tidy whities.

Written and directed by series creator and auteur filmmaker James Gunn, the spinoff series follows a delusional hero as he gets roped into yet another one of Amanda Waller’s (Viola Davis) schemes. After surviving the finale of the film (in which he was shot and a building fell on him), he is released from the hospital only to be tracked down by some familiar faces from the original Waller crew. The new ragtag group of people in the chair are led by the mysterious Clemson Murn (Chukwudi Iwuji) who enlists Peacemaker’s help with Project Butterfly. Conflicted about his purpose and how he goes about his hero antics, Peacemaker must figure out what kind of hero he wants to be while also solving the mystery of Project Butterfly.

Before we even begin to unpack the brilliance and hilarity that ensues in the show, we have to establish that this is a James Gunn project through and through. Whatever that means to you will unequivocally determine how you feel about the show overall. You’re either on board with Gunn’s irreverent style of blood and comedy or you’re completely turned off by it.

“Peacemaker” is unrelenting and resolute in its creative choices, and will never ask for forgiveness or permission for anything it does. This is a compliment to the show overall, as I for one have always been on board for Gunn’s style. I particularly enjoy his work when it is framed with a sort of Gunn unleashed approached (like his many years at Troma), and “Peacemaker” absolutely barrels forward without restraint. From the very start of the first episode in which Cena asks the doctor to increase the muscle definition in his x-ray photo to show the work he’s done on his smaller muscle groups (yes, seriously), to the musical song and dance number that serves as the series introduction, you are immediately told to (for lack of a better phrase) strap the fuck in for a one wild ride.

Cena has now wholly embraced his role as a comedic actor, something he’s been slowly working at over the last few years. He shines here, with Gunn allowing Cena to cut loose and put his comedic chops on full display. This is a showcase for Cena, and the pairing of him and Gunn makes the comedy in “Peacemaker” laugh out loud hilarious. I can’t stress enough how free, willing and able Cena is here. Hell, he spends a majority of the first episode running around in tidy whities and getting hugged by his pet eagle. What makes this so successful in addition to Cena’s comedic timing is also this tag team of actor and filmmaker to inject a surprising amount of heart beneath the surface of dick jokes and flying guts. Gunn has always had a knack for finding humanity in the most unlikely of places, and that balance of gross out humor juxtaposed against relatable human stories is one of the reasons he works best when he’s unencumbered.

Everyone is great as well, complimenting Cena as he chews through scenery. It’s hard to compliment any one cast member outside of Cena because everyone is really giving their all. Gunn additionally seems dialed into the strengths of his cast, and let’s them run with their “Peacemaker” characters as much as anyone else. This makes every interaction feel important and funny, with no one feeling like a wasted addition or out of place. Everyone both in front of and behind the camera are acutely aware of what kind of show they’re making, and every single person seems to be having an absolute blast. The most surprisingly enjoyable character is Vigilante, played by Freddie Stroma. Don’t worry if the name doesn’t sound familiar. Stroma is most known for his role in the “Harry Potter” franchise as well as a bit part in “Pitch Perfect” where he shows off his impressive six pack. Stroma is surprising because nothing in his resume would suggest he’s a perfect comedic sidekick for someone like Cena’s Peacemaker. Stroma is a perfect fanboy hero who idolizes Peacemaker and not always for the right reasons. Their hero sidekick dynamic is hilarious, and Stroma displays whole other facet to his acting resume that is more than welcomed.

“Peacemaker” is the perfect start to a somewhat downer beginning of a year. It is packed with heart and humor and violence, and doubles down on anything and everything that made the film so much fun. It’s certainly not for everyone, and I can’t stress enough how much Gunn goes for it here. So if you’re put off by cringe comments from characters clearly out of touch with reality, over the top violence, and an assaulting number of sex jokes (of every kind by the way), then this show is definitely not your speed. If you’re into all of that, then you’re in for a treat. It almost feels like a reward for survival, delivering the kind of indulgent fun we desperately need in these trying times. It’s once again refreshing to watch a superhero show that isn’t so self indulgent and weighty, the implications of which are contained to the story and character instead of having something big and grand and cosmic to say. I felt the same way with “Hawkeye,” which in tone is kind of the family friendly-version of “Peacemaker.”

That comparison shouldn’t be taken at face value and I need to clarify: they are NOT the same. But they are in the sense that neither show (mostly as “Hawkeye” takes a bit of turn towards the connective tissue of its larger picture toward the end) is trying to be anything other than a fun, superhero romp through their respective cities. We certainly need the weighty, heavy handed aspects of the genre, but “Peacemaker” is wholly refreshing by its departure from self importance. The first three episodes are comfortable with just existing to be fun and funny, with a story worth investing in if you’re willing to board the train of insanity, violence and blue humor.

Case in point: “Peacemaker” is just damn good superhero fun, powered by a terrific cast and purposeful filmmaker all of whom are free to do as they please. That pleasure translates to a pleasurable viewing experience, one that will have you laughing hard while also investing in the overall narrative. “Peacemaker” is exactly what we need right now, and kind of makes you feel like everything will be ok in the end. It is escapist television at its finest, and in such a tumultuous time I can’t think of a higher compliment to give the show.

You win, Mr. Gunn. Give me more Cena in tidy whities.

The first three episodes of “Peacemaker” is now streaming on HBO Max.