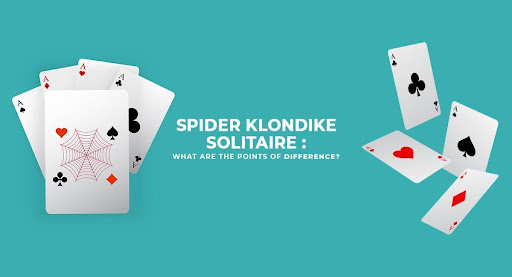 Spider & Klondike Solitaire: What Are The Points Of Difference?

The card game Solitaire is a classic game enjoyed by millions of people across the seven continents. Initially, the game was introduced as part of the Microsoft 3.0 version to get people acquainted with using the keyboard and mouse of a computer. From there, the game’s popularity spread like wildfire, and it is enjoyed even today.

However, the classic game has gone through a few variations over the years. Solitaire is a game of patience where you can invest endless hours in creating relevant sequences and transferring them to the foundation pile. Nobody has excess time these days to endlessly spend playing a game. Therefore, Klondike and Spider Solitaire rose to fame by offering fast-paced, intense action. At its core, the game’s concept remains the same with slight twists, which you’ll explore below. So, go through the differences, and then you can decide whether to download now Spider Solitaire or Klondike Solitaire.

You are not alone if you cannot distinguish between Klondike, Spider, and the other types of Solitaire card games. But there are also a few similarities that you need to know first before knowing the differences.

Klondike and Spider Solitaire have the standard elements of the classic Solitaire card game, including a tableau, a waste or discard pile, a stockpile, and a foundation pile for each suit. Well, that’s where the similarities end. While Klondike is a popular Solitaire variation in the UK, Spider is well-known across the globe for its unusual rules.

Differences between Klondike and Spider Solitaire

Klondike Solitaire is played with a single deck of fifty-two cards and seven tableaus. Each tableau has one card in the 1st column, two in the 2nd, three in the 3rd, etc. On the other hand, Spider Solitaire is played with two standard deck cards, consisting of one hundred and four cards. Fifty-four cards are divided into ten tableaus where the first four tableaus have six cards each. The tableaus that are remaining have five cards each. In both the Solitaire variants, the top cards are the only ones facing up in each tableau.

Further variations of Spider Solitaire are played with one standard card deck, and twenty-seven cards are dealt in the tableaus. The game is timed for three minutes, and players need to score as much as possible before the timer runs out.

All four suits are used in Klondike Solitaire, making the game challenging and not preferred by beginners. In comparison, Spider Solitaire has different difficulty levels. For instance, the beginner level is played with fifty-two cards and one suit. The intermediate and expert level is for skilled players and wants to play with more than one suit.

Klondike Solitaire is won by building four stacks of cards sequentially as per suits, and you need to start with an Ace card and end with a King card.

In Spider Solitaire, players must pile thirteen cards of the same suit in descending order. When all the cards are arranged on the tableau, the tableau can be transferred to the discard pile.

The stockpile is one of the essential elements in the game of Solitaire. While in Klondike, players can get only one card at a time when they tap the stockpile, Spider Solitaire players can tap the stockpile and draw five cards at once. However, this can break the sequence you’ve set, and if you draw more than four times on the stock, you may lose points.

Even though the rules and style of playing are different, both Spider and Klondike solitaire require many skills. You cannot win the game based on luck because these two games fall under the category of skill-based games. It isn’t easy to form relevant sequences, especially if there’s a timer that you have to pay attention to. Besides, there’s an opponent to beat, which may create additional pressure to perform.

However, both these variations offer you unlimited entertainment, and some Spider Solitaire games enable you to partake in tournaments and win big cash prizes. Ensure to play practice games to learn the rules and sharpen your skills before participating in cash-making contests. Besides, make sure there are no limitations regarding such tournaments in your US state.

No matter which Solitaire variation you choose, be assured of having the time of your life. The game will keep you hooked for hours, and time will fly by. Both these games are great ways to unwind and de-stress after you’ve had a tough day.

Don’t wait any longer to unleash the edge-of-the-seat fun. Download the game and install it on your device. Then you need to sign up and create an account to enter the world of Solitaire. Get gaming!

Reports Indicate Bob Iger May Return as Disney CEO in 2022

How to Write a Business Administration Thesis