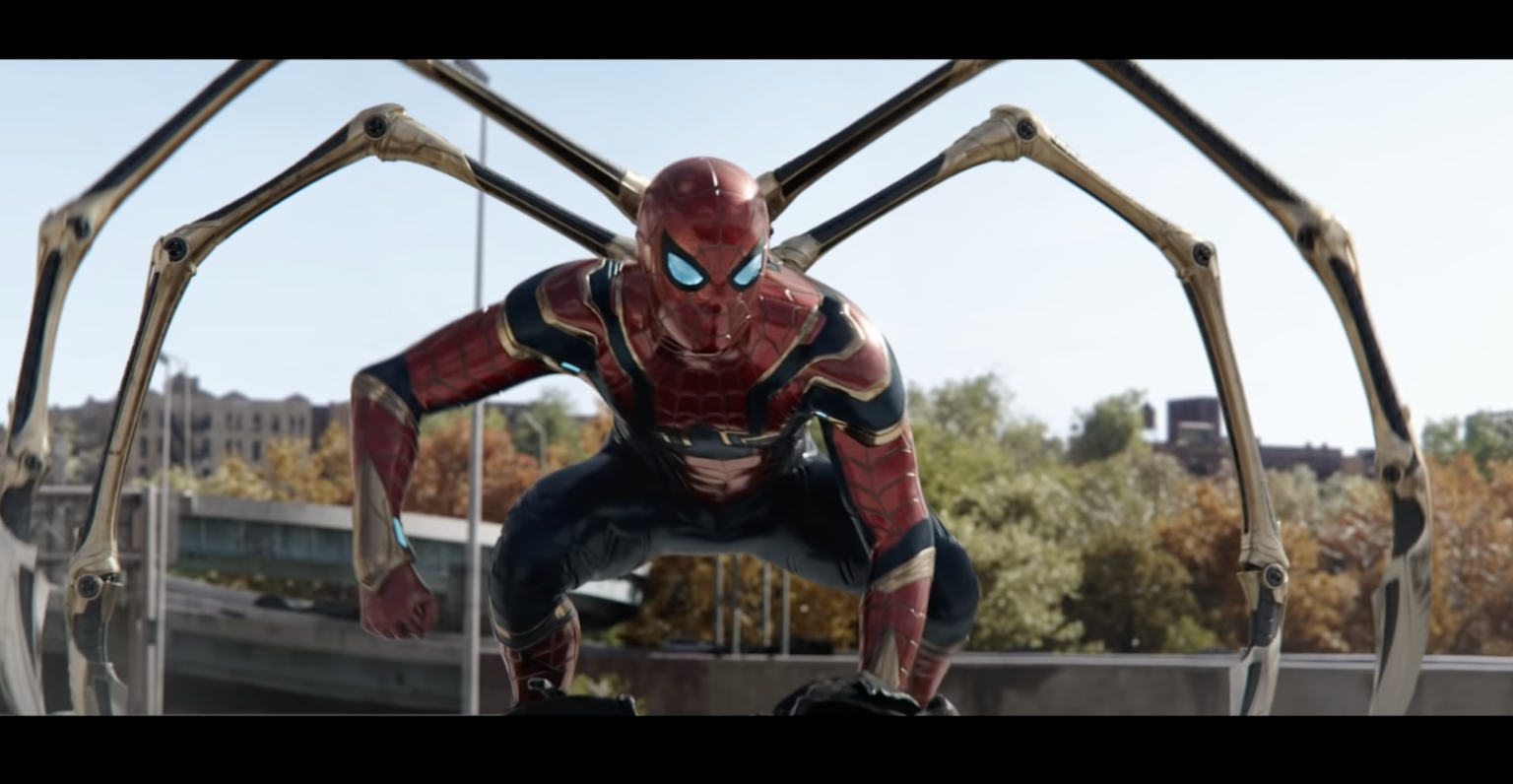 There have been very few films I’ve seen this year that have caused me to fight the urge to give it a perfect 5 out of 5 stars. “Spider-Man: No Way Home” makes a strong case for the highest rated movie to date, only losing marks for principle rather than anything wrong with the film. Yes, it’s THAT damn good. You can rest easy and put any worries aside that the film wouldn’t be able to live up to its hype or ambitious. Against all odds, “No Way Home” manages exceed them, packing the film with heart and humor and emotion that is sure to thrill audiences in ways we probably haven’t experienced since before the pandemic. This is the first film I’ve seen in a packed theater where people cheer and gasp and applaud at pivotal moments all throughout, and cements “No Way Home” as a film that embodies everything about why we love movies. You will laugh. You will cheer. You will cry. But no matter what, this will spark a fire of love for cinema we may have long forgotten, and we are all the better for this triumph.

Directed by returning franchise director John Watts and writing partners Chris Mckenna and Erik Sommers, “No Way Home” picks up pretty exactly were “Far From Home” left off. Peter Parker (Tom Holland) is exposed as Spider-Man, and in effort to return things to the way they were and help his friends not suffer the consequences of association, he seeks cosmic help from his old friend Dr. Strange (Benedict Cumberbatch). Of course, things don’t go as planned and before they know it, they have inadvertently opened the multiverse that is now pulling villains from other worlds into theirs. Both Strange and Spider-Man have differing opinions about how to go about solving this problem, which in turn creates more problems and teaches Peter that you have to be careful what you wish for.

It’s really hard to summarize the plot of “No Way Home” without diving into spoilers, so that’s the brass tacts you can gather from the trailers and I’ll leave it at that. I will say that for my part, I actually wish we never got a trailer, period. There is so much fan service, easter eggs and appearances from multiple worlds that I feel the film works best when you know as little as possible. There is so much joy to behold for fans of the Spider-Man, and I can’t help but think how rewarding it would be to see Doc Ock show up for the first time in the film itself. instead, the trailer lets us expect his entrance, and while the trailers do a decent job in disguising the context of events, it’s not hard to pin point exactly when a certain character is going to show up. The film relies on speculative expectations, and while there’s still plenty to be unveiled, I maintain that it would be more impactful to head into the dark theater completely blind.

The good news is, the trailers don’t spoil anything outside of the villains from varying franchises reprising their roles. We are treated to the return of Doc Oc (Alfred Molina), Electro (Jamie Foxx), Green Goblin (Willem Dafoe), Sandman (Thomas Hayden Church) and Lizard (Rhys Ifans). I’m sure we’ve all speculated as to who else makes an appearance in the film, and I simply can’t stress this enough: stay off the interwebs before you see “No Way Home.”

Sure, we’ve spent months speculating and theorizing about who or what else will show up in the film, but pretty much every single outlet has more or less confirmed the hidden casting list and cameo appearances. This is a horrible disservice to those who won’t have a chance to check out the film as soon as possible. There is something magical about the element of surprise here, and I really implore you to avoid spoilers at all costs.

What really sets “No Way Home” as a standout movie going experience is two fold: how well it handles its sprawling ambition and how emotionally charged it is. The film is packed with a rollercoaster of emotions, and all of the them land through brilliant performances and keen directorial talents. The balance of heart and humor is unlike anything in the MCU, which has often felt like a push and pull experience with one exacerbating the other. That’s not to say the franchise hasn’t been able to infuse their films with both, but I can’t help but think of where it doesn’t work best i.e. “Thor: Ragnorok.” There is no undercutting emotional and dramatic moments with unnecessary quips. Everything gets the opportunity to breath, and as big and ambitious as “No Way Home” is, it never crumbles under its own weight. The drama feels real. The humor feels timely. The narrative unfolds with purpose. And the fan service never feels like pandering.

I know some have felt that it is, but “No Way Home” is not “Ghostbusters: Afterlife.” Every single easter egg and fan service inclusion justifies its reason for being here, and it never feels tiresome or cheap. Watts really understands how to put a massive story together in a way that makes sense, and the film really demonstrates that you can actually have a film that has a lot of villains and still work. You just have to be focused and determined as to why you’ve included them in the first place, which everyone does here. No one feels out of place or unnecessary, and everything just fits, like it was always suppose to be this way. The intentional inclusion of mentioned and unmentioned characters never draws out the eye rolls and disinterest. It all just works, which is simply incredible when you consider the massive undertaking a film like this is by nature.

I could go on and on about how terrific this film is. So I’ll just highlight these last two points: the immense emotional rollercoaster the film takes you on and where the film falls in the Spider-Man universe. First of all, bring tissues.

“No Way Home” packs an emotional punch not seen since “Avengers: Endgame.” Draw whatever conclusions you want from that, but the film test the metal of all its actors and each of them rise to occasion in spectacular fashion. For example, I’ve been high on Zendaya for a while, as she has proven that is a versatile performer capable of a great many things. But here she is lovable and heartbreaking, delivering an elevated performance that matches everyone else. Case in point: everyone is firing on all cylinders here and there isn’t a single weak performance. As fun and as joyous and as awe inspiring as the film is, it is also gut wrenching and seemingly hellbent on ripping your heart out and shattering it into a million little pieces. Everyone is that damn good, and “No Way Home” sports some of the strongest performances all around that I’ve ever seen in a Spider-Man film.

Stop making me cry, Tom Holland. We get it, you can act your ass off.

And that’s the second part of this last rave: “Spider-Man: No Way Home” is the most Spider-Man a Spider-Man has ever felt, particularly in the MCU. It feels like the first film that gets to tell its own story, no longer tethered by its necessity to introduce the character to the franchise and no longer operating under the looming shadow of Tony Stark. “No Way Home” gets to exist as a wholly independent Spider-Man journey, with everything being about the wall crawler and his own world rather than how he exists in the world of other people. It’s not only the Spider-Man film we wanted, but the one we needed, to cement the character as a solo franchise leader. We’ve always known that the web slinger is a franchise box office smasher, but “No Way Home” really lets the character breath and exist on his own. The story is a Spider-Man story first, an everything else story second, and that is really refreshing and only seeks to make the film better than we ever could have imagined.

Just get up and go to theater right now to watch “Spider-Man: No Way Home.” Don’t look it up on IMDB, don’t google the casting, don’t read any reviews. Just turn your computer or phone off and get yourself a ticket to the theater. It has been long time since I’ve gotten to cheer along with a packed theater audience, and it was wonderful to experience such an amazing film with other likeminded nerds and fans. The less you know the better, and I implore you to avoid as much as you possible can heading into it. Do whatever it takes to avoid getting things spoiled for you, because the film deserves to be experienced as a blank slate.

“Spider-Man: No Way Home” is why we love movies, and just may be one of the best movie going experiences of the year. And it may just been one of the best films in the MCU.

I said what I said. Now stop reading, and get your ass to the theater before someone without a soul lists the entire cast, cameos and all. I’m looking at you, Google.