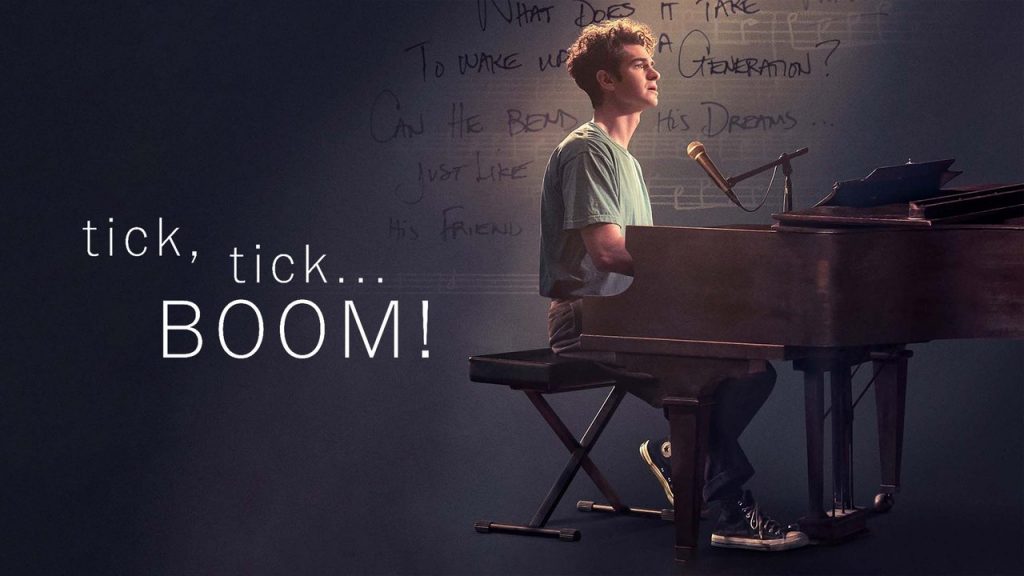 The best way I can describe “Tick Tick…Boom!” is that it’s essentially the “Ready Player One” of adapted musicals. It is loaded from top to bottom broadway easter eggs and references, like trying to find Mephisto in the MCU, but in song and dance numbers. This is a celebration of art, creation, and broadway itself, made for musical theater nerds, about musical theater nerds, and by musical theater nerds. It is the ultimate meta musical film, with so many layers it’s hard to even begin to peel them back. These are all compliments, by the way.

“Tick Tick…Boom!” is absolutely wonderful and joyous, packed with nods and cameos certain to elate any musical theater fan and telling a wonderful, heartfelt story that is both true and untrue for both a reliable and unreliable narrator. The film knows as much, starting off with a title card stating “Everything you’re about to see is true, except for the parts that Jonathan made up…” It is a triumphant, beautiful film, powered by dazzling performances from its lead and true passion and knowledge from its creators. It ranks as one of the most feel good films of the year so far for me.

Written by Steven Levenson (author of “Dear Evan Hansen”) and directed by Lin-Manuel Miranda (“Hamilton” obviously), “Tick Tick…Boom” is a film adaption of Jonathan Larson’s one man show of the same name, and marks Miranda’s directorial debut. A semi autobiographical musical, it tells the story of a young up and coming musical theater writer who wrestles with whether or not he’s made the right choice pursuing art as his 30th birthday looms. The film blends recreated scenes from the actual, stripped down musical with reenactments of character in the musical itself, which is also told through the music of the musical. If that sounds complicated, it’s really not. It’s just layer with a meta mindset by design, and seeks to capture the immense talent of its lead, his own story told through his own words, the love of broadway and music and lastly, the struggles and successes of artists.

I can’t stress enough how personal this film was for me. Not just because I’m a huge fan of Larson-“Rent” has long been one of my all time favorite musicals that has long since inspired me creatively for years. But because “Tick Tick…Boom” speaks to anyone who has ever tried their hand at creating. That goes for anything, not just musical theater.

This is one of the layers that may be inaccessible to some, but to those who consider themselves artists or creators in any capacity will be rewarded with a treasure trove of commentary and shared experiences. Anyone who’s ever created or is creating anything at all needs to see this film. Miranda understands this better than anyone, as he’s continuously expressed how much “Rent” changed him and influence his work on his smash hits “In the Heights” and “Hamilton.”

There is a true reverence for Larson all throughout this film, and both Levenson and Miranda do right by him and the entire world of broadway. “Tick Tick…Boom!” is what happens when you have creators with deep personal connections to the source material, and can tap into and express the nuances that others (even talented filmmakers) would miss. The film is all the better for it, and halfway through you start to realize that you are experiencing something truly special.

And then there’s Andrew Garfield as Larson, who by god chews through scenery with every single frame. Garfield accesses a depth to portray a tortured but optimistic, insanely talented artist in a way I don’t think even his most diehard supporters knew he was capable of. He is simply dazzling here, shouldering an insane amount of screen time with masterful delivery. All of the performances in the film are terrific, but it’s Garfield who’s doing the majority of the heavy lifting.

There truly needs to be award buzz for this, because Garfields performance is hands down one of the best I’ve seen all year. There is something special happening here, and the combination of passionate filmmakers driving an incredible young actor help him deliver a performance of a lifetime. Forget everything you know or remember about Andrew Garfield. His portrayal of Larson is a statement performance, and an announcement that he’s here to stay and play with the big boys.

Truth be told, this is a really hard film to review. Not because it’s an overly complicated plot or that I have conflicting opinions about how I felt about it. It’s hard to review because I don’t know how to properly express how deeply the film resonated with me. “Tick Tick…Boom!” is truly wonderful, and can be enjoyed by anyone regardless of whether or not musicals are your thing or if you know nothing about Jonathan Larson. I mean, you certainly won’t get the ultimate broadway meta tribute in “Sunday,” a song and dance number in a diner in which Miranda packs so many iconic cameos and musical theater nods, it’s almost an overload of joy for theater fans.

Seriously, the whole song I was like that Leonardo Dicaprio in “Once Upon A Time in Hollywood” meme, pointing at my TV every five seconds throughout the whole number. See, if you ARE a fan of musical theater and know about Larson and his work, then the entire film just hits different. And if you’re an artist of any capacity, everything in this film will speak to you in ways you didn’t know were possible.

And that’s hard to convey with words. So much of what happens and how I felt watching it is deeply tied to my own personal connections with the deeper layers of the film. Me telling you about the easter eggs scattered throughout the film’s entirety does do justice to how amazing it felt to watch them unfold in real time. Watching Larson struggle to create the one song his new play desperately needs in the magic hour is fine on the surface, but for those of us who have spent sleepless nights trying to find the right words in a song or a joke or a video or a review, the struggle portrayed cuts a little deeper. “Tick Tick…Boom!” champions creativity and artistry without downplaying the realities of what it takes to bring those creations to life. Miranda has a deep understanding of both success and failure, and that knowledge and personal experiences pour through each and every scene from start to finish. Hell, Miranda actually starred in a off broadway run of “Tick Tick…Boom!,” and his vast, intimate understanding of Larson’s work shines through here.

The music is great, the performances are stellar, the story is filled to brim with hope and love and sadness and success and sacrifice. It’s full of questions without answers, and a reflection of what it takes to be an artist. It is rollercoaster of emotions, but at its core it is a love letter to artistry. It reveres creation, creators, and musical theater without idolizing them or posturing them up on unrealistic pedestals. It captures both the power and pressures of broadway and art, and in the end gives the message of hope and perseverance. It may have somewhat of a tragic, real life ending, but Miranda seems to understand what Larson really meant with his music, and honors him and his work in a way I believe Larson would be proud of and moved by.

“Tick Tick…Boom!” is a must see for any artist, creator, and musical theater fan. It’s also a must see for anyone who’s looking to see beautifully crafted and wonderfully acted musical adaption. You know what? It’s a must see, period. I went into this cautiously optimistic going into this. I wasn’t sure what skills Miranda would have behind the camera when it comes a feature length film, and I didn’t want anything to taint my love for Larson and “Rent.” Luckily, “Tick Tick…Boom!” is wonderful movie going experience, on that ranks as one of the best films of the year.

This is the life, indeed.

Watch it on Netflix now.