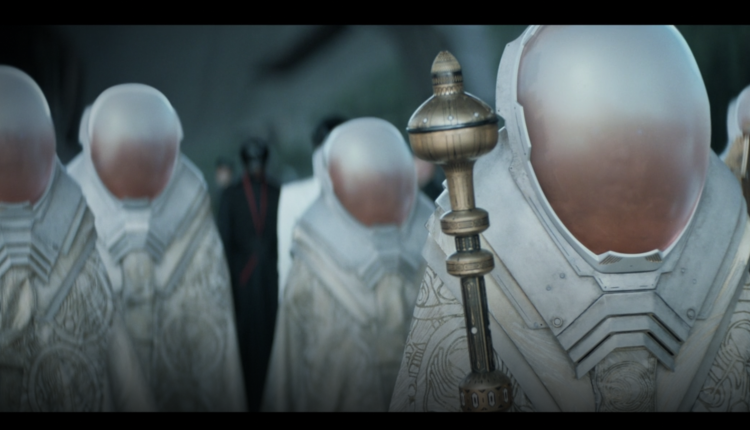 If you’ll recall, in the first 10 minutes of this new version of Frank Herbert‘s seminal science fiction tale, a delegation from the Paddishaw Emperor Shaddam IV comes to House Atreides homeworld of Caladan. The reason? To officially offer stewardship of planet Arrakis to Duke Leto, taking over from the notorious House Harkonnen.

It’s a pretty impressive showing from the Imperium, not gonna lie. The ship alone is massive, and the Spacing Guild’s presence is…notable. Many fans (myself included) assumed these dome-helmets were to hide first stage Navigators, already starting to be changed by their addition to the spice Melange.

You can see why we’d think that, right? Especially when compared to David Lynch‘s masterful 1984 version of “Dune.”

Turns out, those assumptions were totally incorrect, and the helmeted persons were not in fact Navigators. Villeneuve himself confirmed it while speaking with Empire Magazine.

“They were Guild representatives. They were not Navigators. We don’t see the Navigators in this first part,” Villeneuve said. “That was the one of the challenges of this adaptation – I was trying to keep mystery alive as much as possible. We don’t show the Emperor, we don’t see the Spacing Guild Navigators. There’s a lot of characters that are mentioned or that are in the background that we don’t see right away. I tried to keep all the space traveling as mysterious as possible, like almost bringing some kind of mysticism or sacred relationship with that part of the movie. Everything involving space is just evocated and very mysterious.”

Well, color us curious to see what they DO end up looking like in “Dune Part Two.” We have super high expectations for so much of the second half, including Alia, Princess Irulan, a certain ghoula, and of course, Feyd Rautha Harkonnen.

We’ll keep you updated on all news from the Landsraad houses and Fedaykin sietches. Shai Hulud. “Dune” is still in select theaters, and available to stream in HBO Max.