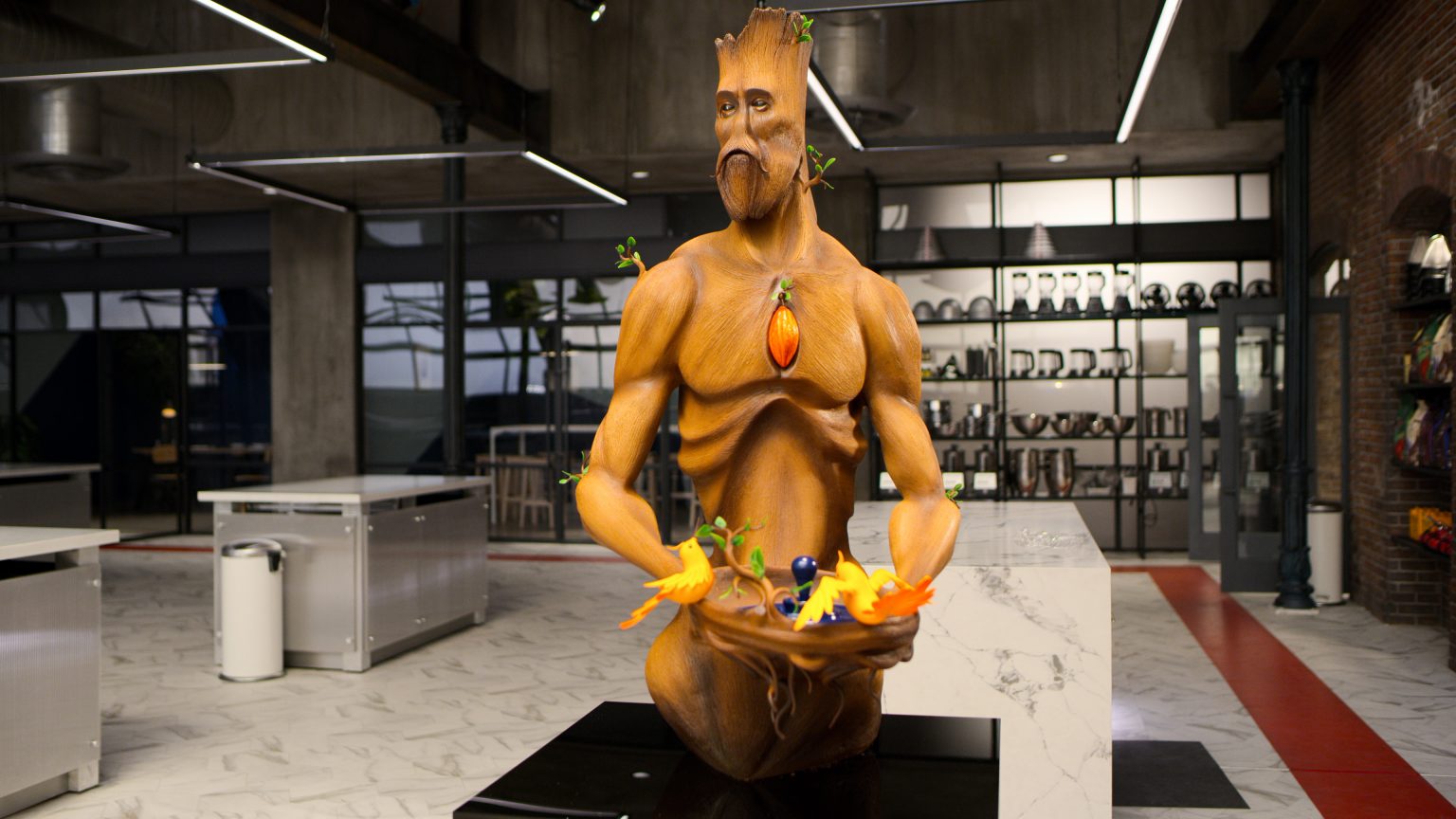 We are avid foodies and gourmet enthusiasts here at Nerdbot. Sure, we don’t write about it as much as we would like, but, that doesn’t mean it isn’t right there in our minds almost all the time. Imagine our delight when Netflix unveils a new competition series focusing on the world of chocolate. Not just like…a Hershey bar (not that there’s anything wrong with that)…but some of those incredible sculptures and creations made entirely out of chocolate.

Amaury Guichon, world-renown chocolatier, hosts this 8-episode series. As you can see from the official trailer, things get complicated fast for the contestants.

Yes, that’s a damn chocolate telescope! You can see Guichon’s build of it here.

Eight top pastry and chocolate professionals are coming to School of Chocolate to take their skills and careers to the next level. Their teacher is world-renowned chocolatier, Amaury Guichon, known globally for creating mind-blowing chocolate showpieces and unbelievable pastries. One lucky student who manages to prove themselves ‘Best in Class’ after eight episodes will win a prize package that includes a career-changing opportunity.

Amanda Miller, Pastry Chef Instructor at The Culinary Institute of Michigan
Before becoming a Pastry Chef, Amanda served in the United States Army. Her family has a strong military background with both of her parents and all three of her brothers serving in the military; it was always in her blood to serve her country as well. After leaving the Army, she pursued her passion of pastry and chocolate and enrolled at The Culinary Institute of Michigan. After Amanda graduated, she was asked to stay at the school, where she is now a Chef Instructor and teaches Baking & Pastry Arts with an emphasis on chocolate work. In addition to teaching, Amanda also moonlights at Patricia’s Chocolates in Grand Haven, MI, where she works as a pastry chef and chocolatier.

Cedrick Simpson, Pastry Chef at Capital City Club
Coming from a military family, Cedrick spent part of his childhood in Germany where he was exposed to some of the finest pastry and chocolate. It was perfect for him because he always had a sweet tooth and was a big fan of the movie Willy Wonka & The Chocolate Factory. Cedrick attended Le Cordon Bleu to become a Pastry Chef and he can’t see himself doing anything else. Cedrick describes his pastry style as abstract – he likes things that are out of the ordinary. Prior to taking his current job as Pastry Chef at the private Capital City Club in downtown Atlanta, Cedrick worked in several high-profile hotels including The Whitley and Ritz-Carlton in Atlanta.

Daniel Joseph Corpuz,Pastry Chef and Chocolatier at Daniel Corpuz Chocolatier
Growing up, Daniel, like any Asian-American brought up in a Filipino immigrant household, was a straight A student who was quite ambitious. His fascination with pastry started in middle school after he was inspired to bake cupcakes for one of his brother’s birthdays after watching a TV show all about cake decorating. From there, he stuck to cake decorating and competed in several cake competitions around the country. To pursue a career in the world of pastry, Daniel enrolled at the Culinary Institute of America, the one and only school he applied to for college. During that time at the CIA, Daniel was exposed to several facets in the industry, of which included restaurant style desserts and chocolate. He’s worked at the 2-Michelin star restaurant The Modern, as well as at the acclaimed Manhatta on the 60th floor of 28 Liberty. He recently launched Daniel Corpuz Chocolatier, a chocolate brand that creates handcrafted artisan Filipino inspired bonbons and confections.

Juan Gutierrez, Pastry Chef at Four Seasons Hotel Chicago
Originally from Colombia, Juan is an outgoing, passionate and free-spirited Chef. He loves having fun, living each moment to the fullest, and making people smile. Juan loves pastry because there are no limits to what you can do. Juan approaches everything with excitement and optimism, especially when it comes to Pastry. Juan comes from a family of doctors, but ever since he was a little kid, he loved baking. He originally decided to follow in his parents’ footsteps, but soon after arriving at medical school, he decided that being a doctor was not in the cards for him. Much to the dismay of his parents, Juan dropped out to pursue pastry. He attended the Institute Mariano Moreno in Colombia and once he came to the States, 9 years ago, he refined his education at the French Pastry School in Chicago. Juan has earned a number of accolades. He was named a Jean Banchet nominee for Rising Pastry Chef 2020 and Top 5 Pastry Chef in Chicago. He also won Best Chocolate Showpiece and Best Dessert Table at World of Chocolate 2018.

Mellisa Root, Pastry Chef, Owner of The Hairy Lobster and Mellisa Root Chocolates and Confection
Mellisa spent a good part of her childhood in the kitchen. Starting at age 9, she was responsible for making the family dinner one day a week and was always on the hunt for new ideas, checking cookbooks out of the library. However, when it came time to choose a career, it was her mother who actually suggested culinary school and Mellisa obliged. She attended California Culinary Academy, got a degree in pastry, and loved every minute of it. She jokes today that her career was all her mother’s fault! Mellisa won three gold medals as the Pastry Chef on the American Culinary Federation National Culinary Team USA in 2008. She’s participated in a number of other high-profile pastry competitions, and even coached the US National Team to win a gold medal at the Luxembourg World Cup in 2012. Currently, Mellisa is the Executive Pastry Chef of Farmington Country Club and has recently launched her own chocolates and confection business aptly named Mellisa Root Chocolates and Confections.

Stephanie Norcio, Former Executive Pastry Chef at The Strand House Manhattan Beach
Stephanie comes from a big Italian family. Since her grandparents owned an Italian restaurant, she insisted on learning to flip pizzas at a young age, which helped lead her to her love of pastry. Stephanie also used to love baking with her mother and Nonna and had an Easy Bake Oven that got plenty of use. Following high school, she attended Le Cordon Bleu in Pasadena and got a Certificate in Baking and Pastry Stephanie describes her pastry style as old-school American combined with modern local flavors, drawing heavily from her Italian roots, and the new edible garden she’s been working on in her yard! Stephanie has worked with celebrity chefs Wolfgang Puck at Hotel Bel Air and Todd English at Beso. In 2018, she was invited to participate in the James Beard Celebrity Chef Tour, and prior to the pandemic, she was the Executive Pastry Chef at The Strand House in Manhattan Beach. Stephanie dreams of opening her own shop that is “a combination of everything” – traditional Italian and American desserts, chocolate truffles, and wedding cakes, but also pizza and flatbreads.

Thiago Silva, Executive Pastry Chef
Thiago Silva discovered his love of baking when his mother asked him to help translate a recipe for her. He loved helping her and eventually she signed him up for a cake decorating class where he could learn more. Thiago did not go to pastry school, but instead at 16 started working in different kitchens under different pastry chefs to learn all he could from them. He has a strong background in both savory and pastry, and started at the very bottom in the kitchen, working his way up. Because he didn’t have formal training, Thiago doesn’t get hung up on the ‘right’ way to do things, but instead experiments to see if he can find a new or better way to get something done. He has two young sons and loves to go all out on their birthday cakes, once sculpting a 2-foot-tall Elmo out of chocolate for his son’s 2nd birthday. Thiago is opening his own bakery and sweet shop, SALT Patisserie, in Newton, MA early 2022.

Tyricia Clark, Owner and Pastry Chef of T Cakes
Tyricia’s love for pastry started at a young age. Growing up in Louisiana, Tyricia would help her Grandmother bake during the holidays and subsequently started baking pastries for her classmates. As she got older, she began baking cakes for her nephew. Seeing how passionate Tyricia was about pastries, her family encouraged her to enter a local news baking contest that was organized by the Louisiana Culinary Institute. Entering the contest inspired Tyricia to enroll at the Louisiana Culinary Institute and pursue a career as a Pastry Chef, and she hasn’t looked back since. Tyricia’s pastry style is a modern take on classic American and French pastries using flavor profiles that remind people of a nostalgic and happy time. Tyricia’s love for making chocolate showpieces began during her time at the luxury resort, The Greenbrier in West Virginia, where she worked and learned the art of making showpieces by former U.S. World Chocolate Masters competitor, Jean Francois Suteau. Having been raised by a single, hardworking Mom has pushed Tyricia to succeed and strive for the best. Everything Tyricia does is for her family, and is to build generational wealth for my family’s future.

Needless to say, we’re pretty excited. “School of Chocolate” is set to hit the streaming service on November 26th, 2021.