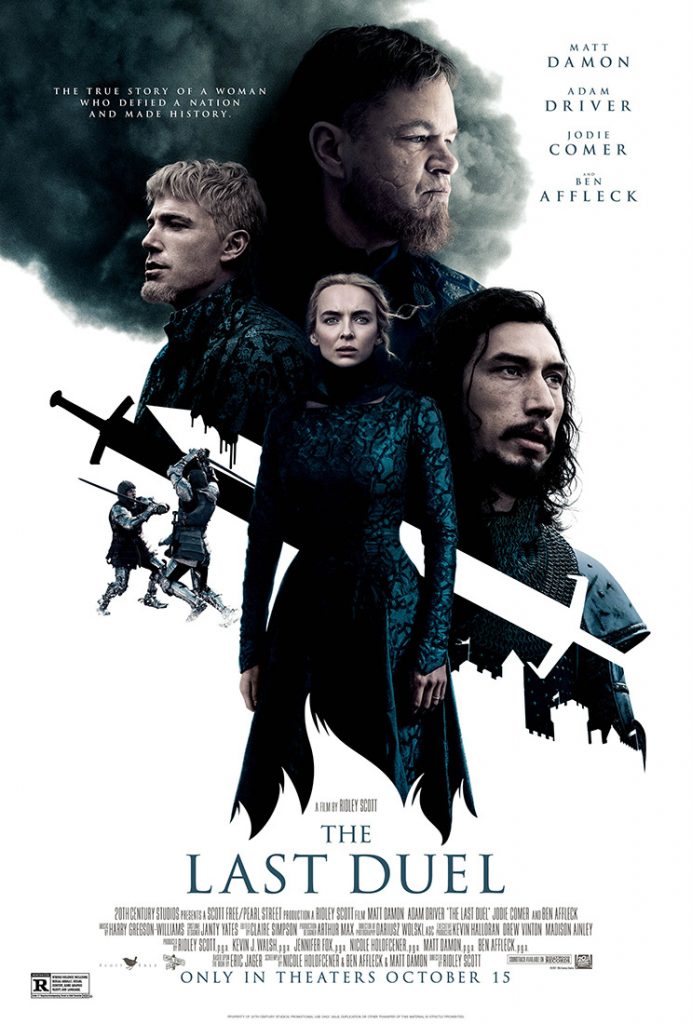 Whenever a film is helmed by Ridley Scott, there’s no question about production quality and performances, it always comes down to how the script plays out on screen. With his latest film “The Last Duel,” if nothing else, it will be remembered for giving Matt Damon and Adam Driver yet more amazing character performances. It’s also BY FAR the single best example of a 14th century duel between armored knights ever committed to film.

The story is an adaptation of a historic event which occurred at the end of 1386. Driver plays Jacques Le Gris, and Damon plays Jean de Carrouges, two squires in the service of Count Pierre d’Alençon (played by Ben Affleck). Jacques and Jean are longtime friends and companions-in-arms, but when Jean falls out of favor with the Count, and Jacuqes’ becomes a new court favorite, their friendship quickly falls apart. A few years later, Jean takes a beautiful new wife, Marguerite de Carrouges (played by Jodie Comer). Eventually Jean after returning from a military campaign to Scotland, travels to Paris for his payment, only to return home to have Marguerite tell him that in his absence, Jacques had broken into the manor and raped her.

From there, Jean accepts her story and declares that because any regular trial would be held before the Count (who would rule in Jacques’ favor), he will appeal to the King for a judicial trial by combat. Which if Jean loses, not only would he be dead, Marguerite would be burned at the stake.

The production quality is top notch, and the settings, costumes, and atmosphere is brilliantly executed. The main body of the story is shown three times, each one presenting a version of the truth from the point of view from another of the main figures (Jean, Jacques, and Marguerite). It reflects on the malleability of truth through perspective. The differences are more subtle than profound, which lends nuance to interpretation. However at nearly two and a half hours, it’s not a short film, and there are times (especially on the 2nd and 3rd times through the perspectives) when it feels like it could have been trimmed up by probably 20 minutes of the runtime without losing the point of what was trying to be represented. It’s not at all bad by any stretch of the imagination, but it’s not likely going to be a film that’s rewatched in full multiple times by most viewers.

The overall story is framed by the duel itself, the preparations open the film to the start of the first pass on horseback with tipped lances, then to the three perspectives, and then the story completes with the rest of the duel. Hollywood most often takes prolific shorthand when it comes to presenting armored combat (Yes, we all love “A Knight’s Tale” but it’s not like anyone took their combat scenes to be realistic).

In “The Last Duel,” Scott dials it to 11. Finally everything from the heavy draft horses and their armor to the chain and plate worn by the combatants has the sound, movement, and feeling of genuine armor (Note: I’ve worn chain and full plate and fought with steel, so have a decent experience with the difference). The fight is not short, and it is brutal, graphic, and desperate. The buildup and fight by itself makes the film worth the price of admission.

Driver’s performance as Jacques gives him a far better version of a potential-villain than Kylo Ren ever was. Marguerite delivers a subtle performance which perhaps is a bit too nuanced. The minute differences between the various of “the truth as presented by..” (as the chapter title cards read) might have been better served it they were a bit more specific. If you’re not paying very close attention to what everyone is saying in each version, it may well feel like you’re seeing almost the same scenes three different ways.