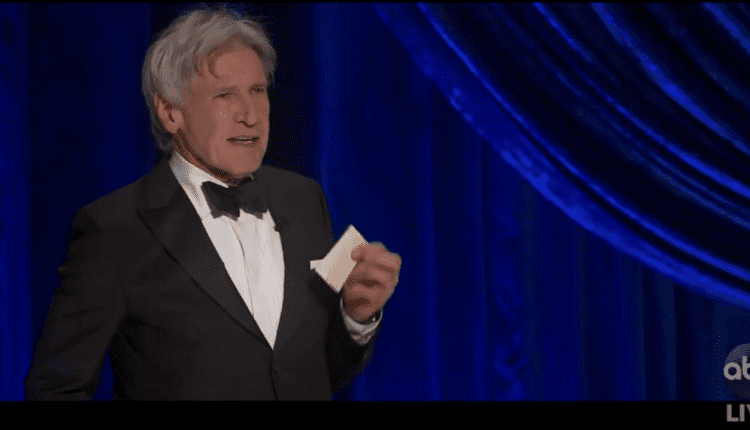 Last night during the Oscars telecast, audiences were treated to a rare Harrison Ford public appearance. For those of you who seemingly forgot, the actor is self-admittedly painfully shy. He doesn’t really like large groups of people, and absolutely hates public speaking (for the most part). Sure, this can sometimes come across as out of touch, possibly aloof and uncomfortable, but it was just normal, pure Harrison Ford.

While introducing the best editing nominees, Ford read several editorial comments about one of the greatest films of all time, Ridley Scott‘s seminal “Blade Runner.” If this moment was lost on you, maybe it’s because you forgot the Oscars were being held (in part) at Los Angeles’ Central Station.

“I’d like to share some notes, some editorial suggestions that were prepared after the screening of, uh, a movie I was in. Opening too choppy. Why is this voice-over track so terrible? He sounds drugged. Were they all on drugs? Dekker at the piano is interminable. Flashback dialogue is confusing. Is he listening to a tape? Why do we need the third cut to the eggs? The synagogue music is awful on the street. We’ve got to use Vangelis. Up to Zora’s death, the movie is deadly dull. This movie gets worse every screening.”

“Blade Runner” was filmed in the building, and we absolutely loved the connection between the two. Specifically, Union Station is used as Los Angeles November 2019’s police station.

If you’re curious about the actual notes he was reading, here is the summary from an early screening in January of 1981. The film officially released in July of 1982.

Let the most controversial part of that segment be whether or not the voice over really is as bad as we all remember. Spoiler- it really, really is. Final Cut, or GTFO.

11 Signs You Are a Big Marvel Fan

HBO Announces Production Kickoff for “House of the Dragon”