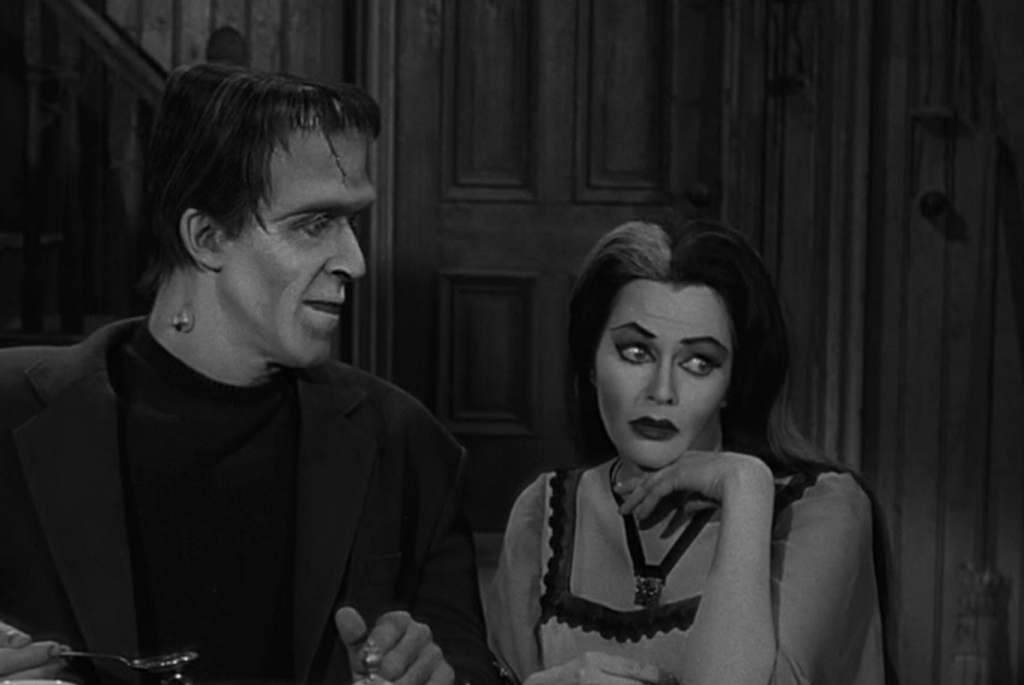 You Should Rewatch “The Munsters,” Here’s Where It’s Streaming

With Rob Zombie‘s “The Munsters” film coming and it being so close to Halloween, I went on a mission to find where I could watch the original series. I found it! I realized that this is a must watch for those who loved the show as a kid. Especially now, when it’s almost Halloween. I’m sure there are going to be many different call backs to the original show in the film.

Visually, there could be many nuances that might be missed if you don’t remember the original series.

Just As Good As You Remember

“The Munsters” is one of those shows that you can put on and keep it running, or you can watch one or two and turn it off. Before the days of binging series, they used to wrap up episodes quite nicely. They wanted you to tune in again but they also were making these to syndicate. Meaning you needed to have episodes that would stand alone when re-run on other networks.

The show is so wholesome with Lily, Herman, Grandpa, Eddie and Marilyn. The family is more functional than even the Addams’ Family. There I said it. “The Munsters” are superior to “The Addams Family.” [Editor’s note: this opinion does not reflect the stance of all of Nerdbot, although we DO really love the show.]

There are a lot of contributing factors to why this show still works. The short of it being that the writing and acting are superb. Yvonne De Carlo, Fred Gwynne, Al Lewis, Butch Patrick, and the long list of Marilyns including Pat Priest and Beverly Owen all did a fantastic job. This rag tag bunch made a great show. Also, we’re happy they went with them because let’s face it, Lily and Eddie in the original pilot weren’t working.

The Scenery is Everything

The house, wardrobes and everything in between makes this show amazing. There is a scene where Herman and Grandpa come from the garden and they pull cobwebs in from the outside. Just so happy that “everything is dying early this year” which is “nice.” They’re so happy about it! The phone from today’s perspective is a relic. In fact, a lot of things they have in their home like a grand piano, a hidden door with a spinning wall, wardrobes that you can disappear into.. It’s all just so beautiful to the gothic soul.

For me, my favorite thing is how they portray the weather. It seems to only be windy or rainy at their house. For those who love gloomy weather like the Munsters, it would seem like 1313 Mockingbird Lane is the ideal place to live. They even comment when it does clear up that they must “Try not to let it ruin their day.” Hilarious!

They Look Out For Each Other

One of my biggest sells to watching the original series is how the family interacts. You want to teach your kids a lesson about how to stand up for their family, this is it. Marilyn uses her family as a barometer for her potential suitors, which is a nice thing to do. Especially because she adores her Aunt Lily and Uncle Herman. Lily gets mad on Herman’s behalf when he’s being picked on. Like at that masquerade party where he reveals his face and wins first prize in the costume contest. She storms the family out of there and keeps his well being in mind the entire time.

There’s not an episode where the family is ever out to get at one another and I find that wholly refreshing.

The Jokes Still Stand Up

Yes the jokes still stand up. Even the ones about Marilyn and her “unfortunate circumstances.” You might think that jokes about people being ugly wouldn’t hold up in today’s society but it still very much works. Because it’s supposed to be implied she’s ugly because she’s actually a conventionally beautiful woman and she thinks that she’s the reason that all her beus run away. The banter is light hearted and it’s something that even a child understands.

Because everything is so contrary to what dictated a “normal” family back in the 1960’s when it came out the jokes translate well today.

The main reason that I wanted to write about why you should re-watch this is because Rob Zombie is working so hard on his film. With the set completed and all of the shots he’s posted on Instagram, I KNOW that if you don’t watch the series again, you might miss some very important details. It could be something as small as which necklace Lily wears to what occasion.

I’m sure that because he wouldn’t want to exclude new fans there won’t be too many callbacks in the script. But those who watched the show religiously will probably be able to pick up on many things included in the set design, that they would recognize from the original series.

Here’s Where You Can Watch “The Munsters” For Free

On my mission to relive my childhood with “Munster Mondays” I found a lot of places that will charge you to watch the show. Well, technically you’d own it digitally via Amazon. But it turns out NBC’s Peacock has both seasons one and two up now. If you want to watch the movies however, Amazon is your only choice. They have “Muster, Go Home” as well as the less well received “The Munsters, Scary Little Christmas” which starred Sam McMurray, Ann Magnuson, Bug Hall, and Elaine Hendrix.

When Does The Movie Come Out?

So far we don’t have a date for when Rob Zombie’s “The Munsters” comes out, but we do know that it will release simultaneously in theaters and on Peacock. Stay tuned for more news on “The Munsters.” We’re keeping an eye on everything!