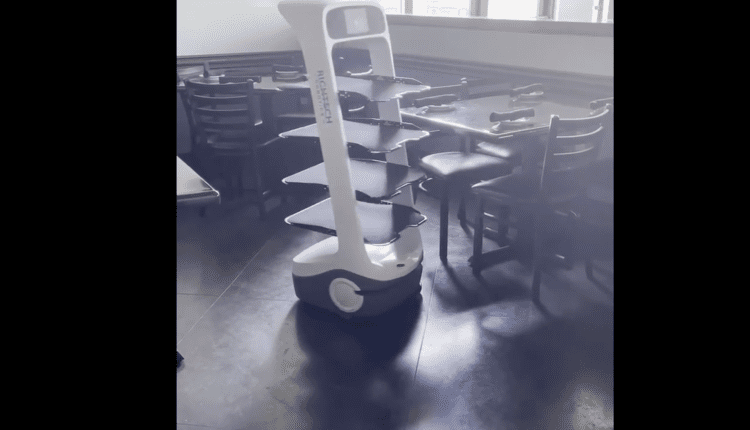 The idea of automation has long been the bane of labor unions and workers rights activists for decades. No one really wants to be replaced at their job by a robot. Hell, in the legend of John Henry, the titular folklore hero competed against a steam powered rock driller only to die of cardiac arrest after beating the thing. But times have changed since then and the COVID-19 pandemic has created a labor shortage. So what’s a restaurant to do when understaffed? Hire a robot!

If you were expecting something like Andy from “Bicentennial Man” you’re probably going to be just as disappointed as you were after having watched “Bicentennial Man.” Fully functional bipedal robots would be a bit much for a small restaurant.

According to NBC News, the unnamed robot costs only about 1/3rd of that of a regular human employee. The restaurant is quick to note though that the automaton is in no way a replacement for a human being, it’s just a stop gap to help with carrying dishes, plates, etc. back and forth; something humans can do with more finesse.

The Matradee robot is made by Richtech Robotics and is built with the ability to speak in various languages along with motion sensors to ensure it doesn’t bump into people or objects. It also has a kind of novelty factor to it given that its not a common sight in restaurants right now; though given the current labor market, that might not be the case for long.

Businesses that pay lower wages have been hurting quite a bit lately. The pandemic has caused many workers to realize that they’re worth more than what they were being paid. Some pundits will be quick to blame unemployment benefits for this, but the truth of the matter is that wages have not risen consistently with cost of living, and the pandemic has put this notion to the forefront. Unfortunately, many small restaurants operate with terrible profit margins, so offering better pay is difficult. Hence the lack of job applicants, hence the rise of the robots.

Food service is not an easy field to work in, but its a job that so many of us rely on for enjoyment and sustenance. Here at Nerdbot, we welcome anything that can constructively make the lives of food workers easier as the industry continues to bounce back from the ravages of COVID-19. Though we’d also like to point out, whatever you do, please do not name your robot “Skynet.” Nothing good can come of that.

Real Life Patrick and SpongeBob Spotted In The Wild!

Heath Andrews May 19, 2022
Let's be honest for a minute; life is hard. We all have our own coping mechanisms for dealing with the curveballs…
Movies & TV