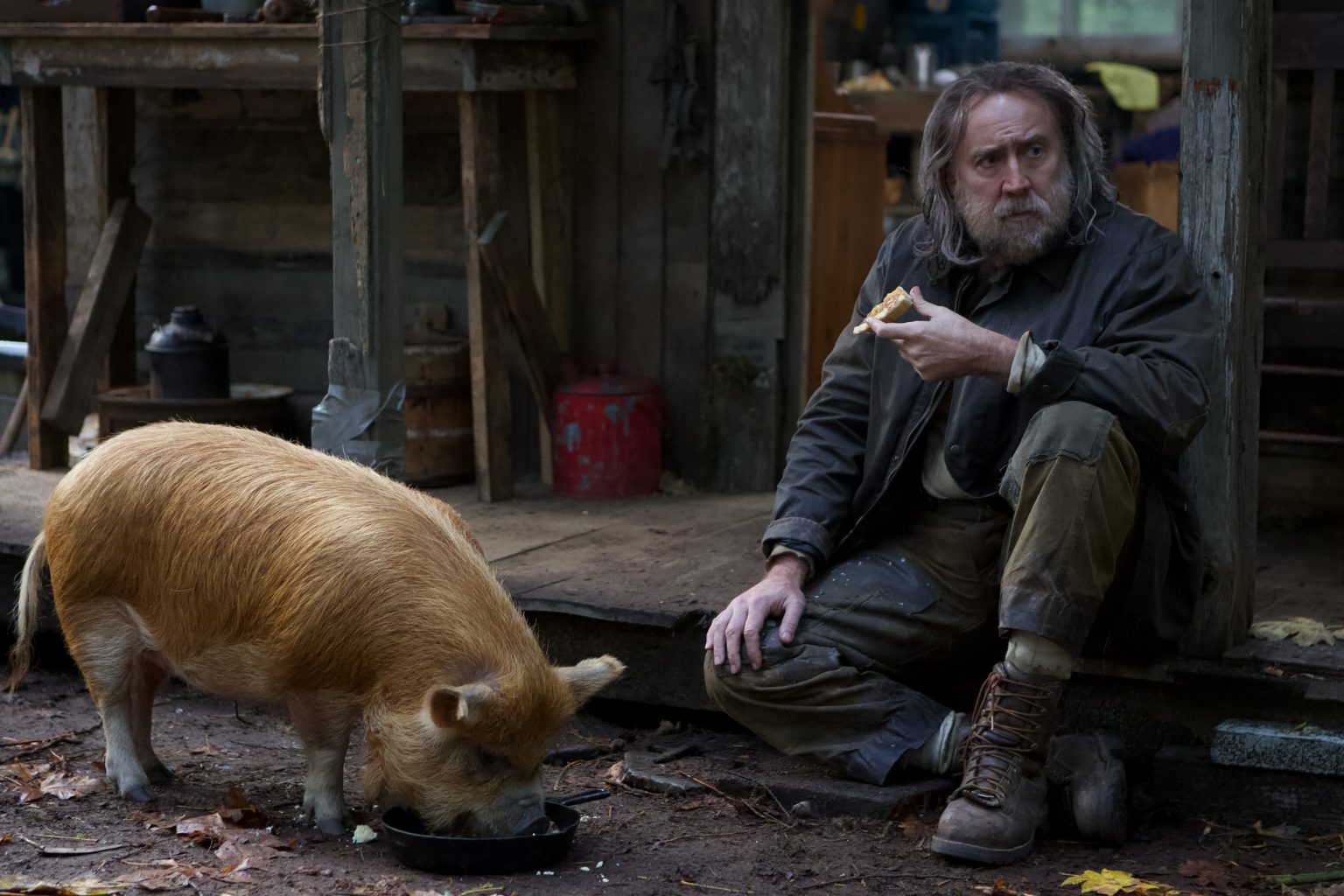 “Pig” is captivating to watch, and a rare joy of a film. A tense character drama that unfolds with an intimacy and tension that is THIS satisfying is more than worth the 90-minute run time. Nicolas Cage plays Rob, a reclusive mountain man whose sole companion is a truffle hunting pig.

In recent years Cage has been jumping from one vastly over the top genre film after another. Such batshit crazy films such as “Mandy,” “Prisoners of the Ghostland,” and “Willy’s Wonderland,” have given the notion of seeing a Cage film will result in it being at best, a B-film exploitation film. There’s nothing wrong with that, and many of his films have been at least fun, if not really the names one thinks about come award season.

Then “Pig” appears, making us remember that actor we first encountered when he got his Academy Award and various other awards and nominations, back in the days of “Valley Girl“, “Raising Arizona,” “Leaving Las Vegas,” and “Moonstruck.” “Pig” could have been just a banal piece of melodrama, but in his feature directing and writing debut, Michael Sarnoski, has just the right hand both on his story and actors to pull out something that feels utterly masterful.

One thing that will make the experience most worth it is to go in knowing literally as little about the film as possible. So beyond what I’ve already said, I’ll drop my rating now, and then after the next image go into some spoilers.

Rob, for all that it feels like a pre-20th century opening sequence, with his primitive cabin in the woods, and living off the land. It turns out with the arrival of Amir (played by Alex Wolff) in a bright yellow sportscar, that Rob has opted for some reason to be here. The details aren’t laid out in long monologues at the outset, the audience needs to earn it along the way. These characters all know what is going on, so they don’t need to rehash the obvious just for the benefit of the audience. And in this case it lends itself to a feeling of realism more than such moments often engender.

Amir is Rob’s truffle buyer, which brings in a living amount for the both of them. In the dark of one evening, strangers break into the cabin and knock Rob unconscious and violently capture the pig, carrying it off. Now Rob sets off on a hunt for those responsible and to recover his companion. Sure, given how his films have been of late, one might expect a “Rambo” by way of “John Wick” mash up of revenge. But that’s not this by any stretch of the imagination. The people are all broken in various ways, but they aren’t beyond touch with reality.

If you want a film to watch that will have buzz come award time, “Pig,” is the one to go for. Plus it will remind you, that within a particular range of characters, Cage really has a deep level of talent.

“Pig” is rated R, and is playing currently in theaters.