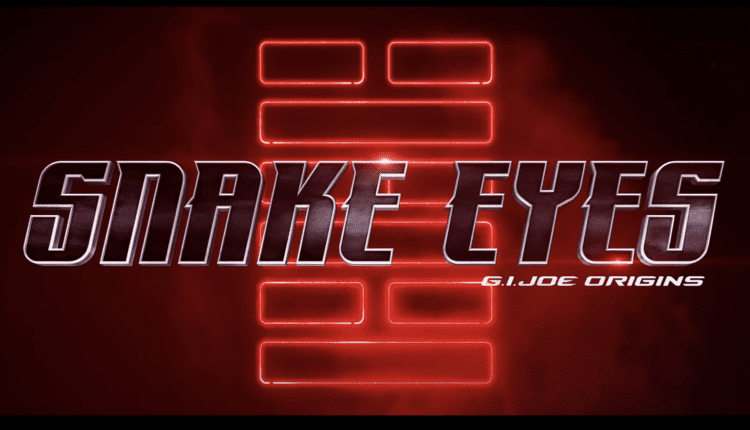 Before we dive into this absolute trainwreck of a film, let’s get all preconceived notions out of the way about “Snake Eyes” first. I can already hear your complaints, but I went into it with the wrong expectations! it’s not suppose to be Shakespeare, and I hated it before I ever saw the film. At the end of this evisceration, you very well may still feel that way, but I want to be clear up top so you can understand not just how disappointed I was with “Snake Eyes,” but why.

I went into this film expecting a mediocre, cliche riddled action film based on a cartoon based on action figures for children. I was and still am fully aware that there is a bare minimum bar here, and no matter how I felt about the film after watching it, will not and should not be compared to films outside of its own genre. So yes, I knew that this wasn’t going to be “Gone with the Wind,” and I’d be very foolish to expect it to be or critique based on a completely different set of criteria. Lastly, I was genuinely excited to see this. I was rooting for even as people warned me not to, because despite what you may believe about critics, I don’t actually root for films to fail. I want most of them to succeed, and this one sports a terrific cast who all deserve their shot and place in a box office franchise.

What I actually wanted from “Snakes Eyes” was a middling origin story packed with action tropes and cliches who’s martial arts action sequences made up for any lacking a script like this would (and does) have. Unfortunately, it is a missed opportunity on all levels, wasting the immense collection of talent and delivering a less than zero effort in both its action and script. There is legitimate potential here and al of it is squandered away by some of the most baffling camera work I’ve ever seen in a film. I can forgive a lot if you good ninja action, but “Snake Eyes” seems unconcerned with playing to its one strength thus making all of its flaws blinding. I can’t even believe I’m going to say this, but I think it may just be worse than “Rise of Cobra,” and I absolutely HATED that film. It may have been an absolute failure, but at least I could see what the hell was happening.

Directed by Robert Schwentke (“Red,” “Divergent“) and written predominantly by Evan Spiliotopoulos (who chewed his teeth on a number of straight to video Disney sequels), “Snake Eyes” follows every single origin story trope you can imagine, as if the story was created by an “This Is an Origin Story” check list and the writers room created the entire plot by checking off the boxes. Our hero experiences a traumatic experience as a kid, grows up to hit rock bottom, gets an opportunity for revenge, becomes tangled in a web of friendship and betrayal, our hero gets tested, learns a few lessons and ultimately completes his journey by saving the day. That is the bare bones; which would be fine if they weren’t also trying to set up a new franchise with every single new character that gets introduced. Everything outside of this main plot feels forced and out of place, bloating the narrative and making the whole thing overly long and downright boring. If you’re going to try and set up a franchise, “Batman V Superman” is NOT the template you want to be using for success.

Side Note: For the love of GOD stop trying to give a backstory to every single name. Of all the questions I’ve ever had about any character in GI Joe, never once have I asked myself “I wonder why they call him Snake Eyes.” Stop it. Whatever reason you’ve conjured up in your head, it’s stupid. It’s a codename and leave it at that. It is literally the worst part of “Solo: A Star Wars Story” and never gets any better no matter how many times you try and spin it or bake into the script. No one watched “GI Joe: Retaliation” and went “I wonder why they call The Rock Roadblock,” and then in the next film we learn that his parents were killed during a detour with a roadblock set up by Cobra. See? How stupid does that sound? Stop it. Please, just stop.

Because the script is trying to do too much, we actually don’t even have a protagonist. I know it’s suppose to be Snake Eyes (Henry Golding), but the things he does and the people he does them too are so selfish and cruel that his supposed redemption at the end isn’t even just unearned, it simply doesn’t make sense. Every bad thing that happens is a direct result of his own selfish actions, and by the time he decides to have remorse and do right the damage is irreparable. It is so bad that at one point I even asked myself out loud, “Am I suppose to be rooting for him?” It’s all so manufactured and without purpose, with the primary goal being to get him in the suit and pit him against Storm Shadow (Andrew Kogi). How we get there doesn’t matter in the slightest, as long as it all plays out the way we went the franchise to go. Throw in a couple of giant, terrible, out of left field CGI anacondas to really drive home the snakes and the eyes in “Snake Eyes” and you have a recipe for an absolute dumpster fire.

I’m not kidding about that either. I’m talking big, giant, early 2000s snake monsters that look about as good as the “Scorpion King” that somehow slither their way into the plot as an integral piece of the story. It reminded me of the giant metal robot spider in “Wild Wild West,” where some producer refused to pony up funding unless they put this thing in a movie, so they rewrote the entire ending of the film just secure the capital to get the film made. The snakes in “Snake Eyes” feel exactly like this and it is mind blowing that anyone thought this was a good idea. But the bad ideas don’t stop there, because with all of that I could STILL walk away with an ok feeling if the action was worth it.

“Snake Eyes” wastes its entire cast of competent actors and martial artists by filming all of the action with extreme shaky cam and bizarre cuts. Editor Stuart Levy somehow believes that best action is action we never, ever, EVER see. And if we even thought we may get a chance to see something, the cameraman is blackout drunk trying to keep it steady. It ends being a film with almost no actual action, just a bunch of action set ups and set pieces that constantly cut away before anything gets going or zooms in and holds steady on people posing mid fight. Seriously, Yelena would HATE this film with the amount of posing there is. I really want to drive this point him, because the action SHOULD be the saving grace of “Snake Eyes” and I can’t stress enough how poorly it is filmed.

Imagine you’re watching “The Matrix,” and Neo and Trinity enter the lobby to rescue Morpheus. The slow mo is there, the guards come rushing out and point their guns at the heroes, the tension and stage is set for one helluva an action sequence. Neo and Trinity look at each other, and then BAM, it cuts away to Morpheus and Agent Smith having a chat about humanity for 2 or 3 minutes. Then we go back to the lobby, all of the guards are dead, Neo and Trinity walk to elevator, pose, and scene. That is just about every single action sequence in the third act, the rest being indecipherable shaky cam, like a home movie your dad is trying make as his kids play in the backyard, but he’s had a few so its mostly you going in out of frame as he films the grass and forgets he’s holding a goddamn camera. “Snake Eyes” has some of the worst filmed action I have seen in a long time, and I sit through one bad movie a week on purpose.

All of that is perhaps the most disappointing thing about “Snake Eyes,” because none of this falls on any of the actors who are vastly underutilized and poorly written. Henry Golding and Andrew Kogi are terrific actors, and Kogi is a great fighter who’s skills we don’t get to see here. Same with Iko Uwais, who is easily one of the best martial arts actors working today. He might as well not even be in this thing, as all of his talents are wasted and never explored. Samara Weaving as Scarlett is crammed in here for no reason other than to remind us this film is connected to the GI JoeVerse (I hate myself for even writing that) and seems to have only been on set for one day so they could use her on the poster. Weaving is one of the hottest up and coming actresses of our time right now, and she deserves better here. Same goes for Ursula Corbero as the Baroness, who I absolutely adore as Tokyo in “Money Heist.” She’s doing the most with what she has like many of the others, and you can tell she’s having a lot of fun, but her charming presence (especially when briefly paired with Weaving which is easily one of the best scenes in the entire movie and now I want those two to star in literally anything together and I’ll be there front row opening night) leaves far too much to be desired. Corbero gets the benefit of having the only F word in the film, and it’s almost too meta in both its delivery and placement.

The fact is everyone in “Snake Eyes” is forced to do more than they should, giving us glimpses of promise and hope only to be squandered away by bad writing and even worse editing and direction. It’s a disservice to great actors who clearly want to be a part of something but end up getting stuck in dead end. I want all of these actors to get their due as well more opportunities that do their talent justice, so if you want to see Henry Golding shine, watch “Crazy Rich Asians.” If you want to see what Andrew Kogi is actually capable of both in range and fight wise, watch “Warrior.” If you want to see why Iko Uwais needs to be in more stuff all the time, watch “The Raid Redemption.” If you want to see Samara Weaving have way more to and stretch her legs with her superior acting chops, watch “Ready or Not.” If you want to see Ursula Corbero absolutely slay it onscreen with powerhouse performances episode after episode, watch “Money Heist.”

Whatever you do, just don’t watch “Snake Eyes,” which is playing in theaters now.