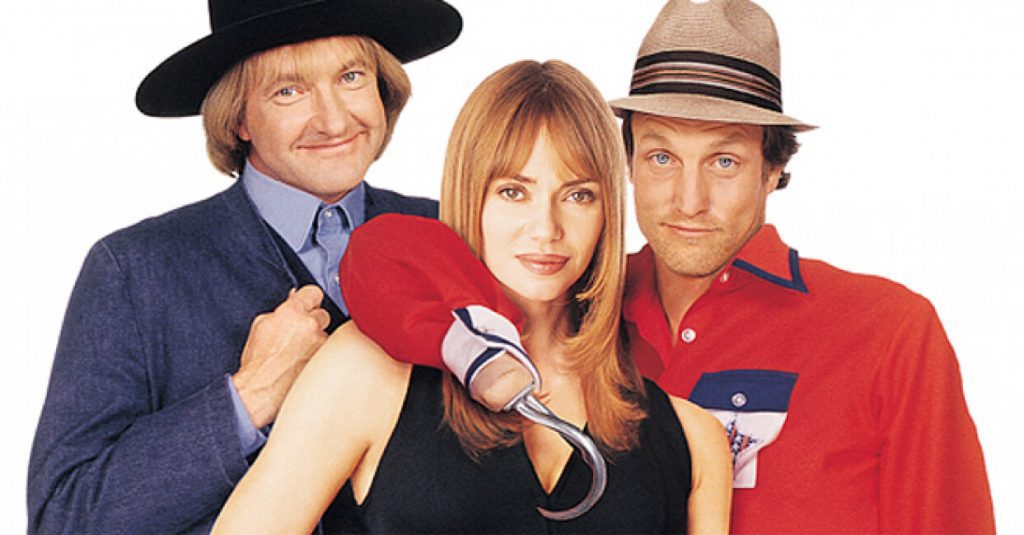 It’s hard to imagine a quasi sports movie about bowling and amish country could rank #68 on Bravo’s 100 Funniest Movies. Add to that a star studded cast and a brother duo who would carry this same schtick throughout the rest of their filmography, and you get “Kingpin,” an often forgotten by many but cherished by few Farrelly Brothers comedy. Truth be told, I could probably write an entire essay on the career and filmography from Farrelly Brothers, as their films venture from some of the most beloved and highly regarded (“There’s Something about Mary“) to the absolute worst of the worst (“Movie 43“) to the controversial, out of their general wheelhouse Best Picture Winner “Green Book.” I know, right? I was shocked too. Who would’ve thought the guys that brought you “Dumb and Dumber” would round out their portfolio with something like that?

None of this has much to do with “Kingpin,” (but it will, I promise) except that it is perhaps one of the strangest yet enjoyable films in their catalog and checks all the boxes the filmmakers became known for. Powered by terrific performances including Woodey Harrelson (which Vulture ranked #2 on the list of his best performances), Randy Quaid, and of course, another stellar scene stealing cameo by Bill Freakin Murray. That’s not to say the rest of the cast isn’t good, but if we had to pick standouts as well as performances that make the film better than it actually is on paper, these are the ones that make “Kingpin” a kind of classic comedy. Much in the way the strange alchemy of pairing Jim Carrey and Jeff Daniels in “Dumb and Dumber” transform an otherwise vapid comedy into a overly quoted, cultural icon, the pairing of Harrelson and Quaid are the true lynchpins that hold the whole film together.

As their careers have been defined by the framework of just about every film, “Kingpin” pairs washed up bowler Roy Munson (Harrelson) with undiscovered, amish bowling savant Ishmael Boorg (Quaid) on a road trip to $1 million prize in a Reno, Nevada bowling tournament. Of course, there’s some gangsters in pursuit of Brunson to collect debt and a woman out of both their leagues (Vanessa Angel as Claudia) who travels with them and of course whacky shenanigans that include a prosthetic hand, hard nipples, and host of eccentric characters like Bill Murray’s Big Ern. When you strip away the bowling, the basic plot devices and narrative elements of “Kingpin” can be applied to just about every film in the Farrelly Brothers’ filmography (See? I can make it all relevant, just gotta stick around for the big reveal). A vast majority of the Farrelly Brothers films center around a road trip of an unlikely pair (usually starting in Rhode Island, with “Kingpin” being the exception) in pursuit of something often spurred by a past traumatic event that almost always end in a silly, chaotic resolve.

The aforementioned films like “Dumb and Dumber,” “There’s Something About Mary,” and even “Me, Myself and Irene” all fit this bill, and all follow the same basic story of “Kingpin.” With “Kingpin” being the second film directed by the Farrelly Brothers, it is almost indistinguishable from many of their early films we just discussed. I’m not doing this analysis of commonality to diminish any of the films, but rather to demonstrate that if you’re good at something, might as well keep doing it. “Kingpin” may be a lot like a host of other films in their catalog, but its narrative isn’t where the similarities end. It’s also really damn funny, packed with hilarious quotes and over the top performances from its stars. The fact is, no one really does road trip buddy comedies laced with unfettered vulgarity quite like The Farrelly Brothers, and “Kingpin” is a strong follow up to their comedy breakout two years earlier.

These guys not only know their strengths, but they also know the perfect people to bring them to life. Again, this is another compliment to “Kingpin” despite being another example of how similar it is to their other films. Just like you can’t replace Carrey and Daniels or Stiller and Diaz, you simply can’t imagine the film being nearly as good without Harrelson and Quaid. Goddammit, do I miss non crazy Randy Quaid. it is a true loss of an incredible talent. No one really does lovable baffoon quite like young Randy Quaid, and “Kingpin” ranks among one of my all time favorite performances from him. I’m a pretty big fan of Woodey Harrelson, and as much as I enjoy his work here, I don’t know that I would rank “Kingpin” as high as Vulture on his top performances. He’s good, don’t get me wrong, but Harrelson is literally a reason to watch anything even with valid misgivings, and I believe he’s got some other, stellar performances that rank higher than his work here.

Regardless, the fact remains that “Kingpin” is remembered fondly because Harrelson and Quaid make it so. “Kingpin” is a strange comedy that you may often forget you’ve seen and once you rewatch it are shocked that you haven’t rewatched it more often. I wouldn’t even rank it as one of the better Farrelly Brother films, but when you remember the film, you simply won’t regret you dusted it off the shelf and popped it again. It is funny, vulgar, silly, and somehow conscience (particularly of the disabled and mentally impaired) yet another common theme throughout the whole of Farrelly Brothers pictures. I won’t pretend that “Kingpin” isn’t off putting and sometimes downright mean spirited in some of its jokes, and I believe that it has a very niche audience of comedy lovers who really enjoy it. It is not surprising that “Kingpin” falls in between “Dumb and Dumber” and “There’s Something about Mary,” as it expands on some of the thematic elements they directors would become known for while also testing the limits of their vulgarity which most certainly culminates in “There’s Something About Mary.”

Sidenote: I have come to the conclusion that I just don’t like Chris Elliot. I’m sure he’s for somebody, but I have held to the belief that he’s the weakest link in “Schitt’s Creek” and even his small appearance as The Gambler here in “Kingpin” rubs me the wrong way. It’s so brief that it shouldn’t even matter, but I would even argue that his role as Woogie in “There’s Something About Mary” is the weakest character in a film that otherwise doesn’t have one (and yes, that includes Brett Farve…ra). I’m sure he’s for someone, as he’s had a long standing and successful career doing what he does, but rewatching “Kingpin” I found myself being more irritated he was in it than I probably should have been.

“Kingpin” doesn’t quite perfect the balance of slapstick, heart, and vulgarity that the Farrelly Brother’s career would later be defined for, but it is most certainly a step in the right direction, and lands more than it misses.