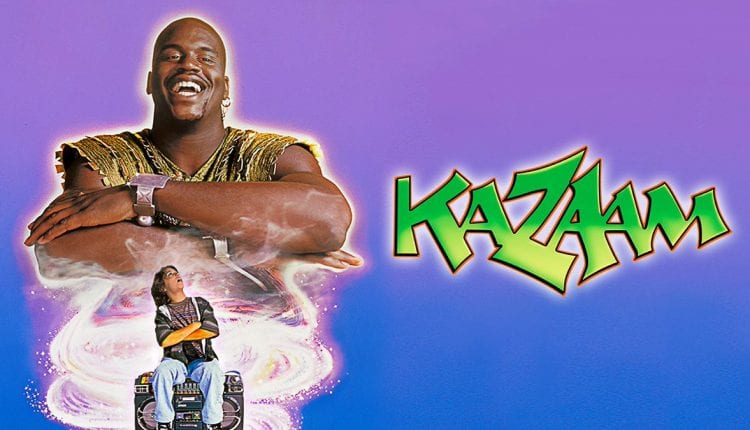 Not only does “Kazaam” make the list for the worst of the worst series, it was also a contender for my other series as the film also turns 25 this month. For a film falsely remembered as “Shazam” starring Sinbad as a genie, you probably haven’t actually sat through this one in its entirety.

Like its Mandela Effect mythical counterpart, “Kazaam” (which stars Shaquille O’Neil) is more remembered for existing than by anyone who has actually seen it. As someone who HAS seen it now, I can see why an entire generation of people created a fictional film out of thin air and ran with it so much it became a collective false memory. Yeah, its so bad- we subconsciously created a different movie starring a different actor with essentially the same premise in hopes to pretend there was something better than what actually exists.

Let’s be clear: I enjoy a good children’s film, even ones that don’t ride the line between adult themes told through digital, kid friendly imagery. I’m completely content with enjoying a good old fashioned children’s film, and for all intents and purposes, “Kazaam” really should be just that. Unfortunately, it can’t even function at its most basic level of film, being more of an extended commercial for possible marketing opportunities than anything that could be considered a cohesive film. It’s as if the film was pitched as advertising campaign for whatever Shaquille O’Neal will be holding as well as a feeble attempt to set up his rap career and then someone realized they can just make a 90 minute infomercial, so someone suggested making Shaq a genie because ‘kids love that shit.’

“Kazaam” is basically budget “Aladdin,” aimlessly wandering around from scene to scene while completely failing to capture the actual magic of having a genie in a bottle (or boombox, because nothing says Shaq Raps! like turning the lamp into a boombox).

The thing is, “Kazaam” actually could be a decent film if you were to take out pretty much everything it’s been made fun of for in the last 25 years. Shaq really isn’t a bad actor, and he’s actually pretty likable on screen. The problem is the corporate greed sitting in the driver seat, steering anything that could possibly resemble a watchable plot into irrelevant things they think they can sell. For example, the fact that every single line Shaq has has to rhyme becomes way more annoying that endearing, especially when you realize that he’s not doing it to be a silly, zany, fun loving genie. He’s doing it because the marketers behind the film want to sell more Shaq albums, so the more rhyming he does the more hot bars they’ll have for his hot rap tracks. The lack of subtly cannot be overstated, as there’s a point in “Kazaam” when out of nowhere, it becomes a rap battle music video between Max and Shaq. Yes, seriously.

The very fabric of what flimsy plot exists in “Kazaam” is firmly planted with this being the sole intention, setting up an antagonist as a music executive? (I’m actually not entirely sure what he actually is, just that it has something to do with music and Kazaam’s demo tape is the doohickey….god it sounds even dumber when I write it out) that somehow discovers that Kazaam is a genie and suddenly wants to kill the kid (Max) to get the genie that he knows about for….reasons? Seriously, all of this doesn’t even take shape until act 3, which is when we meet this weird villain and he’s catapulted into forefront of the story. There is simply no logical reason for this. It’s as if “Kazaam” was in mid production and someone was like, “Hey this commerical for Shaq’s rap career looks great, but you think we should maybe have like…I don’t know some kind of conflict?” and someone slap dashed an antagonist together and whipped up a final act on their lunch break.

“Kazaam” is what happens when you launch a marketing campaign disguised as moviemaking. The film should be about a boy who’s struggling at school and home and comes across a genie who can grant him 3 wishes. That genie basically tells him he can’t solve the problems that he wants, so the kid essentially holds the genie hostage by not granting wishes. A corrupt business man or corporate stooge or really any cliche you wanna make him was also looking for the genie, discovers the kid has it, and it becomes a fun buddy cop adventure story of a boy and his genie and the friendship they develop along the way. And sure, if you want the genie to rap once or twice, whatever. Framed this way, “Kazaam” would be far less assaulting. Instead, the writers and filmmakers decided that what is most important above all else is anything Shaq can sell, and all of those previous plot details mentioned previously become skewed, lost, or deleted entirely.

I personally didn’t want to hate “Kazaam,” but it without a doubt earns its place on the 10% or less list, maintaining an abysmal 5% on Rotten Tomatoes. Turns out Shaq’s been doing commercials long before he ever decided to be the mascot for The General, Papa John’s Pizza and Carnival Cruises. Maybe it shouldn’t be on his filmography list; it should be listed under “Longest Commercial Shaq Has Been In.”

“Kazaam” makes you wish “Shazam” with Sinbad actually existed. [No, it doesn’t by the way.] I don’t care what you think you saw as a kid. But I understand if you saw “Kazaam” and went…yeah I’m just gonna go ahead and make up my own genie movie.

And no Shaq, I’m still not eating at Papa Johns.

“Kazaam” is available to stream on Disney+. For some reason.

“The Mandalorian” Pet Bed Available For Your Furry Child