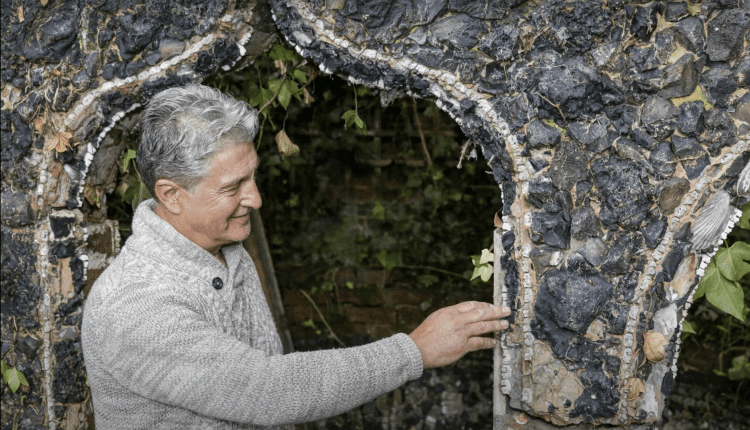 Man Finds Structure Made of Teeth Hidden in Garden

John Bostock was tidying up his property in preparation to move when he discovered something in his garden. Overgrown with ivy for at least over 2 decades, Bostock and his wife had lived on the property for 25 years before finding this structure, made of shells, bones, and teeth.

Bostock said, “It was a bit of the garden we left to run wild and there is wildlife like badgers down there, it was left to nature until now.” Which explains how this gem stayed well hidden all these years.

Experts believe the structure to be a Gothic folly that dates back to the mid-1700s. A folly is an ornamental garden structure meant specifically for decoration. They were often built by aristocrats to be admired from the main house.  It is believed to have offered a garden escape from the hustle and bustle of the manor house that once stood on the property.

Upon first discovery of the structure, the Bostocks had their daughter-in-law take pictures. They posted the photos to social media where it started to gain interest from experts and curious minds alike.

Social media brought the structure made of teeth to the attention of a local historian and National Trust worker. They came out to inspect the building, and both parties were equally in awe of its craftsmanship.

The structure is 12 ft and made of brick. It is intricately decorated with sea shells and the teeth and bones of sheep and cows. Experts suspect that teeth and bones were used because they were easily found in the area.

Bostock’s back yard folly in leafy Edgbaston, Birmingham, is just half a mile away from one of the city’s most famous landmarks Perrott’s Folly. J.R.R. Tolkien was said to have drawn inspiration from Perrott’s Folly when writing The Lord of the Rings trilogy.

A National Trust spokesperson commented on such findings, “Even in the gardens of the National Trust we have many unanswered questions, many garden features, including follies, that are long lost and known about only in letters and sketches. Follies and grottoes capture the imagination of all our gardeners and visitors, they were about pleasure, fun, secrecy and surprise.”

John put the house up for sale without knowing of the folly’s existence. He thinks it’s an amazing discovery and may have kept the property had he known. It’s not every day you find a piece of history in a structure made of teeth.

He believes the new owners will continue to take good care of it.

Rob Zombie Shares Mockingbird Lane Blueprints for His “The Munsters”