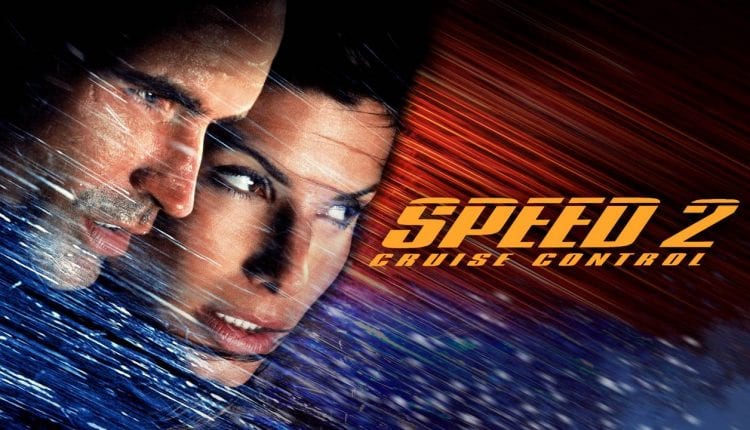 Every time I set out to write one of these series reviews, I think to myself there’s no possible way it can get any worse. And then I watch something like “Speed 2: Cruise Control” and realize that the barrel of bad movies is deeper than I could have ever imagined. I remember always feeling like this was a bad movie simply by its title, and if memory serves I may have even watched it in theaters. “Speed 2” is a prime example of good creators getting bad ideas greenlit because the studio only saw dollar signs from the success of its predecessor.

Somehow, the only person who made the right decision here is Keanu Reeves. I’m not blind as to why it was made and why people thought it was a good idea, either. I get it. This is EXACTLY how sequels go so wrong so often and yet another example of Hollywood refusing to learn from their mistakes, spending a boatload (pun intended) of money on a sequel no one asked for only to lose it all because the original was never made to be a franchise in the first place.

“Speed 2” suffers from more than all that, though. It is proof that the “Die Hard” formula needs more than just its basic format to work. Simply have the base action outline on paper simply isn’t enough to make a good movie, and no amount of rinse and repeat can change that. It is also proof that even then, in a pre John Wick world, Keanu Reeves was far more compelling as lead action star than Jason Patric (“Lost Boys“). That’s not a slight on Patric, either. He’s wildly miscast and written in an even less compelling way.

Nevertheless, Reeves absence is absolutely felt, and Sandra Bullock is not enough to carry the “franchise” along on her own. See, “Speed” not only had Reeves, but he and Bullock also shared unforced chemistry onscreen. “Speed” may be ridiculous, good old fashion, physics defying action, but the actors sell it all to us because they aren’t asked to sell themselves as believable people. “Speed 2” on the other hand, forces its actors to sell us a script they know is garbage, dialogue they know people don’t actually say, and characters they know don’t even make sense on paper let alone are suppose to have some kind of romantic relationship that serves as a catalyst for the film.

I guess we can put most of the blame on the script, which deserves more of the ire than almost anything else that came together to make “Speed 2” a reality we have to live with. But before we get to that, we have to talk about Jan De Bont, who is as much to blame as the studio that let him make a sequel to a movie that didn’t need one. You may think this is being unfair and that he’s just collecting a check and therefore making the film is excusable, but that’s not what happened here. De Bont directed “Speed” in 1994, one of the best “Die Hard on a Bus” action films of the 90s. He then followed it up with “Twister” two years later in 1996, an absolute classic 90s disaster film (review here). This man had made two gangbuster blockbusters back to back, so of course the studio literally handed him the keys to the kingdom. De Bont could have literally made anything he wanted; some indie passion project, another major blockbuster to keep the streak going, anything. But no. This twat decides to make “Speed 2: Cruise Control” because he had a fucking dream about a boat crashing into an island.

So no, De Bont does NOT get a pass for “Speed 2.” This is as much his fault as the studio who said yes and the writer who thought “You know what’s even more intense than a bus racing down LA Freeways? A big, giant, cruise ship. You know, those slow moving behemoths that are basically floating cities? That top out at about 14 knots an hour? Now THAT’s speed baby!” Given that Jeff Nathanson penned this floating turd, this pitch is probably not too far off. De Bont was probably sitting in the back of the office going, “just make sure it all crashes into an island.” Nathanson is ALSO responsible for “Indiana Jones and Kingdom of the Crystal Skull” and “Pirates of the Carribean: Dead Man Tell No Tells” so terrible sequels to movies that don’t need them are kind of his forte. I know this point feels like a broken record, but it is consistently the thing that separates good, dumb films from bad, dumb ones.

I Watched “Dune” Without Knowing Anything About…

“Speed” works because the script is tight, concise, and owns everything in it with a straight face. “Speed 2” on the other hand is messy, contrived, disjointed, and just downright boring. Hell, we don’t even get to the whole “we can’t stop the boat” until about an hour into this VERY long two hour movie. The entire first act of the film is basically a romcom trying to sell us the idea that Annie (Bullock) is happier with Alex (Patric), desperately trying to explain why Reeves isn’t here despite Alex basically being Jack Travern light. Even William Dafoe hamming it up as the villain doesn’t help because nothing about his character or motivations are ever clear or make any sense. Dennis Hopper‘s Payne in “Speed” is a simple, smart, motivated villain; ex cop gets injured, feels slighted, takes it out on the current ones for the money he deserves. It’s simple and effective. “Speed 2” can’t even be bothered to show us why Geiger (Dafoe) has a beef with Alex (Patric). They just kind of identify each other on the ship, have some expository dialogue completely irrelevant to what’s happening and then they move on and never talk about it again.

“Speed 2” abandons anything and everything that made its predecessor such a solid action flick. It literally blows through money without any regard for story or purpose, resulting is giant set pieces that are as wasteful and pointless as the film itself. There is quite literally nothing exciting or thrilling about “Speed 2,” and every actor is worse than they’ve ever been. I know this is hard to hear, but sometimes a good, successful movie can be JUST that. Sometimes things simply don’t need sequels, and “Speed 2” is a masterclass in what happens when keeping it sequel goes wrong. It is among one of the worst films ever made, and has made the top 10 worst sequels ever made on just about every single critical list that matters. Whatever you think you remember about “Speed 2,” it’s probably something you remember from “Speed” and you’re inadvertently mixing them up. There is NOTHING memorable about “Speed 2.” I literally just finished it and couldn’t even tell you what it’s about and can only recount who’s in it because I know damn well they all regret it.

Like so many bad sequels that make this unfortunate list, “Speed 2” is deserves every bad word ever said about it, and while it holds a 4% on Rotten Tomatoes, it too can make the case for 0%. Personally, I blame Roger Ebert, who gave the films two thumbs up and spent years defending his review of “Speed 2,” and I can only assume that 4% is all him. This is tough for me because I actually really appreciate the late Ebert as a great reviewer, but here he’s wrong and we can fight about it in the afterlife.

On second thought, the idea of this film following anyone into eternity other than hell is the last thing I would wish for myself or anyone for that matter. The point is “Speed 2: Cruise Control” is as terrible as you think you remember it being and can’t stress enough how much you should never, ever, watch it again.

Charge Phones Faster with this Sonic The Hedgehog Mat!

The Most Magical Black Fae Day: Faes and More!