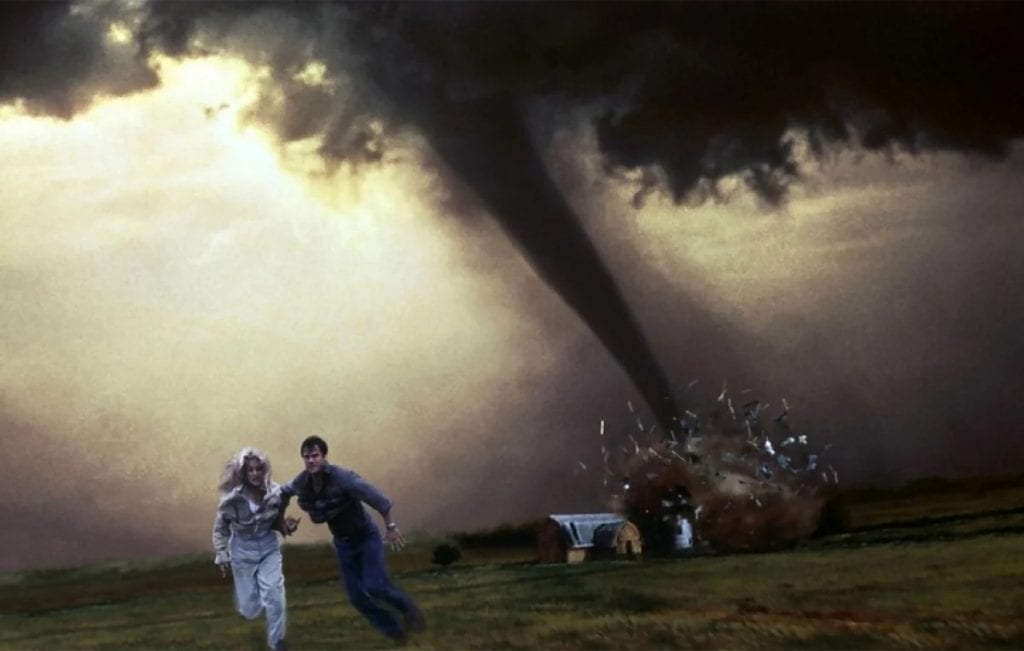 I know I say this a lot, but some movies just scream their era. Some exist in a vacuum of cultural zeitgeist that not only captures the very essence of their time, but is also the key to its longevity. “Twister” is so perfectly 90s it’s kind of ridiculous. While disaster films have long been a staple of escapism through film, THIS one not only has a die hard cult following (playing just about every week on cable networks), but has just the right amount of absolute absurdity that could only exist in 1996. And I am I completely, unapologetically here for all of it.

I’m not even going to pretend like I don’t love every dumb thing about “Twister.” The cast, the silly banter, the arrogant Cary Elwes villain, and yes, even the absolutely batshit crazy no way in hell that would ever work physics defying leather belt strapped to a pipe saving our heroes in the eye of a tornado. This isn’t a good movie by any stretch, and can be picked apart with even the smallest bit of scrutiny. But, “Twister” is also damn good fun, wholly defined by the 90s era it exists in and a damn near perfect escape from life, which at its core is what film as a medium is all about.

Let’s not waste time explaining the plot of “Twister,” which seems like a pointless exercise for anyone 30 years old and up. The cliff notes: storm chasers follow tornados in hopes to understand them better and further research to predict them. They’re all quirky, weird, and of course in love with each other, and their histories and love triangle spill out over the film as tornadoes whisk about with greater and greater intensity.

Science? meaningless. Physics? Throw that all the way out the window. Basic logic and any kind of plausible events? Put that baby to bed right now. For all its posturing, “Twister” has no intention of making any sense or every attempts to maintain any kind of storm or scientific accuracy. All we need to know is nothing. Check logic at the door and enjoy these wacky characters track down storms that don’t actually exist. It’s worth doing this, because “Twister” is far more concerned with the fun of it all than it is with trying to make any sense.

I don’t think anyone should be surprised that the film was written by Michael Crichton, an author and screenplay writer who absolutely LOVES science defying disasters. It was also directed by Jan De Bont, who also directed “Speed” two years prior. Steven Spielberg serving as an executive producer, for goodness sake.

And the cast, truly an all-star who’s who of the 90s: Bill Paxton, Helen Hunt, Phillip Seymour Hoffman, Alan Ruck, Jami Gertz, and cameos by Anthony Rapp and good old Jake Busey. Just on paper alone, it’s no wonder it was ranked #2 as the highest grossing film of 1996 and still cracks the top 100 of highest grossing films in North America. There is something truly endearing about a film like “Twister” that embraces its silliness with open arms, owning its loud, dumb, and ridiculous premise and plot so fully it almost dares viewers to question it. The only question is who needs answers when you’re having this much fun?

This comes through with its cast as well, with just about everyone operating on the same level of humor and enjoyment as the film asks for. “Twister” works because it’s cast owns the silliness as much as the film itself, with no one pretending as if they’re trying to make something out of nothing. This only adds to the enjoyment of the film, with everyone able to play it as straight as possible while watching cows float by their windshield and crack jokes about it as they drive a truck straight through a tornado. We know it’s not real, they know it’s not real, and the filmmakers are purposefully creating a world that isn’t real, and with everything and everyone on the same page, “Twister” makes it incredibly easy to turn off your mind, sit back and enjoy the show. This kind of escapist thrills is also what lends itself to just how the film has stood as a favorite among many for 2 and half decades.

I’d be remised if I didn’t at least mention the absolute fire 90s soundtrack of “Twister.” This is something that really has been lost with films in the 21st century. No one really makes the music a character in their story anymore, or at least not as often as mid 90s action films. “Twister” sports a killer soundtrack with the likes of KD Lang, Tori Amos, Soul Asylum, Goo Goo Dolls, Red Hot Chilli Peppers, even Van Halen shows up on this thing. It’s not quite the workout playlist of “Mortal Kombat,” but it captures the 90s indie rock scene with near perfection. It sparks the same nostalgia as the film does, and you really can’t have one without the other.

There’s honestly not a whole lot else to say about “Twister,” as I’ve made it pretty clear that it’s a big guilty pleasure of mine and all of its faults can be explained away as being intentional. Yes, even the ridiculous F5 twister being bested by a metal pipe and a leather belt. It doesn’t make sense because it’s not suppose to; everyone involved knows it’s silly, and they want you to know it too and enjoy it with them. The less you think about it, the more enjoyable it becomes. The characters are over the top archetypes, the plot is nonsensical at the best of times and the science it all but non existent. And yet, despite ALL of that, “Twister” is just a damn good time at the movies.

So yeah, I love “Twister.” Always have, always will. You don’t have to and I won’t make any effort to convince you that it’s a good movie. It’s not, and you’re forgiven if it’s all a bit too ridiculous for your liking. But I promise you, “Twister” is better if you just let it sweep you up and carry your house across the farmlands of middle America.

And look, there are rumors that a reboot is coming soon with Frank Marshall producing and Joseph Kosinski (“Top Gun: Maverick“) set to direct. So if nothing else- please preserve our beloved 90s history and watch the original film first.

The last thing we need is ANOTHER “Twister,” and I know for certain it won’t be the same one.