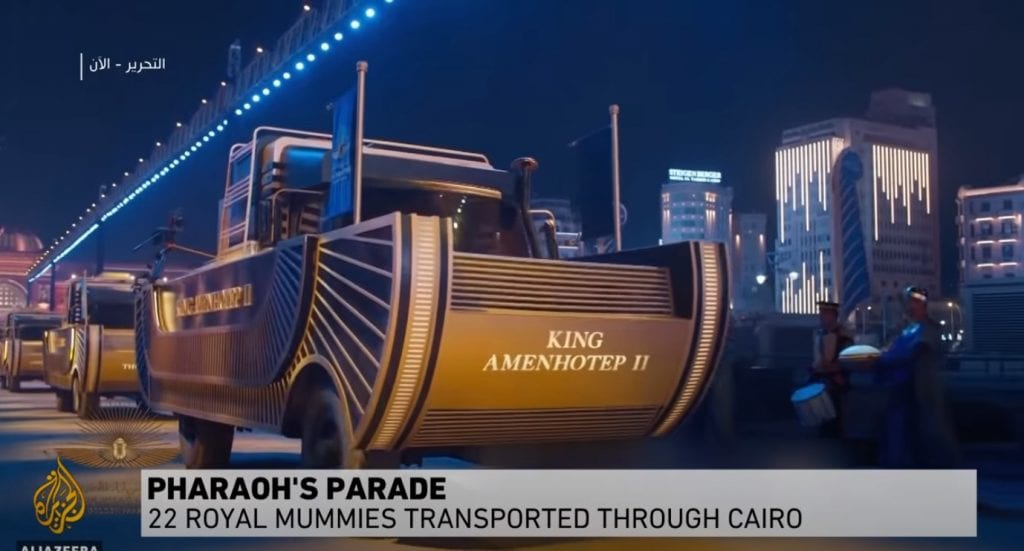 In an effort to keep Egypt’s mummies even more safe from decomposition, several were relocated to a new high tech facility. The new facility will keep them on display where they will be secure from bacteria, bugs and fungi. The parade was organized by the Egyptian Ministry of Tourism and Antiquities.

22 mummies were transported 45 minutes away from their decades-long residence at the Egyptian Museum in Tahrir Square. Their new permanent home will be the National Museum of Egyptian Civilization in Egypt’s first Islamic capital, Al-Fustat.

Upon arrival at their new home a ceremonial 21-gun salute was performed. They were also greeted by a concert from the Cairo Philharmonic, and then received by the Egyptian President Abdel Fattah Al-Sisi.

22 royal mummies were moved along with 17 royal sarcophagi. Their effects and things that were discovered alongside them were also relocated. It was a multimillion-dollar spectacle of the 18 kings and four queens making the journey through Cairo in the highly anticipated Pharaoh’s Golden Parade.

The entire parade was like something you would see out of a movie. Something that would be put in place so that the curses on the tombs wouldn’t be released when they were relocated. The proceedings were absolutely beautiful, and the Egyptian Ministry of Tourism and Antiquities did an amazing job putting on a show for the people. And if the pharaohs were watching from up above hopefully they were impressed too.

The place they are now will have them on display alongside their CT scans which reveal what is beneath the wraps, and sometimes any breaks in bones or diseases that afflicted the royals.