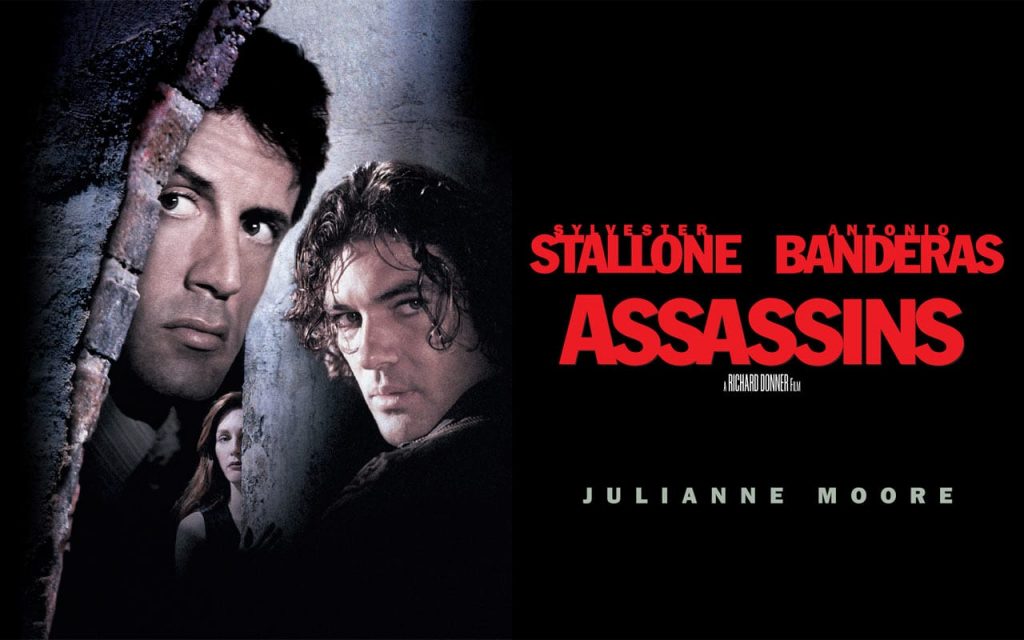 It may come as a surprise, but there was a time when October was not a month-long Halloween celebration at the movies. As it turns out, 1995 only had one horror/comedy film released during Halloween season.  “Assassins” is obviously not it, but it was released in October nonetheless.

The action thriller harkens back to a simpler time of filmmaking, one where movies could just exist on the thinnest of premises and still be a vehicle for action stars.  On paper, “Assassins” feels like half a pitch that was given the greenlight prematurely and the rest was made up on the fly.  While it isn’t nearly as bad as it’s description (and critics) would have you believe, it is elevated by a singular performance and not much else.  While there’s a lot of fun to be had, it really is a mess of a film that, if not for Antonio Banderas, doesn’t have staying power beyond a first watch.

Directed by Richard Donner and written by the Wachowskis, “Assassins” follows Robert Rath, a paid assassin regarded as the best of the best at the end of his long career.  He wants to retire and his haunted by a job where he had to take out his own mentor years ago.  On a final assignment, as mysterious new assassin gets to the mark before he does.  To leave it all behind him, Rath takes one last job to take out a computer hacker by the name of Electra.  Things go wrong when Miguel shows up again, and Rath soon discovers that everything is not as it seems and his past may be catching up to him.

Donner has far more hits on his resume than misses, and “Assassins” feels like it belongs on that short list.  It is also shocking that this is first feature film project from the Wachowskis, who of course 3 years later gave us “The Matrix” and changed the action sci-fi genre forever.

There is nothing new here, and everything from the muddled plot and ill paced direction drags the film down despite the talent behind the screen.  It is a by the book, cat and mouse action thriller, all the way down to the “Save the girl, find the doohickey” and “killer with a heart of gold” tropes.

It almost feels wrong to be so critical of “Assassins” because, despite all its flaws, I still genuinely enjoy the film.  It is everything you would expect from a mid 90s action film, both the good and the bad that comes with that time in cinema.

While there is plenty of blame to go around when it comes to what makes it ultimately fail, what makes it work, singlehandedly, is Antonio Banderas (Miguel Bane).

Credit to Donner for letting Banderas run with is eccentric ideas, because it’s just about the only thing in “Assassins” that works.  He is perfect; charming, wild, and over the top in every single moment, chewing through scenery and outshine every single actor that has the misfortune of sharing the screen with him.

Sylvester Stallone (Rath) is probably the most wooden he’s ever been, phoning it in more than usual.  Even if his stoicism was a choice, it’s a poor one.  He is so uninteresting the viewer is constantly forced to root for Miguel and having a complete disregard for Rath to survive or even achieve whatever it is he’s trying to do.  It’s not unusual for an antagonist to outshine their hero, but the imbalance is like an exploding star.

Even Julianne Moore– an accomplished and capable actress- falls flat here, deciding to channel her Stallone of stoicism instead of Banderas’ manic creativity.

Make no mistake, “Assassins” is Antonio Banderas’ movie, regardless of intention by anyone else involved to make anything other than that.  Without him, there is nothing left but a collection of pointless scenes no one, not even the remaining cast, really care about.

It seems unfair to have such harsh words towards a film that truly isn’t attempting to be anything other than what it is.  At its core, it’s a Stallone action vehicle made to capitalize on his star power at that time.  To that extent, it achieves its goal.  But the flare that Banderas brings to “Assassins” shows viewers what the film could be if it wasn’t bogged down by its tropes and run of the mill action.  His performance cannot be overstated.  One can’t help but wonder what could happen if the film focused solely on the cat and mouse game between the two assassins, eliminating the entire Electra (Moore) subplot and forcing Stallone to match Banderas’ energy.  There is a great movie in here somewhere, one with a lot of fun to be had.  Unfortunately, you have to sit through long periods of time without Banderas.

“Assassins” is inexplicably tied to the terrific performance of Antonio Banderas.  He unequivocally makes the film, and there is very little left without him.  For that alone, it is worth a watch.  Even if everything else is subpar at best, “Assassins” is a Banderas vehicle hidden underneath a lackluster Stallone one.  For plain and simply fun and enjoyment, that is enough.