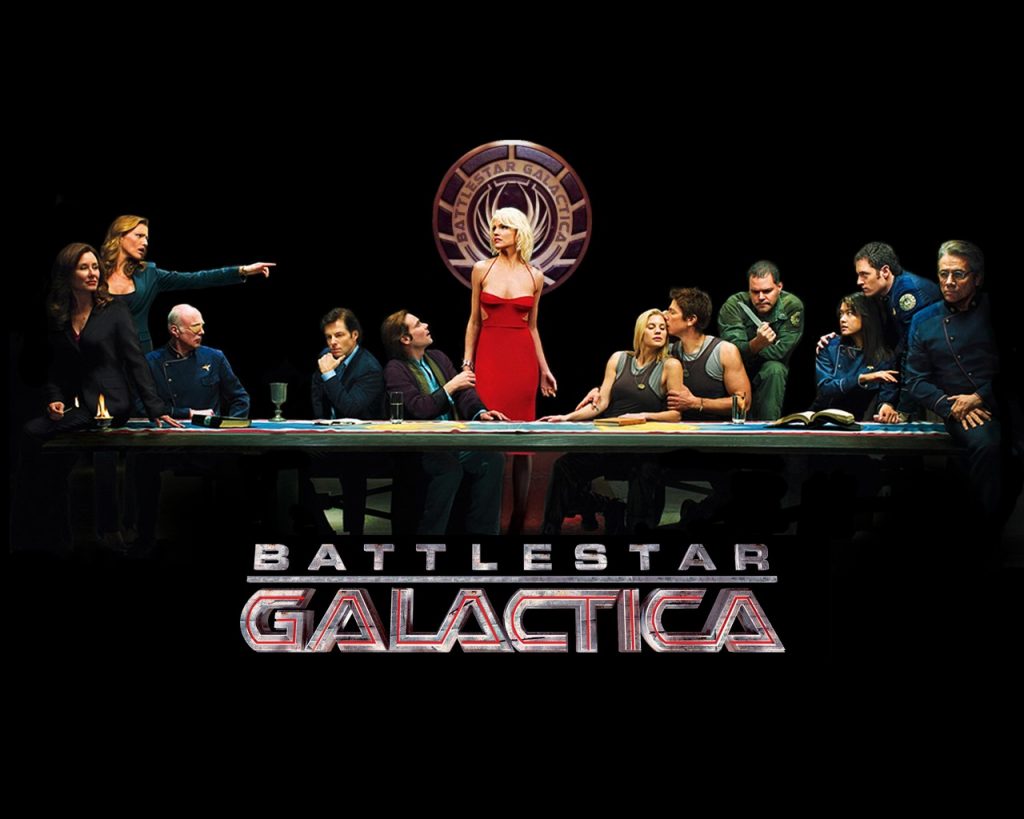 Sam Esmail’s “Battlestar Galactica” Reboot: We Have Some Concerns

For fans of reimagined science fiction series “Battlestar Galactica,” the last year has been weird. Rumors have swirled often enough about some kind of reboot (or in this case, a story within the same universe) happening- remember when it was going to be with Bryan Singer? *shudders* Man, we dodged that pile of crap. But something, at some point, caught the attention of parent company NBC Universal, and a deal with “Mr. Robot” creator Sam Esmail was struck for more BSG.

“I’m a huge fan of Ronald Moore‘s Battlestar, but I don’t know if I’m great at hard sci-fi like that,” Esmail recently told The Hollywood Reporter in an interview. “I love it. I’m a fan of it.”

That sounds….promising enough I guess, but then why touch it at all? Why not let one of the most successful rebooted tv series enjoy it’s history, 13 years later?

“One of the reasons I even wanted to do Battlestar, was that the way Ron Moore [Ronald D. Moore], what he did with his remake in the early 2000s where it was this sort of hard sci-fi series with lots of action set pieces and really this exciting sci-fi adventure but purely grounded in an allegory of what was going on at the time, which was post-9/11. And it wasn’t that subtle, the links, I would say. But because he was also attuned to the sci-fi nature of the show, you didn’t feel it.

When I was approached to do Battlestar now, it has to have that same sort of dynamic. It can’t be just a retread of what he already did so masterfully back then. What are we saying about today’s world?”

Okay, sure. But we all know a series gets so much of it’s OOMPTH from it’s head writer, from the direction of a story.

“I knew early on that we were going to have to bring somebody in to run the room and to write the scripts,” Esmail says about bringing in Michael Lesslie. “He’s just a fantastic writer. I loved his series, Little Drummer Girl. And Mike just had this great take, and I’m not going to go into it because obviously, I don’t want to spoil it for fans, but you kind of see it a little bit in Little Drummer Girl where politics plays a big part in it but without compromising the entertainment value, because in my opinion, you’ve got to have that. That’s number one priority. I want people to be excited and emotionally invested and on a thrill-ride but at the same time I think Mike is going to bring a lot of depth and sort of parallel and mirror what’s going on in the world right now.”

Ok so…as a HUGE fan of Ron Moore’s BSG, I have some issues with that statement. Alluding that the reimagined series DOESN’T have a very special blend of politics (between the military, civilians, and religion) at the core of each season just isn’t fair. Nor is the assumption that fans weren’t emotionally invested?

Ugh. This is way not what I want to hear about this reboot, especially after Esmail’s attempt to quell concerns with a tweet. Which kind of…doesn’t go in line with what he’s saying in this interview.

“There might be episodes that are longer than others. There might be a three-episode arc. There might be a standalone episode that’s a half-hour long. We don’t want to put guardrails up at all. We want to do whatever’s best for each episode. And because I do believe in the episode model, I maybe share the frustration some critics have when showrunners go on an say ‘Well, it’s a 10-hour movie.’ That’s silly. It’s not. What we’re doing here is every episode you have the opportunity to change up the tone, to change up the story, to change up the point of view. So we’re going to lean into that, not shy away from it.”

I really do feel like this is someone who looked at a property already held to a standard of greatness, and said somewhat arrogantly, “I can do it differently, and better.”

I would love to be wrong about this. I would absolutely love this story to honor RDM’s version, to honor Glen Larson‘s original legacy, and find something NEW to say within the galaxy. I’ve seen other fans say this could be like “Star Trek: Discovery” in a way- building a new story within the existing timeline. But….we all know how that turned out. Rough, slow to get going, and highly divisive within the community that should be the loudest supporters. Thankfully, DISCO has turned into something worthwhile, but only when it moved away from the constraints of the shoes it was trying to stuff itself into.

But then again, science fiction fans are always the hardest to please with their constant balance of “there isn’t enough sci-fi on tv” when the airwaves are bereft, to “there’s too much sci-fi on tv” when a new show is announced that they don’t like the sound of.

This new version of “Battlestar Galactica” is set to find it’s home on NBC’s streaming service, Peacock. The writer’s room is reportedly in full-swing, but no word on production start or casting yet.

We’ll let you know what we hear [nothing but the rain].

So Say We All.