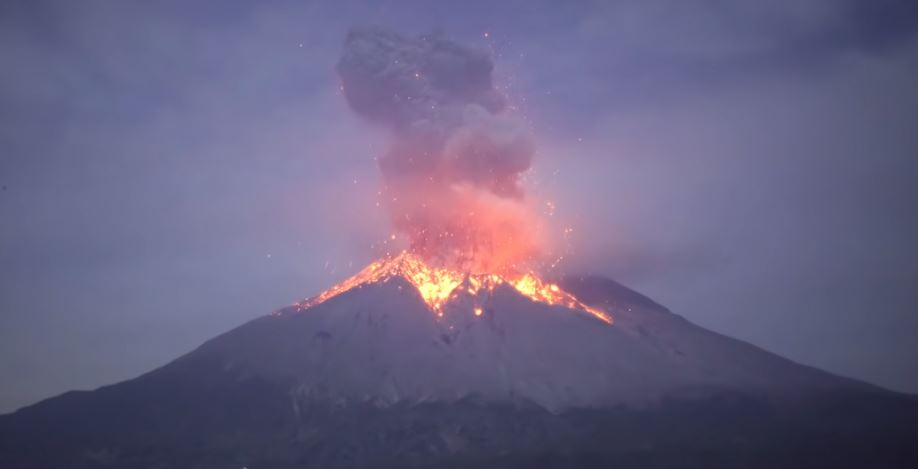 Back in November of 2019, Mount Sakurajima experienced a series of eruptions from the 6th to the 12th.  On the 12th, a photographer managed to get a very amazing video of the eruption.

The video shows how the existing ash plume becomes suddenly lit with red, and eventually the plume is engulfed in the bright orange glow of lava exploding out.  Lightning is striking around it and you can see parts of the stratovolcano lit up as lava comes flowing from pyroclastic vents.  A very full rushing of lava comes from the summit, and it almost looks like it’s just going to keep rolling down the mountainside, but after a moment it sort of stops, parts of it still glowing.  The audio isn’t super clear, but you can definitely hear the muffled sound of the explosions in the distance.  From the looks of it, the lava cools, causing the flow down the rock to slow, and the ash cloud grows ever higher.  It’s really quite amazing to watch in real time.

Mount Sakurajima is located on what was once an island, but after an eruption in 1914, the lava flow connected it to the Ōsumi Peninsula.  The eruption on the 12th was not necessarily the largest or most catastrophic that Sakurajima has been capable of, but it marks its most recent eruption.  It erupts very regularly, and it’s also Japan’s most active volcano.  It’s located in Kagoshima Bay and has three summits.  The summit Kita-dake used to be the main eruption site, but about 4850 years ago the vent shifted over to the other summit, Minami-dake; this is where its more modern eruptions occur from.  In 2006 it shifted to the Showa Crater, which is just east of Minami-dake.

Its activity suggests that most of its eruptions only affect the summit area, but larger, more catastrophic eruptions have occurred several times throughout recorded history (the last one being the one that connected the island to the peninsula).  Several earthquakes days prior warned the residents at the time that an eruption was coming, so an evacuation had been put in place.  The lava flow lasted for a while, and it even shallowed out the bay quite a bit.

It has a fascinating connection to the ancient Aira caldera that collapsed around 22,000 years ago, creating the large area of the bay north of the volcano.  Sakurajima’s vent is connected to the activity from this caldera.  The volcano itself was formed from the caldera activity, and it first officially erupted in 963 AD.  In modern day, volcano research pays close attention to this volcano due to the fact that Kagoshima is very well populated, but they have put evacuation drills in place as well as having built shelters.

Sakurajima’s highest recorded ash plume was on August 18th, 2013.  The cloud of ash went up 5,000 meters and darkened the sky, also spewing a good deal of ash onto the city.  Otherwise, Sakurajima is a huge tourist attraction, with quite a few hot springs nearby as well as its own fascinating breed of the largest radishes in the world.