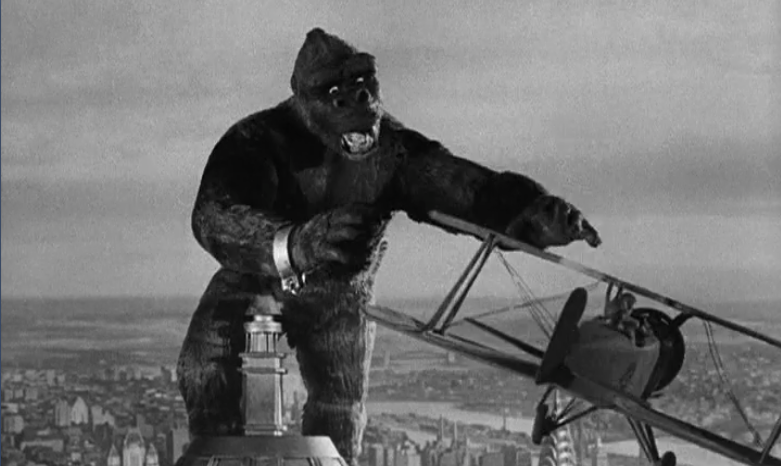 As part of its Big Screen Classics, TCM is bringing King Kong (1933) back to theaters for one day only – March 15. Created well before the advent of CGI (or even computers), the stop-motion animation used to bring the giant gorilla to life wowed audiences at the time and is still pretty cool today. Who hasn’t seen that iconic scene of King Kong atop the Empire State Building, swatting at attacking planes like they were annoying flies?

Stop-motion for the film was done by Willis O’Brien. Some critics have uncharitably suggested that the ape character is better than the live actors in the movie. Other revolutionary special effects used in the film included matte painting (for the background of Skull Island), rear projection, and miniatures. Rear projection was just one of the methods used to do the difficult task of combining the stop-motion animation with the live actors during filming. Unfortunately, no Oscar for visual effects existed at the time the movie was made (it was created in 1938) and the film received no Academy Award nominations.

King Kong starred Faye Wray as Anne Darrow, an actress and the object of obsession of the smitten Kong. Robert Armstrong starred as director Carl Denham, who captures Kong and brings him to New York to be exhibited as “The Eighth Wonder of the World”, and Bruce Cabot starred as Jack Driscoll, the love interest for Wray’s Anne Darrow and First Mate on the ship taking them to Skull Island to film a jungle picture. Anne Darrow is perhaps Wray’s most well-known role, although most clips of her from the film simply show her screaming. In fact, a contest to “scream like Fay Wray” was help for the 50th anniversary of the film. Wray signed up for the picture when she was told she would be acting with “the tallest, darkest leading man in Hollywood”, which she thought would be Cary Grant, not a giant ape!

Robert Armstrong returned as director Carl Denham in the direct sequel to the movie, Son of Kong (1933) released a few months later. In 1976, Dino De Laurentis released a remake of the film starring Jeff Bridges and Jessica Lange. That film had a 1986 sequel, King Kong Lives, starring Linda Hamilton and Brian Kerwin. Peter Jackson directed another remake of the film in 2005 that featured Jack Black, Adrien Brody, and Naomi Watts. Most recently, a film in the shared Monsterverse, Kong: Skull Island, was released in 2017. That film starred MCU alums Tom Hiddleston, Samual L. Jackson, and Brie Larson as well as John Goodman and the ubiquitous John C. Reilly.

Kong: Skull Island leads to an upcoming showdown between King Kong and Godzilla in the appropriately titled Godzilla vs Kong set to be released on November 20, 2020. It is unknown how the two giants, both portrayed as sort-of heroes in their respective films, will come into conflict. Some misunderstanding perhaps? After all, Batman vs Superman had the two DC comics heroes at odds with each other before teaming up to face a mutual foe. Perhaps Godzilla vs Kong will follow a similar plotline. Of course, this isn’t the first time the two monsters have faced off on film. Toho studios released King Kong vs Godzilla (and King Kong Escapes) in the early 1960s. Although there is some debate, most feel that King Kong was the winner of that first showdown.

Robert Armstrong played a similar character, showbiz entrepreneur Max O’Hara, in the King Kong-inspired movie Mighty Joe Young (1949). In that film, the giant ape Joe Young is not quite as big as Kong and is much more friendly, having formed a platonic friendship with the girl he grew up with, Jill Young (Terry Moore). Animation on Mighty Joe Young was done by O’Brien’s protege, the legendary Ray Harryhausen who has influenced many of today’s great filmmakers, including King Kong (2005) director Jackson. Mighty Joe Young was remade in 1998 with Charlize Theron as the gorilla’s friend. Another recent giant ape movie was Rampage (2018) starring Dwayne “The Rock” Johnson as a primatologist who forms a friendship with a white gorilla, George. In Rampage, the gorilla isn’t naturally large but instead grows and grows after exposure to a genetic experiment.

So enjoy a bit of classic cinema history, the film that launched the “giant monster” blockbusters, and see King Kong on the big screen where you can appreciate the size of this great ape!