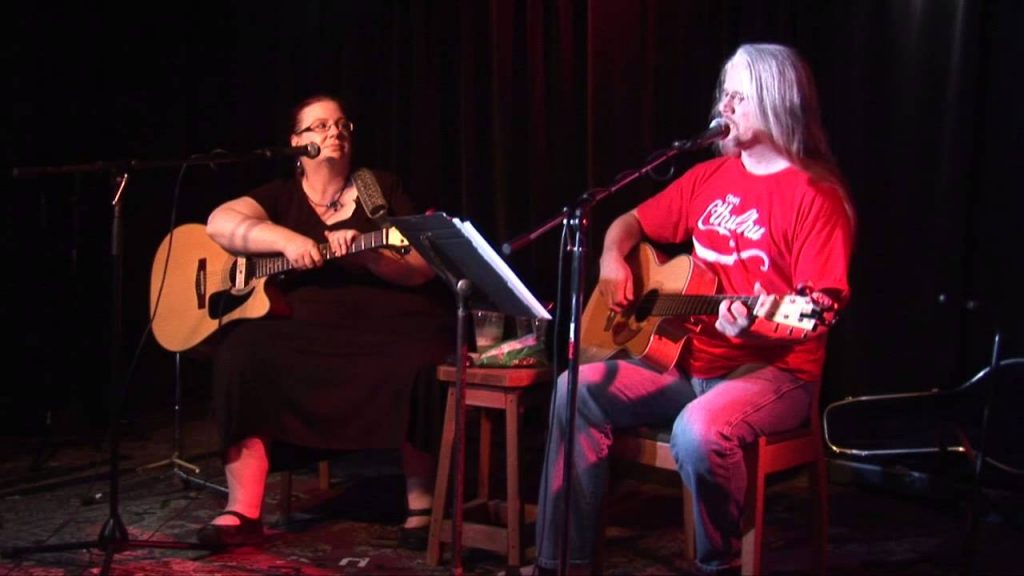 Every third Saturday at Lestat’s West, you can go see a fun music show by Eben Brooks and Allison Lonsdale as they play various geeky and nerdy songs.  Their acoustic music features folk songs and covers, all of them consisting of something geek related. Eben has a deep love for superheroes, comic books, and video games, and Allison delves into dark and twisted themes of Lovecraft and vampires, and spooky things all around.

Their folk songs are both parodies and original pieces, one of which is a song titled “Hey There Cthulhu” in the style of “Hey There Delilah”.  A few others are things like “LOL Together” (from the Beatles’ “Come Together”), and “It’s the End of the Verse as We Know It”, a song about Firefly; in one case, Eben has even done a parody of one of Allison’s originals “Whisky Jack” (his version being “The Grinning Joker”, a song from the viewpoint of Batman).  The duo’s original works are very different from each other, but both blend together in a show that will cover many fandoms.

Each month the show is themed differently to either go with the upcoming or current holidays, local conventions (the geek meter is off the charts during Comic con), birthdays, or whatever else they can think of.  For August of 2018 they featured a “Back to School” themed show; this year for August they played their “Greatest Hits” show. In more recent months they’ve occasionally been accompanied by a bassist by the name of Wolf Klauschie, an old friend of theirs.  In between songs you will also catch their witty banter, as well as occasional call outs from the crowd, many of whom have been watching their shows from the beginning and have raised their kids on the music. The show is live streamed on Eben’s YouTube channel for those who cannot make it to the venue that month.

You can see the Lonsdale and Brooks show at Lestat’s West in San Diego, CA, or you can catch the livestreams on the Eben Brooks YouTube channel.  The cover charge for the live show is whatever you can pay Louie the sound guy. Live shows are announced on their Facebook pages. They also have music available through CD Baby and iTunes.