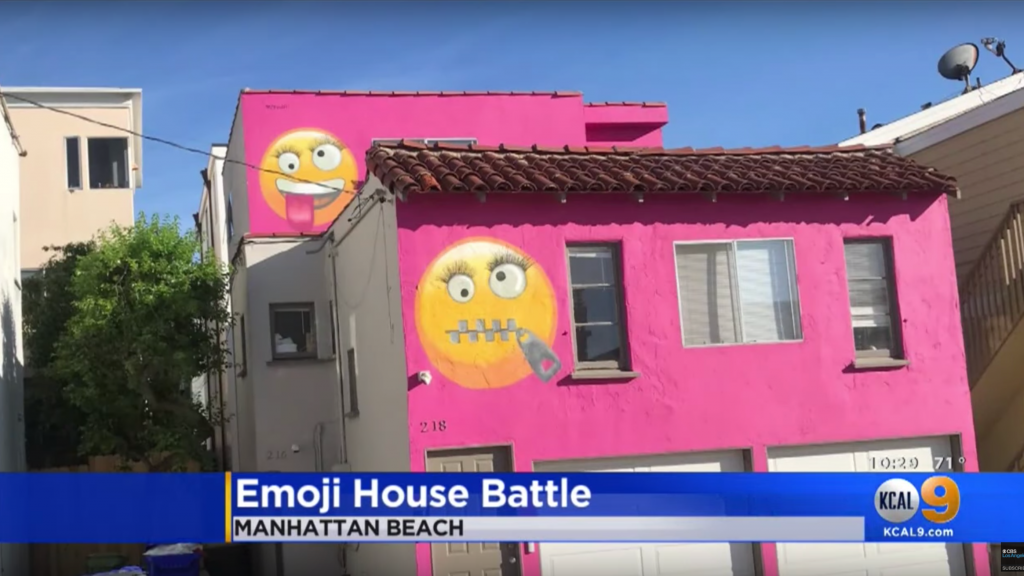 It would seem that Manhattan Beach has some rules that one home owner has retaliated against. Kathryn Kidd who was reported by neighbors initially because she was renting out her home for AirBnB purposes has decided to lash out by painting her home an obnoxious color with emoji’s mocking those who complained.

The two emojis are painted to have eyes looking in different directions and the first is a symbol for being goofy and the second is the emoji for “shut up”. The emoji’s are speculated to be a representation of Susan Wieland who says that she was wearing eyelash extensions one of the times she met with Kidd. She was also one of the complainants against her in the initial case.

The painter of the home seems to be getting a real kick out of all the press that the house has gotten.

What will be interesting in this case is the followup. Manhattan Beach does have an HOA that is handling the case however when Nerdbot reached out for a statement the listed phone line was immediately disconnected. Possibly due to the high frequency they are receiving calls due to this home.

Kathryn Kidd is laughing at the moment stating, “I think it’s cute and quirky and kind of funny,” she told the LA Times. Only time will tell what will happen to the Manhattan Beach home. Our guess is that they will order her to change it to a color that is approved of in the HOA handbook for the city.

What do you think of this house? Would you want to live next to it? Tell us in the comments what you think!