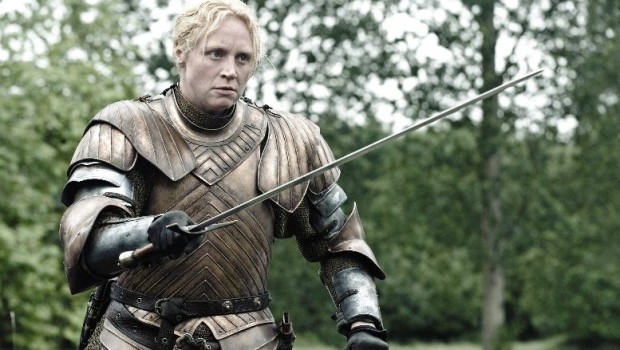 When you look at the cast of Game Of Thrones, just about every single person could be nominated for an Emmy Award. Even the dude who plays Podrick, I’d create a special category just for him. But unfortunately, even with a record breaking 32 nominations for HBO, there wasn’t room for everyone.

So what does one do when you’re definitely worthy of being nominated, only the network hasn’t submitted your name for consideration? You take matters into your own hands… just like Gwendoline Christie did.

You might know her as the ultimate badass Brienne Of Tarth. And when it comes to the Emmy’s, she is not messing around.

According to Yahoo.com, HBO actually didn’t submit Christie’s name to be considered for an Emmy nomination. And in being 100% worthy of said nomination, she simply said “screw it” I’ll just nominate myself… and it worked!

Yes, all she did was submit herself for the Best Supporting Actress In A Drama Series category and the Seven Gods answered her calls for recognition. Now Christie will be having her name read amongst other top tier television talent on the industry’s most coveted of evenings.

I hope she wins too. Brienne Of Tarth has been an under rated character on Game Of Thrones since she beat the hell out of the Knight Of Flowers back in season two.

And speaking of nominating yourself for an Emmy Award, I didn’t know you could do that. So I plan on nominating myself, for my nonexistent performance on Game Of Thrones… for next year.

Who would you nominate for an Emmy Award? Let Nerdbot know in the comments!!