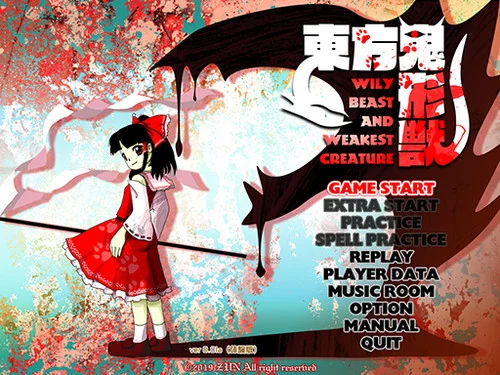 Hard to believe that 21 years ago I was introduced to a game called Touhou: Perfect Cherry Blossom. I can’t remember how my friend [John] found it, but all I know is, he showed me and boy was I hooked instantly. Basically it’s a shooter survival, one hit you’re dead, and you are given only three lives. You start off basically with a weak shot, but gradually you get more powerful. The game has a lot of memorable characters. And I mean A LOT of memorable characters. Heck I even cosplayed as Reimu (as the first N. American Touhou cosplayer) At Anime Expo 2006 (yes I am old).

Here’s a bit of gameplay of Perfect Cherry Blossom
https://www.youtube.com/watch?v=s3A8i2_-zHc

Recently ZUN announced its projects 17th game called Touhou Kikeijū: Wily Beast and Weakest Creature. ZUN explains that this game is a bit darker than his previous games, and that you do have the help of spirit animals. The new games demo launched on May 5th and ZUN has said that the new game will drop in time for Summer. Which leads me to believe that this game will be done in time for Japan’s Summer Comiket.

This is a game series that has thousands of fans worldwide. They has spawned fan made games and even anime series! I am excited to see the new game and play it, but I must wait patiently. Until then I will be playing PCB (Perfect Cherry Blossom) and Embodiment of the Scarlet Devil.

Check Out Our Interview With Herzog; A Great Band From The Great Lakes