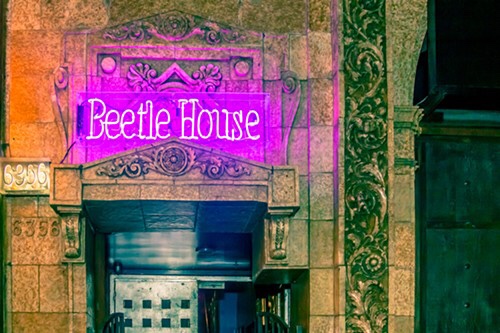 I Went To The Beetle House In Hollywood, And You Should Too

I know it’s a corny way to begin an article but after half a Big Fish Bowl (a strong adult beverage served in an actual fish bowl, with dry ice to create a smoky effect) it was a phrase I kept saying as if I was the first person to ever say such a clever play on words. By the way, I hope I’m not the first person to make that association. The name of the bar slash restaurant slash homage to the works of Tim Burton is Beetle House and it has the same amount of syllables as Beetlejuice. They’re practically handing you the joke. 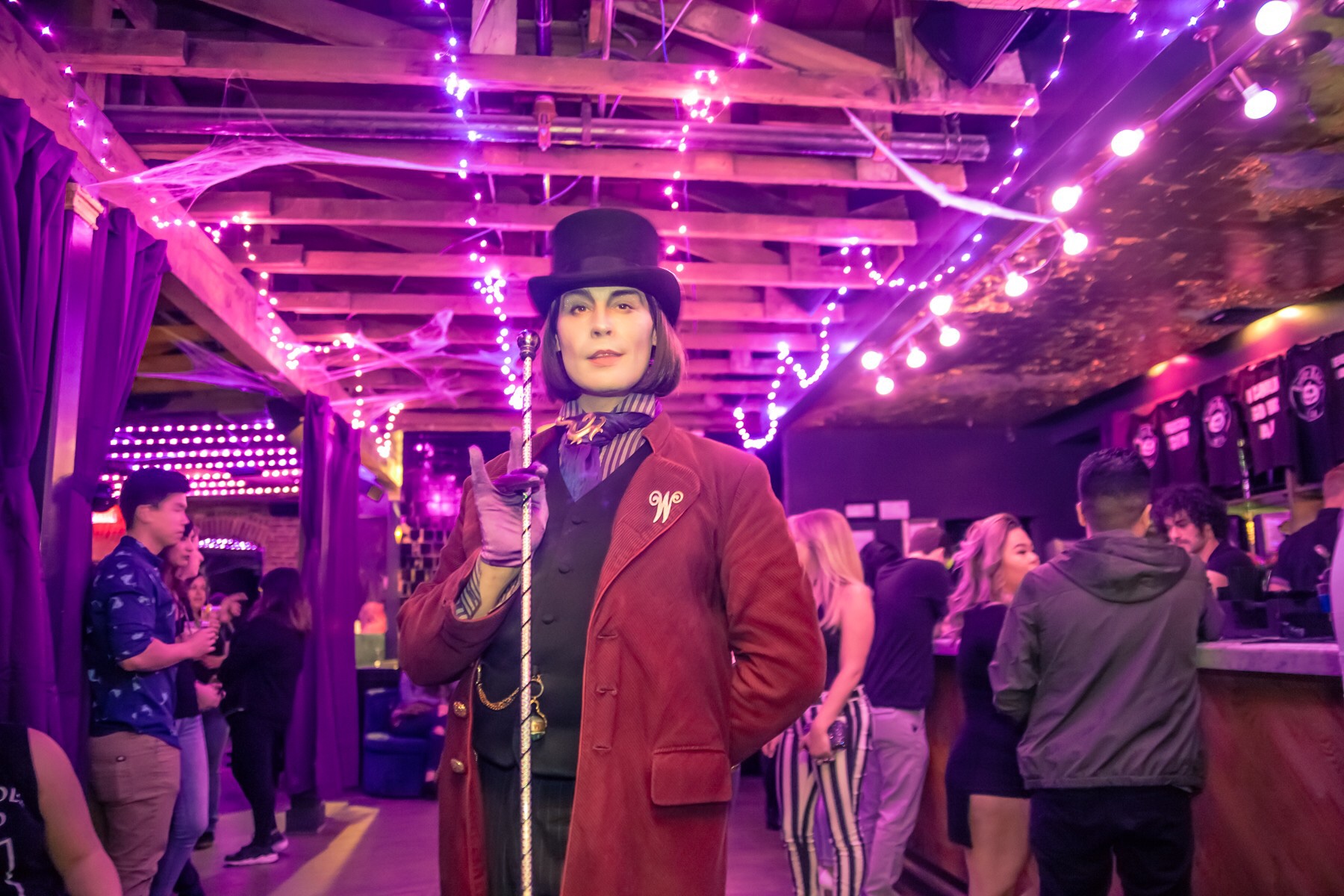 Anyway, let’s move forward beyond my desperate attempt for humor and discuss the Beetle House. Located on Hollywood Boulevard, a couple blocks west of Vine Street, a non-distinct illuminated purple sign hangs above the doorway. Almost like the place doesn’t want to be found yet groups of people stood outside waiting to get inside. I might add there was a line when we arrived and when we left so whatever the owners of Beetle House are doing, they are doing it right.

Even though there were people in line the place was not super crowded. This was good. Bars that serve only mixed, fancy, delicious cocktails need extra time to prepare such creations. It’s not like opening up beer after beer. These bartenders are artists and when a bunch of patrons are in need of service, it can take a little while longer to get drinks. Fortunately the establishment ran like a well oiled machine.

I will say this now, the service was fantastic. Staffed well, friendly, definitely on point.

So here’s how it works, Beetle House is divided into two sections. The bar, and the restaurant. The bar doesn’t require a reservation but the restaurant does. Of course you can just show up and wait for a table, but I recommend getting a reservation. Both basically feature a similar atmosphere if we’re talking aesthetics however the main difference is the restaurant offers entertainment. 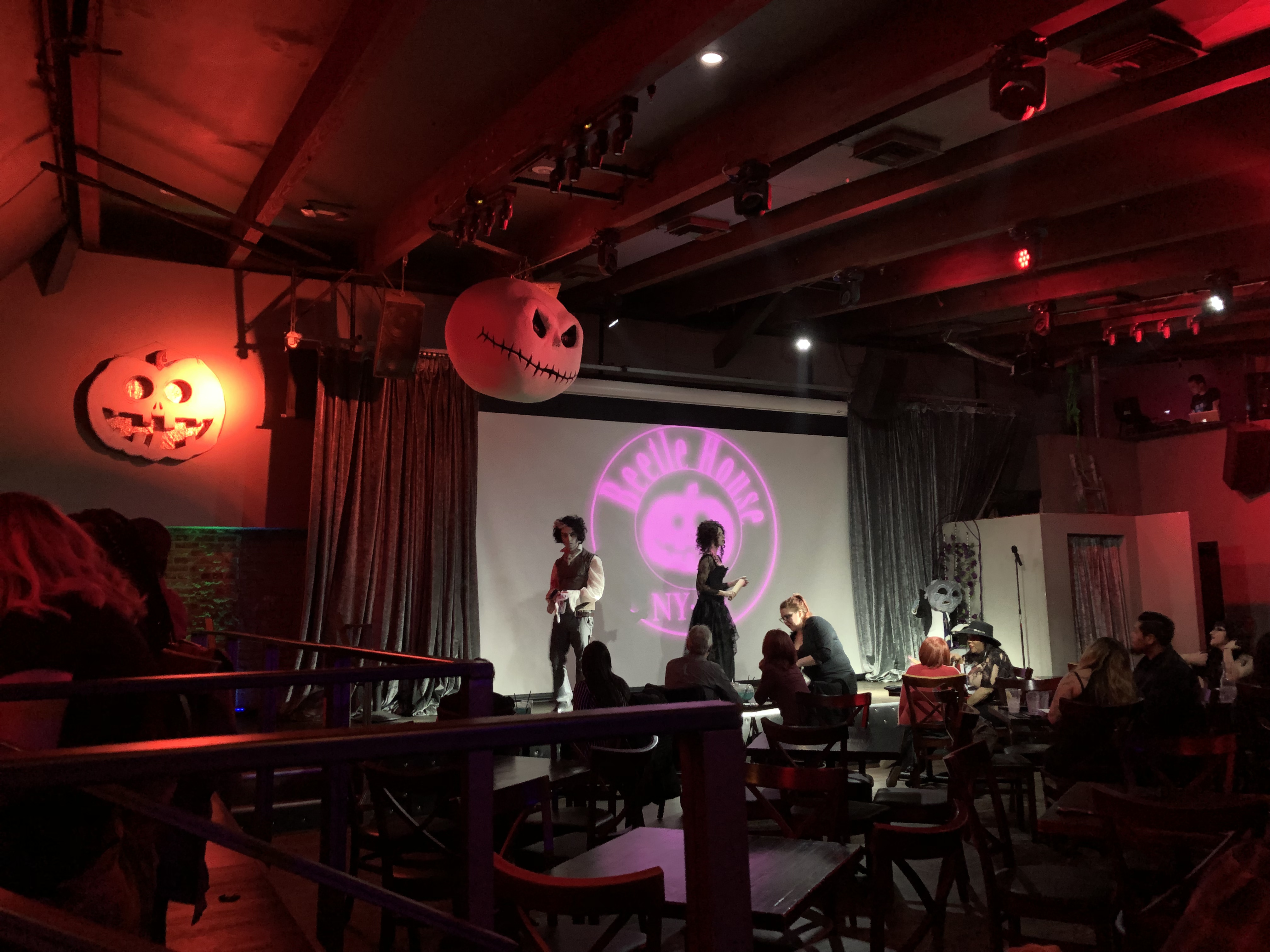 What seems like in between courses, characters from your favorite (or maybe not your favorite) Tim Burton titles wander through the room singing, cracking jokes, doing anything they can to make you smile. There was even a woman twirling fire sticks and this extremely skilled dude with a whip. When the performers are between sets, you can watch a collection of clips from TB’s films on an almost theater size screen behind the stage.

Interested in going to Beetle House yet? Believe me, I totally recommend it, however now comes the part of the article where I express my opinion on how to navigate the experience appropriately. 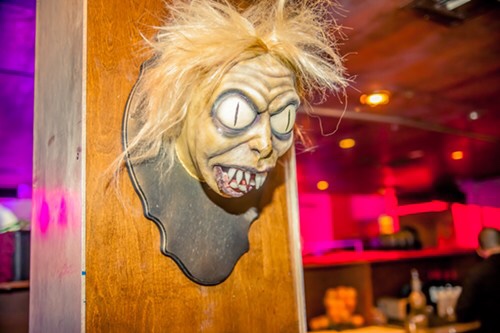 If you plan on going, and you should. Make a reservation in the restaurant but only have drinks. The reason for this is Beetle House does a fixed menu, where you pay a flat rate then get a three course meal. The cost is definitely reasonable, even for LA standards. Personally I feel the selection could have a touch more variety. Vegetarians beware there’s just a single entree option. Now what I’m about to say next I wouldn’t necessarily label a complaint but they really hook it up on the portions. A literal truck load of food. I was insanely full when I left the place.

Granted it’s a restaurant’s job to fill you up. I actually liked the burger I got yet I feel you could have the same experience and only go to Beetle House for drinks. If you’re hungry, by all means chow down but I cannot emphasize “hungry” enough.

Will I go back to Beetle House? Of course! Don’t let a small quam such as receiving too much food turn you off from a truly unique Tim Burton experience. I wish I could show you a bunch of photos but I feel you should just go there, see what I’ve been talking about for yourself. 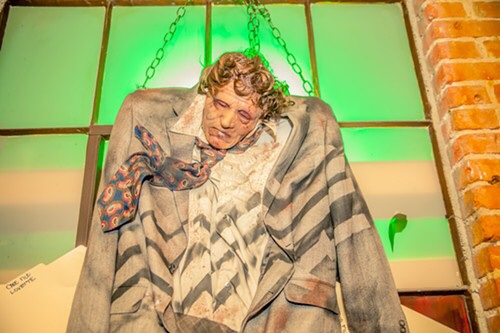 Beetle House is located at 6356 Hollywood Blvd in Los Angeles.

You can check out the menu by clicking here.

Have you been to Beetle House? Let Nerdbot know in the comments!!