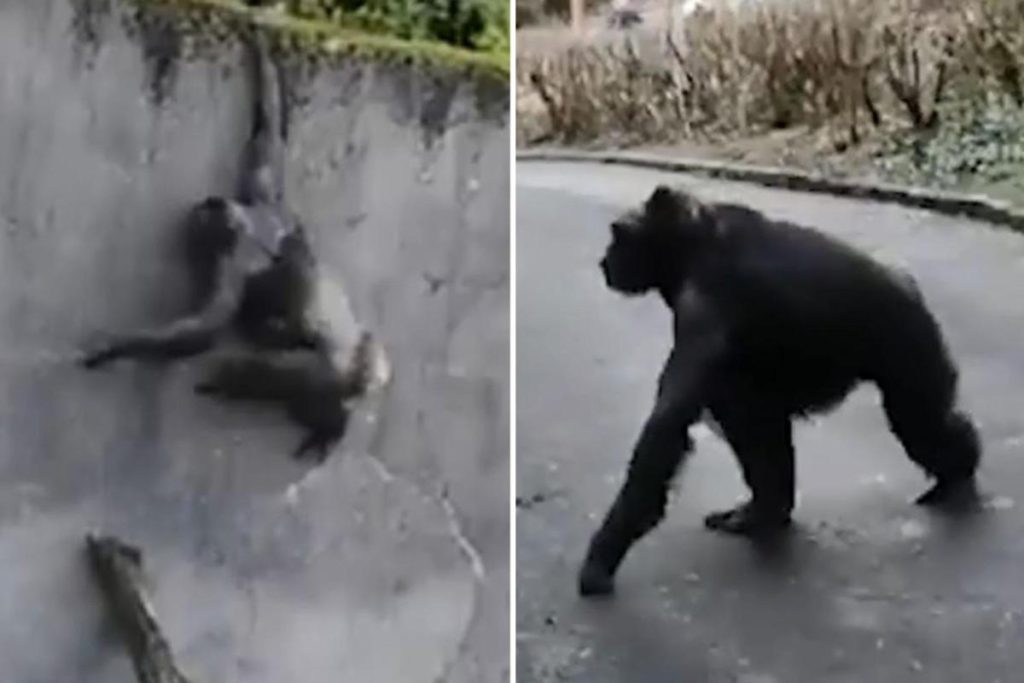 In the Belfast Zoo in Ireland there was a highly coordinated escape. Three Chimpanzees found a branch that had blown down after a storm and propped it up against their enclosure so that they could climb up and get out of their captivity.

In the video it shows one of the chimpanzees climbing up and over and then out of the enclosure onto a road. A little girl can be heard saying “it’s escaping” and “make the monkey go back”.

The Bellfast City Council said in a statement, “the animal was quickly returned to the rest of the group by zookeepers.”

The zookeepers got the chimpanzee back into the enclosure. Upon speculation that they should maybe re-evaluate how they keep the shrubbery in that specific environment they said that they would be considering changing it. They like to keep things natural for the animals at the zoo and that means many trees, bushes etc. However since the branch fell off due to a recent windstorm they are considering now replacing them with smaller trees.

This is the second escape that happened at the Bellfast Zoo this year. On January 27th a Red Panda had escaped. Police in the area warned locals to stay on the lookout for the animal which was found and returned to the zoo a day later.

I wondered exactly how common this occurrence is so I reached out to my friend Jenny Weldy, a Zoologist and former Birmingham Zoo Veterinary Technician.

Weldy said, “It’s very uncommon. Honolulu zoo had 2 hornbills escape due to a tree falling on the enclosure. Animal activists have gone in and stolen/ opened doors before from a few. But keepers train to help prevent things like this from happening. It is very uncommon, but has occurred. And usually it’s a freak accident or outdated enclosures.”

This can only mean one thing for the Bellfast Zoo. They have a mutiny on their hands and the animals are plotting against them. No but really though it’s probably time to rethink those enclosures.

What do you think of all this? Tell us in the comments!