Even Tokusatsu Heroes know the reason for the season!

Sure, they have their hands full fighting the forces of evil on Japanese TV screens every week. But that doesn’t stop them from diving headfirst and showing off their holiday spirit! Here are just five toku heroes who spread the Christmas cheer! 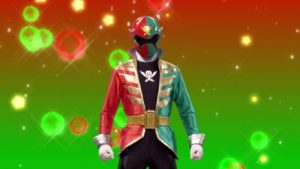 Sparkling and flashy, Gokai Christmas fights off the Zangyack Empire with the same glee as a kid on Christmas morning! 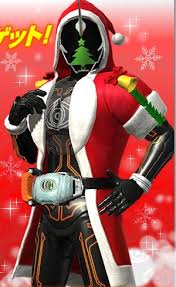 Merging with the souls of historical figures like Isaac Newton and Billy the Kid is really helpful when fighting Ganma monsters. But when Kamen Rider Ghost wants to spread Christmas cheer, he’s got to tap into the power of Jolly Ol’ Saint Nick himself!

Ghost’s Santa Damashii may have been an arcade game exclusive, but the form’s bell-adorned parka and evergreen face-plate make it a Christmas classic! 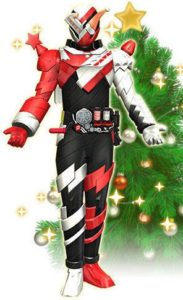 Kamen Rider Build is a scientist, constantly experimenting with the mysterious Full Bottles to see which ones match up. As it turns out, the Santa bottle and Cake bottle are a Best Match, giving Build his MerryChristmas Form!

Build is a self-proclaimed genius, too. So we should take his word for it that sweets go perfectly with the holidays! 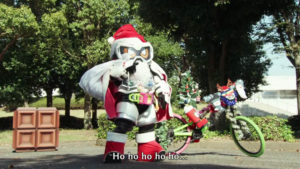 When video game doctor Kamen Rider Ex-Aid needs to teach a sick little boy the meaning of Christmas (and save him from a slug in a top hat), he uses a super rare power up: the Christmas Energy Item!

Ex-Aid’s Santa Action Gamer Lvl. 1 (a mouthful, I know) rocks out to “Jingle Bells” as he fights. But he has a few tricks up his sleeves…and his signature hammer in his sack of toys!

After fighting off the evil Debo YanaSanta, the samba-dancing Kyoryugers had one thing left to do to save Christmas: deliver the rest of the toys! And what better way to do that than in full Santa garb (plus one green raptor reindeer)?

Even their mecha Kyoryuzin got in on the holiday fun. After seeing this massive dino mech, Santa may want to trade in his sleigh!

What was your favorite tokusatsu Christmas episode? Let us know in the comments!