Nothing screams “Halloween” like a good old fashioned Monster Mash! These movies and shows managed to throw in every classic monster they could possibly fit! With creepy creatures like werewolves, vampires, and Frankenstein monsters crossing over, features like these raise the spook factor in a big way! So before you finish your Halloween movie marathon, take a look at our Top 5 Monster Mashes, starting with… 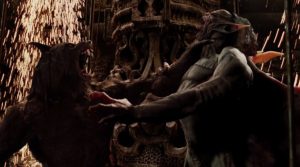 From the director of 1999’s The Mummy, this 2004 Hugh Jackman vehicle combines fast-paced action with famous monsters from film and literature. It’s like if Underworld was a period piece. 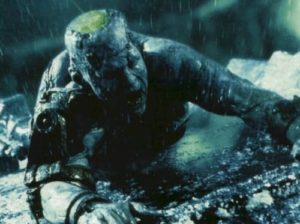 Van Helsing features Dracula, Frankenstein’s monster, several werewolves, and even a cameo by Mr. Hyde, all with a blockbuster makeover. Fans of the original Universal Monsters should make sure to keep an eye out for easter eggs and references, too! 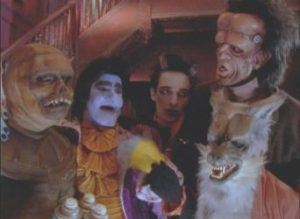 Where can three typical average kids get cybernetic bug armor? Why, a haunted mansion, of course! The heroes of 1996’s Big Bad Beetleborgs get their powers after freeing the jovial Jay Leno ghost Flabber from a pipe organ. Although the Beetleborgs use the Hillhurst mansion as their base, they have to constantly escape the appetites of Flabbers roommates, the Hillhurst monsters!

As a kid, the Scooby Doo-styled hijinks of Count Fangula, Frankenbeans, Mums, and Wolfgang Smith were the reason I watched this show every morning. With some surprisingly decent monster get-ups, I barely even noticed the armored superheroes! 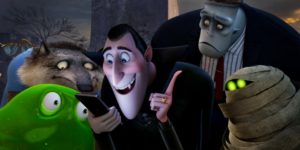 If you want to see how monsters kick back and relax, look no further than the Hotel Transylvania movies! While the main focus is on human-vampire relationships, the real highlight is Dracula and his old monster pals.

Voiced by Adam Sandler and some of his usual entourage, these monsters show us what it’s like to be a bloodthirsty beast turned suburban. Between Frankenstein’s marital bickering, the Wolf Man’s massive litter of pups, and the Invisible Man’s fake invisible girlfriend, Hotel Transylvania is a hilarious dressing down of Halloween horrors. Bonus points for getting Cee Lo Green as Murray the Mummy! 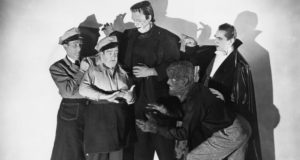 What propels this flick into legendary status, though, is that it’s the original Universal Monsters taking part in the shenanigans. Plus, this is the only time that Bela Lugosi’s Dracula ever appeared alongside Lon Chaney, Jr.’s Wolf Man. Talk about making a mark in film history! 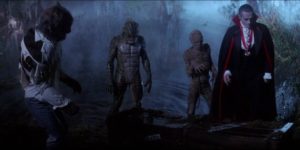 Even the original Universal Monsters can’t beat the awesomeness that is The Monster Squad. With the most and easily the best looking monsters on the list, how could this not take the top spot?

This movie, despite essentially being a Goonies rip-off, is a love letter to those early classics and serves as a sampler platter for monster movies past and present. This is the one that kicked off mine and many others’ love of monsters. Now, as you watch through each movie and show on this list, you mustn’t forget… “Wolf Man’s got nards.”

What is your favorite Monster Mash? Let us know in the comments!