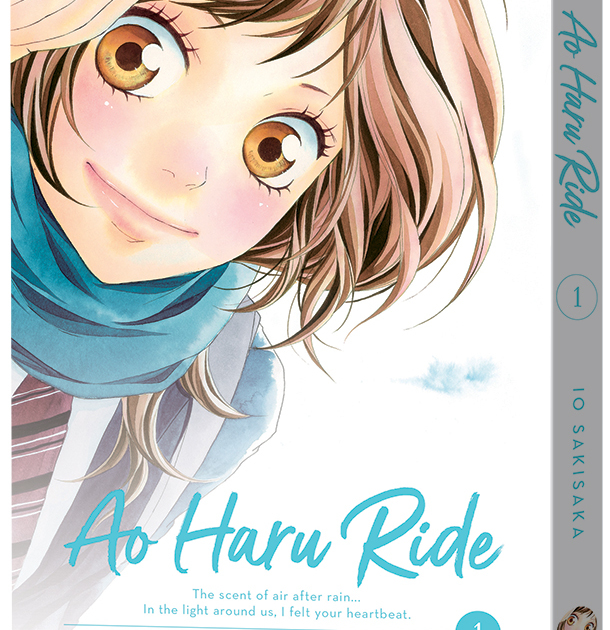 Nerdbot would like to thank Viz Media for providing an advance review copy of ‘Ao Haru Ride’ Vol 1 by Io Sakisaka.

“The scent of air after rain…In the light around us, I felt your heartbeat.”

‘Pretty’ is the word I would use to describe Ao Haru Ride, otherwise known as Aoharaido in Japan. More or less, the title refers to a ‘youth ride’, or the process of growing up and the milestones/pit stops you make during that process. It’s pretty suiting for this lovely piece of slice-of-life shojo manga.

Futaba Yoshioka thought all boys were loud and obnoxious until she met Kou Tanaka in junior high. But as soon as she realized she really liked him, he had already moved away because of family issues. Now, in high school, Kou has reappeared, but is he still the same boy she fell in love with?

The hook and premise are simple, but the characters are super engaging. I didn’t realize how much I wanted to read a good shojo story until I started reading ‘Ao Haru Ride’. And honestly, within the first three pages, I knew I was going to power-blast this manga way too fast and be sad that I didn’t have more to consume.

My feelings were correct.

When the reader first meets Futaba, she is a first year Jr. High student. She meets Kou Tanaka, develops feelings for him (that appear to be mutual), but then he moves. Time jump forward three years and Futaba is a first year high school student in her second semester. (And by the end of the book she’s a second year student). I personally like the time leaps because they feel super organic and fitting to the narrative. She’s spent the last three years thinking about what could have been with “the one that got away/the only boy she could stand/felt comfortable with.”

I feel like this is a super relatable concept when you’re a teenager and/or dealing with crushes and developing feelings. You always wonder what would happen if that one person came back. Also, many early crushes aren’t reciprocated, so ‘Ao Haru Ride’ touches on that feeling of “What if the person you want wants you back?” which is the same emotionally as someone disappearing and returning. However, because Kou comes back sort of rough and tough around the edges, Futaba has two issues on her hands. One, is he the same person I cared about? And two, is the person I care about even a reasonable person?

Kou is a little bit tropey in the fact that he’s a sullen rough boy who is straight forward, not always polite, but shows he cares about Futaba in weird little bursts of kindness. That said, he’s not mean or emotionally abusive. He even calls out that Futaba’s friends are fake friends, which makes her reevaluate her entire approach to friendships. By the end of the book, she disassociates with the mean girls and befriends Makita, the girl that bullies Chie and Asumi talk smack about because she acts too “cute” so the boys will like her (which is so deliciously Japanese that it makes me smile. We in America only know about the “sexy girl” vying for attention or the “fake nerd”. Acting “cute” so guys will like you is just so foreign, I love it).

Yes, the story is simple. But the art is gorgeous and the characters are warm and engaging. I want to learn everything I can about this simple little world. In a way, it gives me the same feels as Kare First Love gave me until the whole “The nerd will be hot once she takes off those glasses and gets her hair out of that ponytail” trope made my eyes roll so hard that they got stuck. My only…I won’t even call it a gripe, but it’s a something in this world, is the artist/author herself.

Io Sakisaka sure has a lot to say.

The book is littered with little notes and letters from her talking about how she doesn’t know what to do with her characters, how drawing them consistently is taking a lot of time, that she’s nervous about publication, that she hopes everyone will like the book, and so on and on and on multiple times throughout the issue. I’m sure many people would find it cute, or endearing, or enjoy how relatable she is, but I just want her to chill out and look the world in the eye. Your manga got published, lady! Have some pride!!!