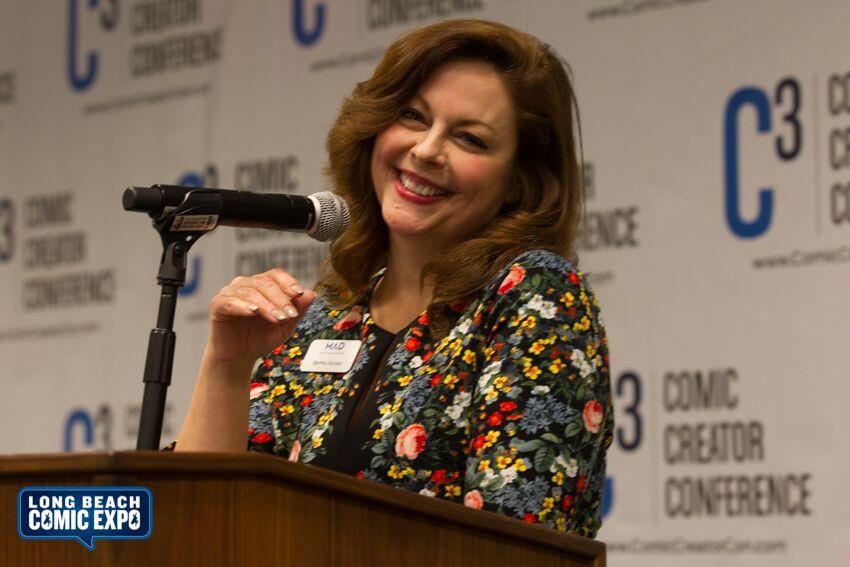 Long Beach Comic Con has been putting on their expo for the last ten years. Now, for the second year in a row, Nerdbot Media is teaming up with Long Beach Comic Con for streaming and interview opportunities across the show. And who better to kick off our interviews than with LBCC showrunner Martha Donato? Between her and Ivan Cohen, director of programming (and the help of many other talented and dedicated staff members), an incredibly full and thought-out convention is fleshed out for comic book fans, cosplayers, shoppers, and people who love panels. With a ‘comics first’ focus this year, Long Beach Comic Con founder says it’s about the writers and artists.

Considering its varying and dynamic guest list, Long Beach Comic Con has been all the buzz in the convention and pop culture scene for weeks! We most certainly can’t wait for the show! And the truth? Having the opportunity to hear all about its inception from the owner and show creator herself only rocketed our excitement to eleven!

Hi Martha and Ivan! So, this is Long Beach’s Comic Con’s tenth show that’s we’re about to experience, isn’t it? Have you owned the show through all of those ten years?

Martha: I’m the founder of the show; I started it in October of 2009. This is our tenth time doing it, but the ten-year anniversary won’t be until 2019. So, this is our tenth year doing it. And yes, I’ve owned it the whole time.

What made you decide to take the plunge and create your own Comic Con amongst all the other popular shows that take place in the Southern California area? I’m curious about the factors that inspired you to first make your own, and second be confident that you would be able to successfully grow the show.

Martha: I produced my first Comic Convention in 1997 in Chicago. So, I was in the business before there really was a business. I produced that Comic-Con and then went on to build a portfolio of shows called Wizard World. They were in Los Angeles, in Boston, in Texas, in Philadelphia, and in New York. And in 2008 when the economy really took a turn for the worse, I got laid off along with most of the company. I went to work for a business-to-business conference production company, and then in early 2009 I decided to start Mad Event Management.

When I called my friends at the Long Beach Convention Center back in early 2009, and asked them if I could produce a comic-con there, I had already done two shows there a few years before. So, I was already known because I had worked with them. And they said yes.  Now, in that time back in 2009, and you just referenced that it’s a crowded market, it was not. There wasn’t really much else happening, especially in Los Angeles. We had San Diego Comic Con and WonderCon, which at the time was in San Francisco. There wasn’t really anything else of significance happening.

Long Beach was my preferred place, and because the economy was still really struggling in 2009 they had some open dates. If I’d tried to do that today, they wouldn’t have the dates. But I got the dates, put together a show, and produced it the first weekend of October. It went great. But to answer your question, it really was a different climate than it is today. Would I try to go out and do it now? You’d be entering a really crowded market. But then, it was not.

What is your personal relationship with fandom?

Martha: Having been in this business for so many years, I’d have to say my relationship with fandom is deep and wide. I was around before there was a cosplay community. Comic-Cons used to just be publishers who were selling comic books and the dealers who were selling the books to the public. I would say I’ve seen a lot of things shift and change over the years. But to me, the most important part of fandom is the relationship with the artists and writers; the people who create the characters. That’s the piece for me that’s most important.

What media do you personally enjoy most?

Martha: Movies, definitely. Back when Marvel first started producing their big hits, like the Spider-Man movies with Sony before they unleashed a can of whoop-ass on the entertainment industry with Marvel Studios, I used to get invited to all the movie premieres. It was in New York where Marvel Comics is, too. At the premieres it was a lot of fun and there was a lot of great energy around that and that carries through. Today they’re still pumping out a lot of movies, and they’re done really well.

Ivan, let’s have you jump in! What’s your role with Long Beach Comic Con? Tell us a little about what you do, please.

Ivan: I’m too modest to say. (laughing) No, I’ve known Martha for years. I worked at DC Comics for a decade and I started there as a marketing person. I worked at conventions from almost the first day I was on the job. I was at the Wizard shows, I was at a show in Chicago right before it became a Wizard show and afterwards, I was at San Diego a number of times too. I actually had a thing happen in my job where I became the managing editor of the superhero line of books for a couple of years, so during that period I didn’t go to San Diego. Back when I did go, the show was manageable. You could kind of set up your booth and go to Coronado for the afternoon.

But when I came back, which was only two years later, it was like “What did you people do while I was gone?! Was I holding you back the whole time?” So, I’ve seen all those sides of it. And as a fan, I was going to conventions in New York when I was eight years old. I met some of my favorite creators when I was a teenager and I see them now, and they don’t remember, but I get to tell them that they changed my life. And that I met them in a grimy hotel basement during Creation-Con or something like that.

But since I left DC after they moved west and was doing a bunch of freelance things, when Kris and Martha approached me about joining Long Beach Comic Con as the Director of Programming, I was really flattered. And I think what they hoped, and I think we’ve been pretty successful, is that my perspective is sort of more editorial and it wasn’t purely driven by “Who’s the writer who’s got the best-selling comic?” No, anybody can make those approaches just by looking at sales figures. There’s no art to that. But trying to figure out creators who are maybe bubbling under or have a devoted following but are not what constitutes a household name and bringing them together and finding interesting combinations of people who can talk about things that aren’t just what they’re going to have Green Lantern do next issue is sort of exciting. Something I can’t just find out anywhere. And as a fan, that’s the sort of stuff I always found interesting.

Continuing with Ivan, what’s your relationship with fandom? What are some of your media interests and are you a fan of anything that might surprise people?

Ivan: I don’t think anything surprises people. When I started working at DC, I was surprised how my comic book collection put me at maybe the middle third of what people I worked with had. I would be like “I have 10,000 comic books!” and they’re say “That’s nice, come back when you have a real collection.” But the job I had before that was in publishing at TV Guide. And there, I’d be like “I love TV!” and my co-workers would say “You like TV, that’s cute kid. Let me tell you about Ernie Kovacs and old TV you’ve never heard of.” But at TV Guide, me being a comic book fan is what set me apart, and at DC Comics, me knowing about TV set me apart.

In the fandom space, I’m still a comics guy. I live in a small Manhattan apartment, so I can’t buy as much stuff as I used to. So, I read a lot more stuff online than I ever thought I would. But I love comics and I still love way too much TV. As someone who has worked in writing and editing comics, I really appreciate well-written ones and get really frustrated by sloppily done things because it doesn’t take much more effort to write a good comic than it does to write a bad one. People work all night to produce the worst comic you’ve ever read.

I really loved hearing about the history of Long Beach Comic Con and how the show was built, so thank you again for that Martha. I want to reiterate that Nerdbot is so excited to partner up with you for interviews and streaming, and just do our part in any shape or form to help make this show as special as possible for everyone involved.

Martha: Thank you! We are too! As someone who has been doing this for a long time, the most important piece you can take away from this conversation is this: we invest all of our energy and everything we do is to make sure the experience for the fan is authentic and real. They’ll be absorbed in their hobby for a weekend with likeminded people. Giving people what they want even if they don’t know they want it when they come. That’s where we invest in really high-quality people like Ivan and Kris and our time and energy.

I did another interview recently where they asked me if I felt like we were the only ones not chasing a rainbow. And yeah, a rainbow is really pretty and sometimes I want to chase it, but then I’m reminded that we’re a comics show. We’re not a celebrity show. We’re not competing against anyone else. We’re doing the best show we can do and the best show we want to do. And when the smoke clears, we’ll all be glad we held the course. Really good programming, art, and writing matters. And when we look back on this, we’re all going to be really proud of what we built.