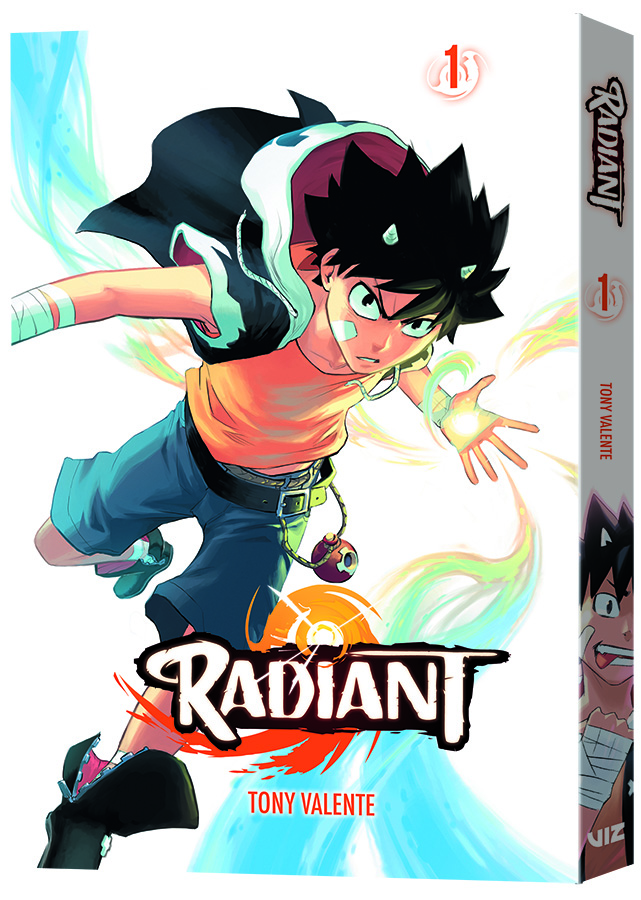 Nerdbot wants to thank to Viz Media for the early review copy of ‘Radiant’ Vol 1 by Tony Valente.

Radiant is a 2013 manga that’s actually not Japanese! Writer/Artist Tony Valente is French, though his debut manga Radiant was in fact published in Japan in 2013. He moved to Canada while writing the series and there perfected his manga-style art. And truly, he has perfected it; this book seriously looks and reads exactly like Japanese manga. I can’t help but wonder if Valente wrote his original book in French and it was the translated to Japanese, and the English translation I’m reading is a Japanese translation from French, or the original French version, or…

Clearly, my head is spinning.

The premise of Radiant is charming. The world is overrun with monsters called Nemesis—and a young boy infected by them will stop at nothing to defeat them all!

Seth is an aspiring wizard living in a pastoral village under the watchful eye of his mentor. Like all wizards, he is an “infected”: one of the few living creatures that has survived contact with a Nemesis, creatures fallen from the sky that contaminate all they touch. His apparent immunity led him to choose a path that seemed to be perfect—to become someone who hunts and fights the Nemesis. But Seth longs for a quest that goes beyond the simple hunt for monsters. He wants to find their home, Radiant. Along with other wizards, he travels the world in search of Radiant, under the sinister eye of the Inquisition…
Seth has big goals of defeating Nemeses, but first he must earn the trust of the very villagers he wants to protect—not an easy task when those who use magic are just as feared as the Nemeses they fight. Even worse, Seth can barely control his monstrous powers! It’ll take more than brute strength—although it’ll take that too—to get Seth’s quest out of the boonies and into the big time!

As you can see, there is a very rich world in play here in Radiant. And truthfully, there are some elements, or even tropes, that might feel familiar to anyone who reads fantasy novels. The fairy tale elements reminded me of Uprooted by Naomi Novak (although this was published first, there are European influence in both stories). Seth himself sort of reminds me of the protagonist from the Earthsea novels by the late Ursula le Guin. The “infection” young wizard Melie has reminds me of the Chameleon character in Piers Anthony’s Xanth novels.

The art has a familiar style; it’s Shonen Jump all the way without being Shonen Jump. In my opinion, this works both for and against the story. On one hand, everything moves super-fast, the action is quick, and the characters are spazzy. Everyone has a lot of personality and they’re all really, really proud of themselves. Which unfortunately, makes for a lot of visual noise on the page. Lots and lots of dialogue. Lots and lots of movement. Lots and lots of things that get lost.

When building a world this complex, it’s important to figure out the best way to convey the information. Unfortunately, Valente has resorted to two methods of storytelling that I personally feel are very weak; the laundry list and the info dump. The laundry list literally being everything that happens in chronological order from when we meet the character until the story ends. And the info dump is when all of the backstory is dumped upon the reader in an exchange of dialogue between a few characters. Nothing is organically discovered, unlocked, or unveiled. It’s spilled out for you overtly in the midst of characters yelling at each other and dangling off walls.

That said, there is a lot of really engaging stuff in here. The story did pull me in and make me care about Seth. I want to know this young wizard apprentice’s backstory and see what happened to him the day he was infected by a Nemesis. I want to see these characters make it to the world they call Radiant (which we learned about immediately in the third chapter). I’m curious about the role Melie will play as a counterpart to Seth. Ultimately, I think if I was younger, I would have loved the screaming-in-your-face assault Radiant presents itself with. But now, I just want the story to slow down and take its time. Because not only is there a ton of information thrown at you per page, but the book felt thick clocking in at four full chapters.

Radiant is a really strong premise with a unique hook that shows a lot of promise. In a world of Harry Pottter, Earthsea, Xanth and other wizard versions of the “I’m gonna be the very best” stories, Radiant has a host of very distinguishable and fun characters that all sound very different from each other. This story has a great appeal for people in the 12-20 year range, and I don’t doubt that Radiant will find its readers.