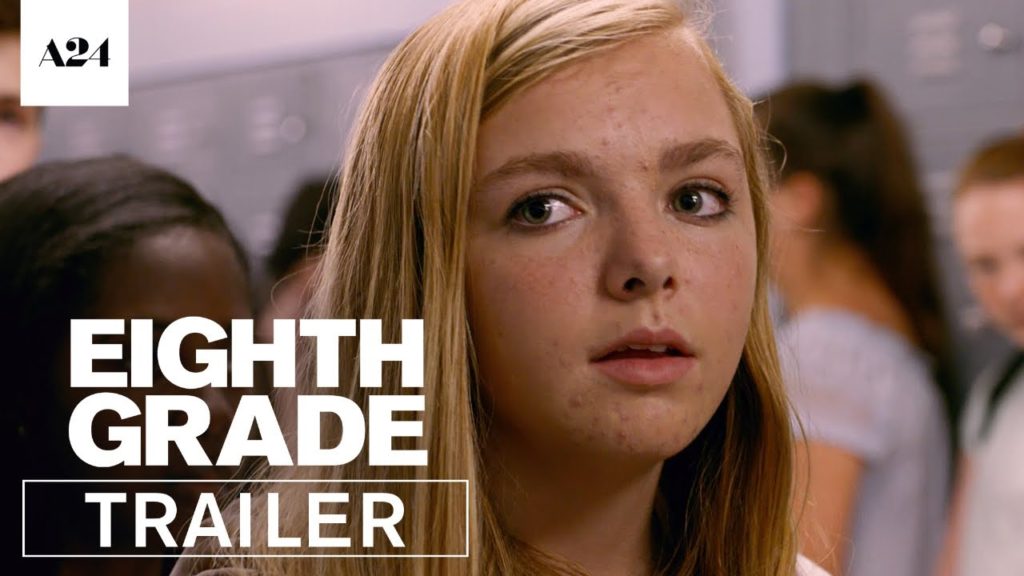 Eighth Grade is a very real depiction of the keystone moments in adolescence where a person attempts to redefine themselves into who they want to be. Bursting with humor and awkwardness, Bo Burnham has successfully checked all the boxes of the ‘coming of age’ genre in a modern and refreshing way. The film doesn’t fall into the formula of outlandishly severe events that define the character, but instead focus’ on many struggles that the main character Kayla (Elsie Fisher) endures in her pursuit to happiness and personal growth. This gives the film a feel of realism that is missing in most ‘coming of age’ films. With no specific ‘major event’ to separate the audience from the character, it allows for a deeper connection between them. As the audience begins to recognize the next looming trope of adolescence, the film resolves the issue in a way not seen before, abruptly and awkwardly with no explanation. This expresses that there are no solutions to avoiding the growing pains of youth.

All of the characters are accurately cast with young actors. This immediately allows the audience to submerse itself in the (sometimes painfully) awkward situations that arise in the story. Dialogue is fluid and realistic, especially when the conversation has Kayla attempting to slyly guide a conversation that is obvious to the audience. Every performance in this film is flawlessly executed. At no time do the events, dialogue, or actions feel forced or unnatural.

Josh Hamilton plays Kayla’s father Mark. He is a single father attempting to be supportive to his daughter as she navigates her own character growth. This dynamic is accurately portrayed as Kayla experiences events that the audience (again, sometimes painfully) experiences with her while Mark only receives the hostility and confusion with no explanation as to why. Regardless of the animosity he is met with, Mark is a loving and caring father that wants nothing but the best for his daughter. These interactions are some of the funniest and most heartfelt moments of the film.

The film subtly speaks on generational experiences. Modern problems are expressed throughout the film and addressed in a way that shows the connection to problems of past generations. Social media is an important factor in the story just as it is in modern social life. Kayla uses this platform to reach out for connection with other people the way that films of previous generations used other plot devices such as sports and clubs. *There is also a scene that shows a safety drill for an active shooter. The casual humdrum tone of the instructor and drills removed the shock value and replaced it with the connection to safety drills of previous generations similar to fire, earthquake, and even nuclear bomb drills from the past.*

The message of generational connection through similar yet different experiences makes this movie more than just another adolescence film, it helps it become a message of unity.

While the story follows an extremely awkward Eighth Grade student, with brilliant acting, writing, and directing, there is something in this film for everyone. I rate this film a 5 out of 5.