Nerdbot would like to thank Viz Media for providing an advance review copy of ‘That Blue Sky Feeling’.

‘That Blue Sky Feeling’ is a brand-new manga series published in August 2018 by Viz Media. It is a collaboration by writer Okura and artist Coma Hashii. The easily digestible story is a coming-of-age high school tale about a chubby, well-meanking, ‘genki’ (you know, happy-go-lucky) transfer student named Noshiro. Because his family moved around so much as a kid and he was always attending new schools, Noshiro knows nothing about romance, crushes, love, or feelings of attraction. But within the first three or four pages of the manga, we’re introduced to a brooding, quiet hot-boy named Kou Sanata. Noshiro notices that Sanata keeps to himself. After he learns from the other students that Sanata might be gay, Noshiro becomes enraged by the rumor and decides to stop at nothing until Sanata befriends him.

Around the second chapter, Sanata tells Noshiro that it’s not a rumor and he really is gay. While initially afraid and in disbelief (because Noshiro apparently has predetermined notions of what a queer person looks/acts like/does), he eventually mellows out and continues the journey of friendship. By the end of the manga, Noshiro finds himself becoming attracted to his new friend, thus embarking on a journey of self-discovery, questioning, and possibly, acceptance. 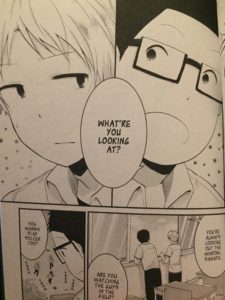 The art in ‘That Blue Sky Feeling’ is really sweet and charming. While contemporary and modern, it has familiar artistic elements to it that remind me of a mid-2000s series, like Chobits or something in that realm. I enjoyed the read and it kept me turning the pages. I quickly became invested in the characters and wanted to see what the stakes were and how everything would be executed. Therefore, I am looking forward to the second book.

That said, aspects of it raise some questions, such as ‘What is it really like to be a gay teenager in Japan today?’

Without understanding how homosexuality is perceived in an every-day Japanese high school setting, it’s difficult for me to understand if this manga is actually addressing any important issues. It takes place in what seems to be a small town, which we all know can be problematic for the LGBT community. Noshiro is said to be from “the big city”, which we can assume is supposed to make him more progressive. Although, by his reaction to learning about Sanata’s sexuality (at first, though it’s a short-lived conflict) we see that he’s all talk and doesn’t know how to react to the news.

What I do like about the dynamic between Noshiro and Sanata is that Noshiro isn’t pretty. Sanata is a sulky Anakin Skywalker fantasy boy, but he’s not sexy. And Noshiro…well…he’s a little unappealing. However, representation for all is imperative, and his genki-chubby-positivity is one I’ve never seen applied to a queer story. So, that feels fresh. However, the manga also adheres to several Yaoi/Yuri tropes that I personally feel have been exhausted. Primarily, the slice-of-life high school setting where the character to fall in love is a new student. Why does the protagonist always have to be a new student? I think there’s strength in ‘we’ve always known each other from afar, but now he has my attention.’ Also, there’s a scene where Noshiro is in a bookstore, picks up a Boy’s Love manga and “wonders” about himself. I feel like I’ve seen this very same scene in many, many slice of life queer manga.

At least this story doesn’t take place in an all-boys school where homosexuality only exists because females have been removed. There are females present and our characters aren’t into them. And while I noted that Noshiro is an architype I haven’t seen in a queer setting before, Sanata most certainly is. As of now, he’s moody and flat much like Mei in Citrus, which I reference because it’s the most recent Yuri show I’ve seen. Hopefully the storyline in ‘That Blue Sky Feeling’ doesn’t dissolve into the standard “we want to be together, but don’t know how to tell each other, and right when we gain the courage to tell each other someone pops out of nowhere to gum up the works (and want to hook up with either Noshiro or Sanata).

This story is going to be a slow burn. Hopefully, the stakes will raise and the characters will become in some true plotline conflicts that have us rooting for them. Because after reading this first book, focusing on “the rumor” for five chapters was somewhat tiring.

Cheers to Viz for adding this LGBT title to their catalogue, we look forward to the next instalment!