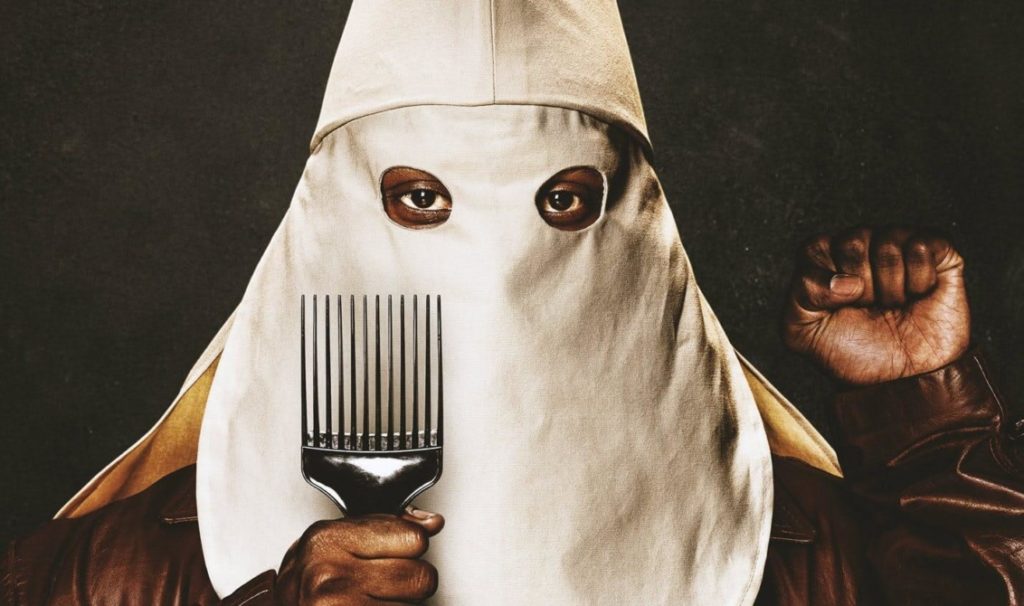 BlacKkKlansman, the new film from singular filmmaker Spike Lee and man-as-Hollywood-rocket ship producer Jordan Peele, is an unlikely, unbelievable, necessary and righteously incendiary horror film. While it is being marketed as something of “you’ll never believe it” (that much is true) true story, with sardonic comic edge, the film is forced to take a turn into puncturing literalism due to current events.

One longs to be in an America where the story of Ron Stallworth, a quickly promoted black police officer in late-70s Colorado Springs that infiltrates and undercuts the Klan, plays as an aghast, rompish, victory lap and finger in the eye of past sins and sinners. But this being Trump’s America and all, a fact the movie cannot and does not avoid, the audience neither can avoid the stark look into a historical mirror that’s more likely to leave you angry than elevated.

The story is unbelievable. Ron Stallworth (a real dude!) grew up wanting to be a cop, even facing the realities of being a black man, hoping to improve both and the relationships between. He believes he can do good. He fights his way through more than a fit of bad and precarious situations to get there, such as racist coworkers and an undercover assignment to monitor “black radicals.” Stallworth doesn’t believe all cops are racist killers and he believes in affecting change from the inside. He’s inspired by some of the great blaxploitation heroes of 70s cinema.

In infiltrating this meeting Stallworth meets the motivated and not so much radicalized as conditioned head of the Black Student Union, Patrice. He finds himself being more drawn to the cause and finds a way to fight for it in his own way by taking advantage of his new position in intelligence as a Detective to monitor the Klan; who just so happened to publish an outreach ad in the paper.

In the second instance of such commentary this summer, Ron is able to do so by calling the Klan hotline, as it were, in “white voice” (in truth, and to a point, an affection not much different than his own, but definitely a different attitude entirely). Ron finds himself invited to a meeting and ingratiated deeper and deeper, but his look – from the obvious, to the afro of choice, obviously precludes this. And thus his partner, the Jewish by lineage but not by culture Flip Zimmerman, plays the “white Ron” in person. And we’re off to the very unlikely, shocking races.

Character names being noted, performances should now be highlighted. John David Washington, who should break out from this, plays the real Ron with a patient dignity and nobility that harkens to Dr. King’s codas even when the audience and his circumstances beg him to Malcolm X. His catharsis’s are especially, well, cathartic and his optimistic aspirations for the culture, police force and country can inspire. They also sometimes show a dangerous naiveté that is fair for a rookie, and is reminiscent of one shared by most until the waning hours of a dark November Tuesday in 2016.

Adam Driver, breaking the Star Wars curse a dozen times over now, is fantastic as Zimmerman – the “white Ron” and hesitant to aware to activated partner. Laura Harrier, grown up overnight from her appearance as “Liz” in Spider-Man: Homecoming, is cracklingly, luminously, righteously angry and charming as Patrice – and a true star. Everyone else in the film equally delivers, sometimes to unsettling degrees, character actors are convincingly ruled by the epitaphs the unfurl. Notably Topher Grace plays a great oblivious and oily David Duke and I, Tonya breakout Paul Walter Hauser shows continued and impressive naturalism as another overreaching doofus.

But while the film sometimes, and justifiably, aims to show the KKK villains — uneducated, hypocritical, impotently and misguidedly enraged — as rubes, this creates a tension with the danger they truly pose as a bombing plot takes shape, and more urgently, abhorrent speech and action underline how these jokers are actually fuses.

Spike Lee shows why he’s such a fantastic filmmaker even if he doesn’t have some of his contemporaries batting average. It hardly matters when he has such ambition, prolificness and point-of-view. BlacKkKlansman should land in the higher tiers of his filmography and will certainly demand replay and discussion over the years. It’s gorgeously shot, with a tactile filter and popping color to make Instagram envious, and with no surprise since cinematographer Chayse Irvin also shot Queen Bey’s Lemonade. It has another tension-mounting, heart-wrenching score by Jazz great and Lee joint regular, Terence Blanchard who knows how to go for the emotionally raw as well as his director. The editing is crisp, and the Lee flourishes, from inserts to tracking shots are intact and well used, and welcome reminders of Lee’s craft.

But talking about what BlacKkKlansman really is, especially without giving too much away, might best be served by the mention of two of it’s producers — Get Out’s Jordan Peele and horror-savant Jason Blum — regardless of their actual levels of involvement. Because at the end of the day, that’s what BlacKkKlansman becomes. In a world where just a year ago people were killed and injured resisting Nazis and white supremacy in Charlottesville, Virginia, while David Duke himself heralded the violence (events the movie doesn’t shy away from in a powerful, effecting epilogue), Klansman is terrifying, enraging, warning. The movie has laughs and entertainment value certainly, but it will also hollow out your bones.

Two sequences alone necessitate your ticket price and elevate Lee’s film into something more evocative, visceral; like standing in art gallery, a memorial, or funeral of American ideal. In the earlier sequence, when Stallworth “infiltrates” a speech by former Panther member Kwame Ture, the audience enters church as an excellent and perhaps more enigmatic than ever Corey Hawkins gives a speech that uplifts even as it provocates — but doesn’t lie. The speech, unfortunately, with lamentations of innocent black men, women and children being gunned down in the streets, would hardly be out of place at a protest today. It is powerful, and Lee knows to shoot the faces of his crowd not literally, but on an ethereal plane — a more contemplative place of the heart. We, like our hero Ron, are left what to make on the balance of reality, rhetoric and approach.

Later in a pique (yes, that pique) juxtaposition to nearly create a fugue state, Lee cross-cuts between a Black Student Union meeting and and a Klan initiation where “white power” and “black power” are chanted across each other, across town, on screen. In this sequence a surprisingly welcome, and truly iconic (Jay-Z feuds being left at the door) Harry Belafonte as an aging civil rights leader tells the true story of the 1916 lynching and torture of Jesse Washington. A wrongly convicted black man, mentally retarded no less, who was beaten, castrated, disembodied and burned as crowds gathered like it was a parade — and images of the unforgivable cruelty were printed on postcards later as souvenirs. At the same time Topher Grace’s Duke initiates his new Klan members with blasphemous holy water and celebrates with a hooting and hollering viewing of Birth of a Nation — which you’ll know something about if you went to film school, or if you pay attention to either Belafonte’s monologue or Lee’s chosen excerpts — spoiler alert, it’s bad. Very bad.

What we’re left with, from these pieces and a gutting, fist-clenching climax, besides rage is a kind of terrible dramatic irony. In an alternate timeline BlacKkKlansman could have been a semi-comic vision of the past, instead of a horrific indictment of the present. “America First!” is chanted at rallies, Duke intones of Making America Great Again, fear of minorities, equality, Jews, gays, immigrants runs rampant — it would all be a bit too on the nose, if it wasn’t just real. It offends as it’s meant to. As an audience you practically beg for relief from all this, even as most of is do from the news cycle. But the film, and if we’re courageous enough, reality, won’t let us hide.

In one exchange we realize we’ve failed where Ron does — in a discussion regarding Duke he laughs at his white co-officer’s suggestion that the aim could be political, to, through influence and stoked fears get someone like Duke in the White House. Impossible. Americans would never. And yet…

There’s no way to watch Klansman as it is without also looking at what we’ve become, and there shouldn’t be. It is very much Lee’s intention. The joke is very much on us until we fix it. Ultimately it doesn’t much matter how BlacKkKlansman succeeds as an insular film, in it’s complicated balance of tones and aims – it is necessary, and it ends squarely on us. After all, from Lee’s Colorado Springs to Trump’s Charlottesville, this is a true story. And it is ours.